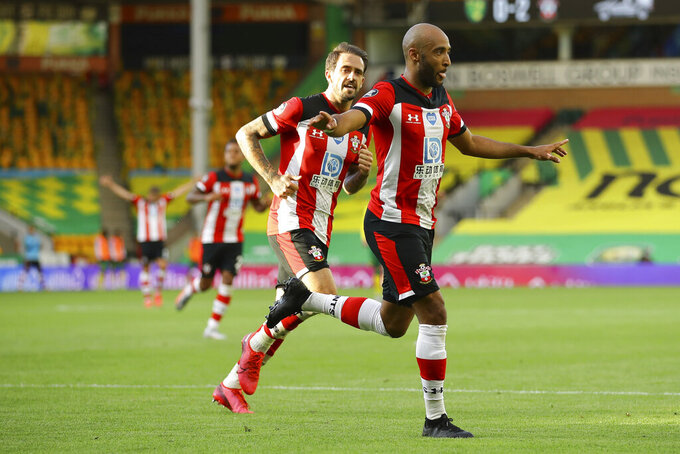 NORWICH, England (AP) — Norwich’s hopes of staying in the English Premier League were dealt a blow by losing to Southampton 3-0 on Friday as the teams returned to action after the enforced three-month pandemic suspension.

Norwich is six points from safety while Southampton moved 10 points clear of the drop zone after second-half goals from Danny Ings, Stuart Armstrong and Nathan Redmond.

As at Wednesday’s restart matches, both sides took a knee as part of the Black Lives Matter movement after observing a minute’s silence for the more than 42,000 known COVID-19 victims in Britain.

Southampton turned its dominance into goals four minutes after halftime. Norwich failed to deal with a throw-in on the left and Armstrong set up Ings, who curled a shot from just inside the box past goalkeeper Tim Krul into the top right-hand corner.

The roles reversed in the 54th minute as Saints extended their advantage. Ings played the ball to Armstrong, who showed good control and a cool head before shooting low into the net.

The third arrived in the 79th minute. Michael Obafemi cut the ball across to Redmond, who all too easily took the ball past Ben Godfrey and struck low past Krul.