NOT REAL NEWS: A week of false news around the coronavirus 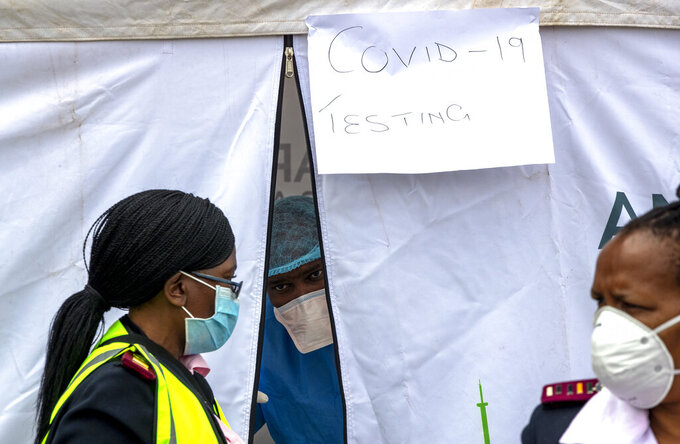 FILE - In this Wednesday, April 8, 2020 file photo, health workers wear personal protective gear inside a COVID-19 testing tent in Lenasia, south of Johannesburg, South Africa. On Friday, April 10, 2020, The Associated Press reported on stories circulating online incorrectly asserting that former U.S. President Barack Obama said that he would not “allow white people to kill Africans with their toxic vaccines.” The fabricated claim shared across social media grew out of a French TV segment where two doctors suggested that a tuberculosis vaccine be tested in Africa in trials to fight the coronavirus. (AP Photo/Themba Hadebe)

CLAIM: Tonic water or quinine supplements can be used to prevent or treat coronavirus symptoms.

THE FACTS: Medical experts say as of now there is no proven medication or home remedy that can cure coronavirus. Posts circulating on Facebook and Twitter suggest that drinking tonic water from Schweppes or Fever-Tree will work to treat the new coronavirus because the drinks contain quinine. Quinine is a compound found in the bark of the Cinchona tree and has been used to treat malaria. Malaria drugs like chloroquine and hydroxychloroquine are the synthetic form of quinine. “I would not encourage anyone to drink tonic water to prevent or treat covid at all,” said Dr. Michael Angarone, assistant professor of infectious diseases at Northwestern University Feinberg School of Medicine. Social media users appear to be suggesting there is no difference between quinine and hydroxychloroquine, which has been touted by President Donald Trump as a treatment for coronavirus. Hydroxychloroquine has not been approved as a drug to treat coronavirus and medical experts have not concluded whether the drug is safe or effective for this use. “The data so far in terms of therapeutic efficacy are pretty shaky,” said Dr. David Hamer, a professor at Boston University School of Public Health and School of Medicine and physician at Boston Medical Center. Other posts tout a combination of tonic water and zinc, an idea that gained traction after a St. Louis chiropractor posted a video recommending the combination. Experts say there is no scientific evidence that quinine would have any impact if used in this way. The concentration used for medical use is different from the concentration of quinine used in soft drinks, said Dr. Humberto Choi, a pulmonologist at Cleveland Clinic. As far as taking tonic water and zinc, Choi said while zinc has been studied to see if it could help protect organs against low oxygen supply in cases of severe lung infection or inflammation, it has not been proven to treat the infection itself. “I don’t think people should be fooled to think they are ingesting something that is causing any benefit to them,” he said. Tonic water companies like Fever-Tree are debunking the myth online. “We would not advise using our tonic water for anything other than making a tasty drink to keep your spirits up during this difficult time,” the company states on its website.

CLAIM: Maps show a correlation between confirmed COVID-19 cases and locations where 5G wireless service has been installed.

THE FACTS: There’s no evidence that 5G, fifth generation wireless, is related to or causes COVID-19. Photos of two maps placed side by side are being used on social media to suggest they show a correlation between 5G networks and coronavirus hot spots. One map claims to show where confirmed coronavirus cases are located in the U.S., while the other map claims to show where 5G technology was installed. Both are highlighted around population centers. “Im just gonna leave this right here... For those folks that still dont see whats really going on,” one Facebook post claimed. For months, conspiracy theories have circulated attempting to link the rise in coronavirus cases to 5G networks. The bogus claim gained fresh attention on social media when China rolled out 5G wireless around the time that coronavirus cases spiked in the country. Then, in early April, numerous cell towers in the U.K. were set on fire after false conspiracy theories circulated linking the coronavirus to 5G networks. “As we see it, there is absolutely no connection between COVID-19 and the 5G cellular service,” professor Myrtill Simkó told the AP. Simkó is the scientific director of SciProof International in Sweden, and author of a report examining 5G wireless communication and health effects. Experts studying or working on the rollout of 5G service said the map used in the Facebook post showing service availability does not provide an accurate picture of what’s happening with 5G expansion. For example, T-Mobile has 5G coverage wider than what is shown on the map used in the Facebook post. And Ookla, a company that provides fixed broadband and mobile network testing applications, also has a map that shows 5G service in the U.S. extending beyond what is depicted by the post. “Telecom providers tend to roll out new technologies (not just 5G) in urban areas where the most people can experience the new technology the quickest. That’s why some people see a seeming correlation between 5G availability and urban populations where COVID-19 epicenters have been identified,” a representative with Ookla said in an email to the AP. Beyond such comparisons, there is other evidence to refute the link. South Korea was the first to launch 5G wireless in April 2019, months before COVID-19 cases were announced in December 2019 in Wuhan, China. On the flip side, Japan didn’t launch 5G until March, yet the country reported its first coronavirus infection in January.

CLAIM: Former President Barack Obama said that he would not “allow white people to kill Africans with their toxic vaccines.”

THE FACTS: The fabricated claim shared across social media grew out of a French TV segment where two doctors suggested that a tuberculosis vaccine be tested in Africa in trials to fight the coronavirus. The doctors were accused of racism for the comments they made on the French news channel LCI earlier this month, with celebrities like soccer star Didier Drogba and actor John Boyega sharing their outrage on Twitter after a video with the doctors’ comments circulated online. Dr. Matshidiso Moeti, the World Health Organization’s regional director of Africa, also shared a clip of the doctors on Twitter, calling the video deeply upsetting. “All research including on #COVID19 in this global crisis must be ethical and based on principles,” she said. The French National Institute of Health and Medical Research tweeted on April 2 that the edited video had been taken out of context on social media. Shortly after the video emerged online, social media users began sharing posts suggesting that Obama had asked Africans not to accept vaccines from America and Europe and urged people to share the message everywhere. “I’ll be an accomplice if I don’t denounce this evil act white people want to do to Africans, first of all I was born in America but I’m African blood, I’m not going to allow white people to kill Africans with their toxic vaccines,” the false post reads. “I ask Africans to be smart, and to ensure that coronavirus vaccines do not enter African territories, there is a Machiavellian plan they invent saying we come to help Africans, or that they will come to kill you.” Obama did not say this and is pro-vaccination, said Katie Hill, his spokeswoman. Obama has tweeted about the virus urging people to protect themselves by washing their hands and he has shared multiple news articles about the virus. The fabricated quote was shared hundreds of times across WhatsApp, Facebook, Twitter and Instagram in English and French. Some posts with the false information included a photo of Obama crying during a speech on gun violence that referenced the mass shooting at Sandy Hook Elementary School that left 26 people dead, including 20 children.

CLAIM: Due to the COVID-19 pandemic, effective immediately, Walmart is adopting a staggered shopping schedule based on age.

THE FACTS: Walmart is offering special hours for seniors but has not designated times for people to shop by age group. Stores around the U.S. — including Walmart — are offering special hours to cater to seniors, who experts have said could be more vulnerable to the new coronavirus. A post circulating on Facebook, which features logos for Walmart and Sam’s Club, falsely states that the discount retailer is establishing shopping days based on age groups. The post apologizes for any inconvenience before breaking out when age groups can shop; Monday age 66+, Tuesday 56-65, Wednesday 46-55, Thursday 36-45, Friday 25-35, Saturday 24 and below, Sunday shopping emergency only. Rebecca Thomason, a Walmart spokeswoman, said in an email that the staggered shopping schedule featured in the posts is false. Walmart revised its shopping hours to provide for greater social distancing during the coronavirus pandemic. They are posted on the company’s website. “From March 24 through April 28, Walmart stores will host an hour-long senior shopping event every Tuesday for customers aged 60 and older. This will start one hour before the store opens,” the company states on its site.

THE FACTS: A set of photos circulating on Facebook that shows dozens of dead birds scattered in the street and on sidewalks was falsely described as showing the effects of electromagnetic radiation. “Can you imagine what the 5G will do to us,” wrote one Facebook user who shared the photos. The photos date to Feb. 4, when strong winds knocked over a tree on Viale del Policlinico, a road in Rome. According to Italian media outlets, when the tree fell over, a man was injured and a several birds that had made their nests in the tree were killed. Photos and video published at the time showed the fallen tree next to dozens of dead birds. The World Health Organization states on their website that 5G in wireless technologies does not pose health risks. “To date, and after much research performed, no adverse health effect has been causally linked with exposure to wireless technologies.”

This is part of The Associated Press’ ongoing effort to fact-check misinformation that is shared widely online, including work with Facebook to identify and reduce the circulation of false stories on the platform.