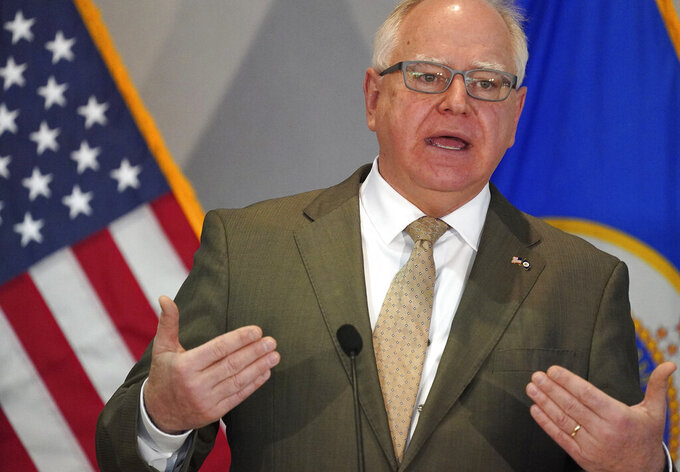 Minnesota Gov. Tim Walz answers a question from a reporter during a news conference to debut his state budget plan for the next two years Tuesday, Jan. 26, 2021 at the Department of Revenue building in St. Paul, Minn. (Anthony Souffle/Star Tribune via AP)

MINNEAPOLIS (AP) — Minnesota's budget outlook has swung from a near $1.3 billion deficit to an almost $1.6 billion surplus, state economists announced Friday, an improvement that could ease the big debates for the rest of the legislative session over taxes and spending.

Democratic Gov. Tim Walz called for raising taxes by about $1.8 billion on the wealthiest Minnesotans and large companies as part of the $52 billion budget proposal he laid out a month ago, which compares with the $48 billion budget approved in 2019. The higher taxes would help fund more spending on education and the state's recovery from the coronavirus pandemic, but the governor expressed some willingness to compromise Friday.

“Now democracy starts,” Walz said at a media briefing. He noted that Minnesota has the only Legislature where different parties control the two chambers and they're required by law to agree on a balanced budget.

Walz said his priorities are fairness and recovery not only from COVID-19 but also systemic inequalities in wealth, education and more. Top Democratic legislative leaders expressed similar priorities, and indicated they weren't ready to give up on raising more revenue to help those left behind in the economic recovery.

Republican and business leaders were quick to say Friday that the projected surplus shows there's no need to raise taxes, and that doing so would hurt jobless workers and businesses that are still struggling to stay open due to the pandemic.

GOP Senate Majority Leader Paul Gazelka, of East Gull Lake, who likely has the votes to block tax increases, welcomed the “amazing turnaround” and reiterated Friday that his chamber won't go along with higher taxes. Instead, he and other Republicans called for ensuring that the forgivable loans that small businesses received under the federal Paycheck Protection Program aren't subject to state taxes

“We have a $1.6 billion surplus right now," said Republican House Deputy Minority Leader Anne Neu Brindley, of North Branch. "If that is not enough to figure out how to fund our government, then I'm not sure what we do, I'm not sure how we move forward.”

Minnesota Management and Budget Commissioner John Schowalter said the rosier projection is due to an improved U.S. economic outlook, which has been bolstered by stimulus measures the federal government has taken since the state agency issued its last forecast in November.

The budget agency no longer anticipates a $1.28 billion shortfall for the upcoming two-year budget period, which begins July 1, and is now projecting the $1.57 billion surplus because of a higher revenue forecast, lower projected state spending and an increased surplus for the current fiscal year, which ends June 30.

The forecast presumes that Congress will pass a new COVID-19 relief bill in the coming weeks, but makes no assumptions about how much of that aid will flow to the state government. GOP Rep. Pat Garofalo, of Farmington, predicted the share for the state and local governments could be huge and said it should be enough to satisfy the state's needs.

“We have weathered a tumultuous year, and are well aware that the effects of COVID-19 continue to hurt many Minnesotans both in health and in their pocketbook,” Schowalter said. “But brighter days are ahead. Increasing numbers of people getting vaccinated, lower test positivity, put some wind in our sails.”