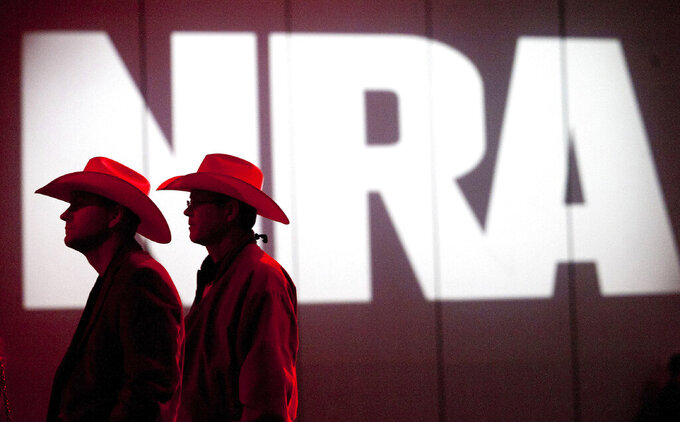 FILE - In this May 4, 2013, file photo, National Rifle Association members listen to speakers during the NRA's annual Meetings and Exhibits at the George R. Brown Convention Center in Houston. The Los Angeles City Council, Tuesday, Jan. 21, 2020 repealed a law requiring companies that want city contracts to disclose whether they have ties to the NRA. The 12-0 vote comes weeks after a judge blocked the city from enforcing the ordinance.(Johnny Hanson/Houston Chronicle via AP, File)

The National Rifle Association has laid off dozens of employees, canceled its national convention and scuttled fundraising, membership and shooting events that normally would be key to rallying its base in an election year.

The coronavirus pandemic has upended the gun-rights organization during what should be heady times for the group, in the middle of presidential election and with gun owners riled up over what they see as an effort by authorities to trample on their Second Amendment rights.

The NRA, which boasts about 5 million members, in recent weeks laid off or furloughed dozens of employees, imposed a four-day workweek for some employees and cut salaries across the board, including for CEO Wayne LaPierre. The financial issues, combined with the cancellation of fundraisers and the national convention, which would have surely drawn a visit from President Donald Trump, have complicated its ability to influence the 2020 election.

In a memo to staff, LaPierre said 20% salary cuts were across the board while some senior staffers “voluntarily” reduced their wages even more. He said the staffing reductions and other changes were intended to be temporary.

“The cancellation of the annual meeting had a significant financial impact but, beyond that, the health crisis has caused us to postpone countless fundraising and membership events along with competitions, training seminars and other revenue streams — those disruptions are the primary drivers of our decision-making process,” said Andrew Arulanandam, spokesman for the NRA. “Like every other business and nonprofit, we are forced to make tough choices in this new economic environment.”

The coronavirus has exacerbated financial woes that were already serving as a drag on the NRA as it wages legal fights with regulators and its once-loyal marketing firm and faces anger from rank-and-file members over stewardship of the gun group. It's also facing rising public frustration over gun laws in the wake of mass shootings.

“Everybody’s in the same boat as the NRA. The NRA’s real problem is they had real existing financial problems before this happened,” said Robert J. Spitzer, chairman of political science at the State University of New York at Cortland and a longtime watcher of the NRA. “It simply does not bode well for their impact on the upcoming election.”

The cutbacks have coincided with the NRA finding a new platform for its message during the pandemic.

With the world panicked over the coronavirus, Americans bought record numbers of guns in March, based on background check data that is the best barometer of firearms sales in the U.S.

The NRA and other gun-rights groups have been aggressively filing lawsuits challenging authorities in places across the U.S. that have declared gun shops and ranges as not being “essential” businesses and therefore allowed to remain open during stay-at-home directives. Gun owners have been flocking to state capitols to protest the restrictions, most prominently in Michigan.

The immediate hope is that such legal challenges will persuade authorities to back down. But the NRA is also hoping the legal fights over “essential” activity will strengthen their hand in the courts and make it harder to restrict gun rights in the future.

All of this comes against a backdrop of a rough couple of years, with legal fights, public and corporate backlash over guns and criticism of LaPierre's salary, leadership and extravagant spending habits.

LaPierre earned about $2 million in compensation, according to the group’s most-recent tax filings. The NRA would not say how much of a pay cut he’s taking.

“Defending freedom has never been easy. Over the years, we’ve weathered more tough times than most," LaPierre said in an email to NRA employees, obtained by The Associated Press. “But we will rise from this stronger and well positioned to lead the fight to protect our Second Amendment, the First Amendment, and all our constitutional freedoms during the crucial upcoming elections and for years to come."

The 2018 massacre at a high school in Parkland, Florida, led to a groundswell of opposition to the NRA, driven by student-led protests over gun violence. Corporate America began pushing back, with some major retailers stopping gun sales and banks dropping discounts or certain services for NRA members and gunmakers.

Just this week, the CEO of Wells Fargo, a bank known for its past willingness to be the go-to bank for the firearms industry, said its relationship with the NRA was “declining."

The NRA also faces regulatory pressures in New York, where the group's charter was created in New York. The state attorney general there has launched legal actions along with her counterpart in Washington, D.C., that threaten the NRA's nonprofit status.

After spending $30 million in 2016 toward efforts to elect Trump, the NRA saw its political influence wane in 2018 when it got outspent by several gun-control groups.

Save the Second, a group of NRA members seeking changes to the organization, called the recent cutbacks the result of poor choices for years not the coronavirus.

In a recent email to its followers, the group disputed putting blame on the pandemic: “Mr. LaPierre, if your organization was squeaky clean and ethically ran, we wouldn’t be in this mess in the first place.”

Gun-control groups are mobilizing to influence the 2020 election and contend the NRA's financial troubles will leave it incapable of playing a significant role in Trump's campaign.

“I would be shocked if the NRA were able to sustain the investment in support of Trump in 2020 that it made in 2016,” said Peter Ambler, executive director of the Giffords group, named after former Congresswoman Gabby Giffords, who was seriously wounded after being shot in 2011.

Spitzer said the NRA's base — many of whom are Trump supporters — are still active and still loyal. “That hasn't really changed,” he said.

But the money challenges are likely to mean a more-muted voice.

“You need to have an open checkbook to have a seat at the table,” he said.