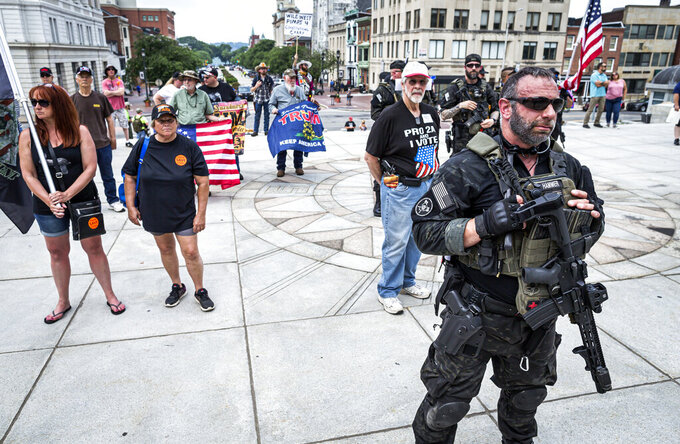 The annual "Rally to Protect Your Right to Keep and Bear Arms" is held at the state Capitol in Harrisburg, Pa., Monday, June 7, 2021. (Dan Gleiter/The Patriot-News via AP)

But, it turns out, the NRA's message has become so solidified in the Republican Party that even if the organization implodes from allegations of lavish spending and misuse of funds, its unapologetic pro-gun point of view will live on, as the heated debate increasingly shifts from Washington to the states.

Not even the shift in power to Democrats in the White House and Congress has been enough to push through new federal restrictions, and states continue to pass laws with far-reaching protections for gun owners.

Ever confident, the NRA, which is based in Fairfax, Virginia, says the suggestion it is receding is magical thinking on the left. The group promises it will emerge from its failed bankruptcy effort stronger, particularly as it seeks to relocate to the decidedly pro-gun rights state of Texas.

The durable nature of the NRA’s clout is an exemplar of how difficult it is to claw back control from an entrenched lobbying powerhouse that has planted deep roots in the American political system with money, organization and relentless messaging.

“The NRA built up an impressive mountain of power over the course of 40 years. And despite their recent fall from grace, that power doesn't disappear overnight,” Sen. Chris Murphy, D-Conn., said in an interview.

Not to say there is no hope for gun control — far from it, said Murphy, whose own views are shaped by the massacre of 20 children at a school in Newtown, Connecticut, on Dec. 14, 2012, and the subsequent, successful effort by the NRA to stop gun legislation in the aftermath.

He said Democratic gains in Congress, despite the efforts by the NRA to stop candidates, are one measure of a change in the dynamic. Another is a shift in some public opinion. A Gallup poll in 2019 found the percentage of people viewing the NRA favorably dropping below 50% for only the second time in three decades.

“There’s no doubt that their political muscle is reduced,” Murphy said, adding that the Georgia special elections for U.S. Senate, won by Democrats Jon Ossoff and Raphael Warnock in January, are a clear indication of that. "Democrats who support universal background checks are winning all over the country, including in states where you would have thought the NRA had a stranglehold.”

One of Biden’s first executive orders was on gun control. On Monday, the Justice Department announced model legislation for red-flag laws, which permit police to ask for the removal of firearms from people who may present a danger to themselves or others.

In March, the House passed two bills requiring background checks on all firearms sales and transfers and allowing an expanded 10-day review for gun purchases. But the legislation faces strong headwinds in the Senate, with some Republican support required for passage.

At the same time, though, the NRA has been growing, with 225,000 additional dues-paying members since January. It has more than 5 million members overall — an increase — but its numbers are still down from what it said were 6 million members in 2018. Its embattled leader, Wayne LaPierre, has led the fundraising efforts for nearly three decades, selling himself as an aggressive guardian of the Second Amendment right to bear arms.

He positioned the lobby as the major antagonizer of Democratic administrations. Then, in 2016, the organization spent more than $30 million on behalf of Donald Trump's campaign, according to Federal Election Commission data. The effort paid off — after back-to-back mass shootings in El Paso, Texas, and Dayton, Ohio, Trump seemed inclined to take action on extensive background checks but backed off after a phone call with the NRA.

Those successes were happening while the NRA was having major problems within. By 2018, the organization had a $36 million deficit because of lavish spending. A class action lawsuit by members over mismanagement and a lack of transparency followed in 2019. And then, New York Attorney General Letitia James, a Democrat, sued to disband the group, arguing it was “fraught with fraud and abuse.” In Washington, D.C., the Democratic attorney general sued over improper diversion of funds.

The NRA filed for bankruptcy in January, but the effort was rejected by a judge. During the trial, an embarrassing deposition by LaPierre emerged in which he said he’d borrowed a friend’s 108-foot (33-meter) yacht to hide multiple times between 2013 and 2018 after threats following multiple mass shootings.

Even with that inner turmoil, the NRA has also been behind hundreds of successful efforts to loosen gun laws in the states — most recently working to persuade states to abandon requirements that people get training and pass background checks to carry concealed handguns.

The NRA is far from the only pro-gun group at the table in state legislatures now. In Utah, one of the first states to remove permit requirements this year, it was just one of at least six gun rights groups speaking in favor of the bill at the Capitol — and it wasn’t the most outspoken one.

The number of generally pro-gun rights states outnumbers those that pass gun control measures 40 to 10, although the latter have more people, so the country’s population is about evenly divided between the two camps. And a Pew Research Center report released in April found the number of Americans who favor stricter gun laws has declined this year to 53%, down from 60% in September 2019.

“Gun rights, the Second Amendment, the right to keep and bear arms is bigger than any organization,” said Jordan Stein, communications director for the Gun Owners of America, one such group.

Gun owners would continue fighting if the organizations that often help them organize and coordinate around the issue were gone, he said.

Recent gun sales suggest a new zeal for owning a weapon. Gun dealers sold more than 2 million firearms in January, a 75% increase over the same month last year and the biggest-selling January on record, according to the National Shooting Sports Foundation, an industry trade group. The FBI, meanwhile, reported 4.3 million firearm-related background checks, the highest monthly total since the system was created over two decades ago.

While the NRA is easily the best-known gun lobby, Josh Horwitz, the executive director of the Coalition to Stop Gun Violence, said the real players are the state gun groups.

“We’re in a generational battle," he added. "Guns in America is going to be a big fight for a long time.”

Despite its troubles, the NRA remains confident in its prowess.

The organization, which in January reported total assets of about $203 million, liabilities of about $153 million and $31 million in bank loans, said in court papers it saw revenues drop about 7% because of the coronavirus pandemic. To cut costs, it laid off dozens of employees and canceled its national convention.

Last month, a federal judge in Dallas dealt another blow to the lobby when he dismissed its bankruptcy case, because he found it was not filed in good faith.

But it has also balanced its budget and is again in the black after years of deficits.

“Coupled with our typical excellent report card on legal and legislative advances and wins, the record is clear: the NRA is as strong and effective as ever as we confront President Biden’s anti-gun agenda," said Andrew Arulanandam, the NRA's managing director for public affairs.

"Any suggestion to the contrary is wishful thinking from our adversaries.”