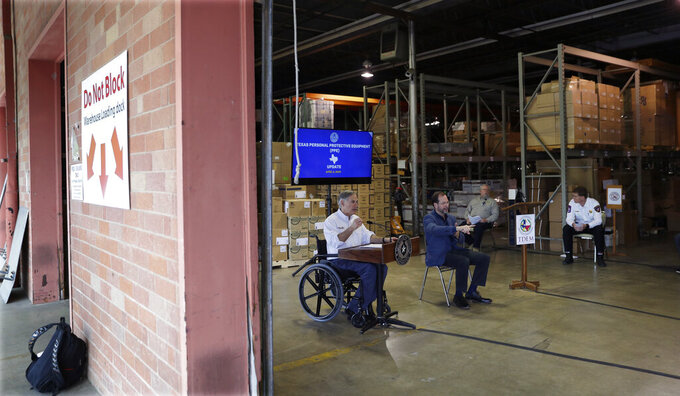 Texas Gov. Greg Abbott, left, with Texas Department of State Health Services Commissioner John Hellerstedt, second from right, and Texas Division of Emergency Management Chief Nim Kidd, right, gives an update on the COVID-19 outbreak at the Texas Department of Public Safety warehouse facility in Austin, Texas, Monday, April 6, 2020. The new coronavirus causes mild or moderate symptoms for most people, but for some, especially older adults and people with existing health problems, it can cause more severe illness or death. (AP Photo/Eric Gay)

AUSTIN, Texas (AP) — Texas Gov. Greg Abbott says about 30 nursing home residents near Houston who tested positive for the coronavirus are receiving treatment with an anti-malaria drug not yet officially approved for fighting COVID-19. He also said Texas is on a path to be well-stocked with protective equipment, like masks and gloves, for medical workers. Hospitals have said shortages remain.

Here's the latest from Texas on Monday:

UNPROVEN VIRUS DRUG GIVEN TO PATIENTS

Abbott's announcement that hydroxychloroquine was being used on patients at a Texas City nursing home appeared to be the first time the governor has mentioned the drug as a treatment in Texas since the coronavirus crisis began.

Galveston County health officials announced last week that more than 80 residents and staff members at The Resort at Texas City tested positive for COVID-19, the illness caused by the novel coronavirus. Abbott said many of the patients given hydroxychloroquine were in their second day of treatment.

President Donald Trump has promoted the drug as he grasps for ways to sound hopeful in the face of a mounting death toll and with the worst weeks yet to come for the U.S. But medical officials warn that it’s dangerous to be hawking unproven remedies, and even Trump’s own experts have cautioned against it.

Some limited studies have been conducted on the use of hydroxychloroquine and antibiotic azithromycin in concert to treat COVID-19, but they have not included critical control groups that scientists use to validate the conclusions.

It was not immediately clear who authorized the drug use for the Texas nursing home patients. The state acquired 10,000 bottles of hydroxychloroquine exclusively for hospital use during the pandemic and has distributed about 500 bottles so far, said Chris Van Deusen, a spokesman for the Texas Department of State Health Services. But he said none of the state's supply was given to the residents of the nursing home.

Abbott did not offer his own thoughts on the drug Monday, telling television station KAVU that “This is a very serious medical decision, a decision that must be made by doctors.”

MORE SUPPLIES ‘ON THE WAY'

Texas is on track to receive more than 5 million additional masks this week for front-line medical workers, Abbott said. He also said more than 2.7 million gloves and 1.6 million face masks have been distributed in the past week.

“Knowing the information of what I have and the visibility of what's coming in, Texas looks to be very well supplied," Abbott said.

But hospitals are still in need. Texas Hospital Association spokeswoman Carrie Williams, who said last week there was not enough protective equipment in the state, said her organization hoped “these announcements soon track with the actual experience on the ground in hospitals."

In the meantime, she said hospitals were “in conservation mode" and not letting their guard down until supplies are in hand.

Texas coronavirus cases as of Monday.