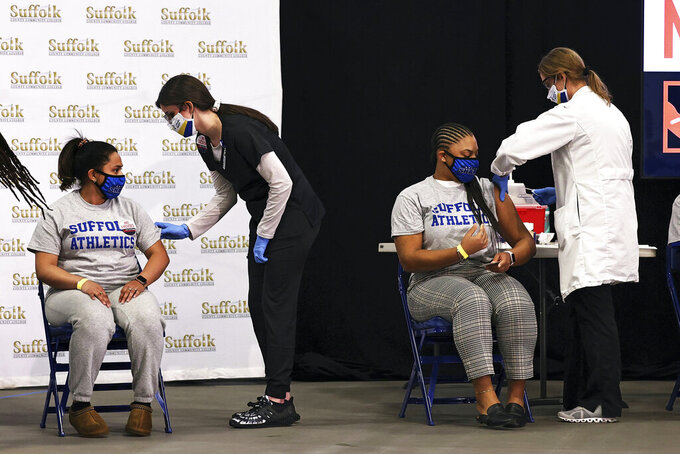 FILE — In this April 12, 2021 file photo, students from Suffolk County Community College prepare to get vaccinated during a news conference on COVID-19 vaccination at the school, in Brentwood, N.Y. Several colleges in the state announced the cancellation of vaccination clinics using the Johnson & Johnson vaccine. (Michael M. Santiago/Pool via AP, File)

After federal health agencies recommended halting the Johnson & Johnson shots so officials can investigate reports of rare but potentially dangerous blood clots, Zucker said all appointments for Johnson & Johnson vaccines on Tuesday at state-run mass vaccination sites would be honored with the Pfizer vaccine.

“I am in constant contact with the federal government, and we will update New Yorkers as more information becomes available," Zucker said in a news release.

The federal guidance came after six reports of the unusual clots, including a death, among the more than 6.8 million Americans given the one-dose Johnson & Johnson vaccination so far. The U.S. Food and Drug Administration said there is no sign of a similar clot concern with the most widely used COVID-19 vaccines in the U.S., from Pfizer and Moderna.

New York City Mayor Bill de Blasio said at a virtual news briefing that the city would follow the federal recommendation and stop administering the Johnson & Johnson vaccine as well.

De Blasio, who received the Johnson & Johnson vaccine himself last month, said the pause in vaccinations was a setback for the city but added, “our effort continues strong and will continue today and every day until we beat this disease.”

City Health Commissioner Dr. Dave Chokshi said city-run sites have administered about 234,000 doses of the Johnson & Johnson vaccine with no reports of the type of blood clot that has raised concerns.

“We continue to monitor for that, of course, in coordination with our federal partners, but we have not seen that thus far," Chokshi said.

On Long Island, Suffolk County health officials also said they would stop dispensing the Johnson & Johnson vaccine for now. About 2,000 residents have gotten that vaccine at sites run by the big suburban county's Health Department, which said in a news release that it hadn't been notified of any of those vaccine recipients having problems.

Other vaccines have made up about 98% of Suffolk County's supply so far, officials said, so they didn't expect the pace of vaccination to slow significantly.

The pause comes as the State University of New York has been rushing to vaccinate tens of thousands of students before the end of the semester next month.

SUNY said last week that 350,000 students were being urged to make appointments on 34 campuses. SUNY said it would use the Johnson & Johnson vaccine because its one-dose protocol would ensure students would be fully vaccinated by the time they left campus.

“We urge all students with appointments for the Johnson & Johnson vaccine to contact their campus or vaccination site because alternatives have already been found in some instances,” he said in a statement.

“We apologize to those who were looking forward to being vaccinated today,” Heidi Macpherson, president of SUNY Brockport, said in a statement. "More information about other potential vaccination opportunities, on or off campus, will be shared when they become available.“

Officials at SUNY Oswego announced that a Johnson & Johnson vaccination clinic scheduled for Tuesday would be canceled and advised students and employees to look into local options for getting the Moderna vaccine.