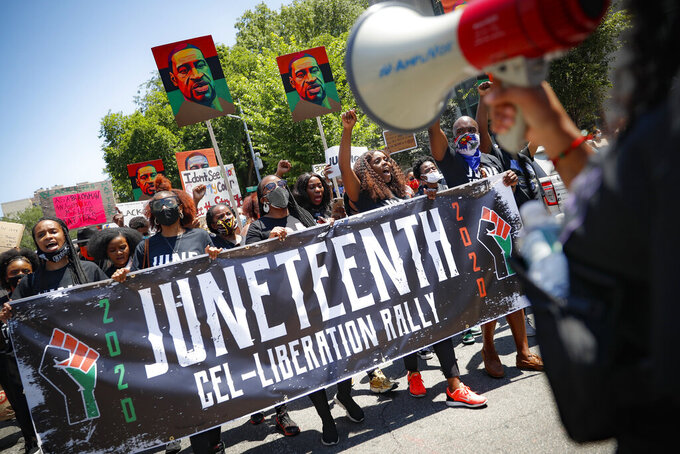 FILE- In this June 19, 2020 file photo, protesters chant as they march after a Juneteenth rally at the Brooklyn Museum, Friday, June 19, 2020, in the Brooklyn borough of New York. On Thursday, July 23, 2020, New York State passed a bill to designate June 19 as Juneteenth to commemorate the emancipation of slaves in the U.S. (AP Photo/John Minchillo, File)

The state Senate and Assembly worked into the evening Thursday on bills addressing calls for a reckoning on the nation's history of slavery and racism, a law shielding nursing homes from lawsuits amid the COVID-19 pandemic, and efforts to make it easier to vote in the Nov. 6 election. Several bills — including a moratorium on facial recognition programs at schools — will eventually head to the desk of Gov. Andrew Cuomo, who then faces a 10-day deadline to act.

The State Senate and Assembly this week passed a bill to designate June 19 as Juneteenth to commemorate the emancipation of slaves in the U.S.

New York joins states including Texas, where Juneteenth has its historical roots and where it became a state holiday in 1980.

“Every day our communities witness a continued fight for justice and equality,” said the bill's sponsor, Sen. Kevin Parker, a Democrat. "Designating Juneteenth a public holiday gives us a chance to recognize our liberties, honor our ancestor’s struggle for emancipation, and send a clear message that we value this significant moment in history.”

President Abraham Lincoln’s Emancipation Proclamation was effective Jan. 1, 1863. But it wasn’t until June 19, 1865, when word of the proclamation was brought by the Union army to enslaved people in Galveston, Texas, making them among the last to learn about their emancipation.

The Legislature also passed a bill setting aside the second Monday in July to observe the New York state Legislature’s passage of the Abolition Act on March 31, 1817, which abolished slavery effective July 4, 1827.

Lawmakers said Abolition Commemoration Day would honor the sacrifices of abolitionists and the end of slavery in New York.

“Slavery was not an institution confined to the south — New York had its own long history with its cruelty and horrors," said Assemblymember J. Gary Pretlow, a Democrat.

Some state agencies will automatically register voters under another bill the Democratic-led Legislature passed.

Senate Deputy Majority Leader Michael Gianaris said the new system will help cut costs and enroll more of about two million eligible voters who aren't on the rolls. The legislation allows voters to opt out of voter registration.

“While national efforts to establish more roadblocks to voting increase, it is critical we make it as easy as possible for all New Yorkers to exercise their right to vote," he said.

New York would limit federal Immigration and Customs Enforcement officers from arresting people on immigration violations at New York courthouses under a bill passed by the State Senate and Assembly this week.

Bill sponsor, Sen. Brad Hoylman, said ICE arrests in or around courthouses in New York have spiked since Trump took office. Supporters say that individuals have avoided contacting law enforcement or following through with court proceedings over fear of being targeted over their or a family member's immigration status.

A bill to ban retail pet shops from selling dogs, cats or rabbits as soon as mid-2021 passed the state Senate Tuesday, though the bill's fate was unclear Thursday.

Supporters including The Humane Society of the United States have noted that most New York pet stores already don’t sell cats, dogs or rabbits. But backers of New York's bill — which would impact about 80 pet retail stores largely in New York City and Long Island — say it would send a message against pet sales.