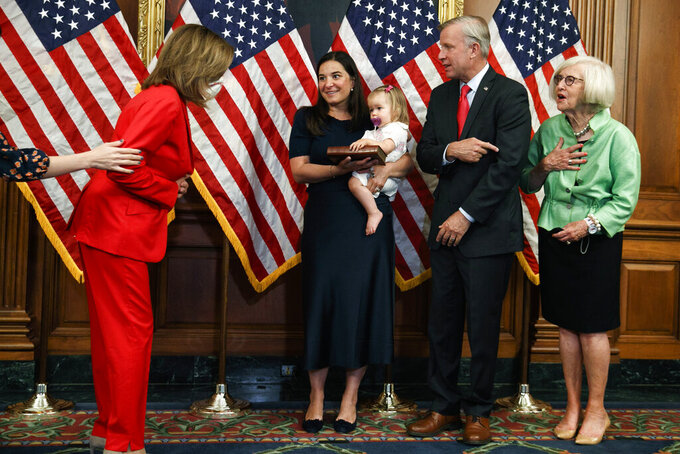 A staffer reaches out to show House Speaker Nancy Pelosi of Calif., left, her place to stand due to coronavirus precautions, as she arrives for a ceremonial swearing-in for Congressman-elect Chris Jacobs, R-N.Y., second from right, Tuesday, July 21, 2020, on Capitol Hill in Washington. With Jacobs are his wife, Martina Jacobs, second from left, daughter Anna, 1, and mother Pamela Jacobs. (AP Photo/Jacquelyn Martin) 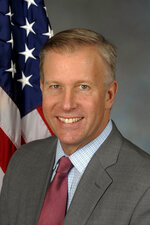 WASHINGTON (AP) — Republican Chris Jacobs of upstate New York became the newest House member on Tuesday, taking the oath of office to fill the unexpired term of a lawmaker who left Congress after pleading guilty to federal insider trading charges.

Jacobs, who has been a state senator, had the support of President Donald Trump as he won a special election last month against Democrat Nate McMurray.

He wore a face mask — unlike some Republicans — as he took the oath on the House floor from Speaker Nancy Pelosi, D-Calif. In brief remarks, Jacobs said he planned to “help our state at a time when they are clearly in need in a fiscal crisis,” an apparent reference to the blows the coronavirus pandemic has dealt to New York and the entire country.

Jacobs and McMurray, an attorney and former local official, will compete again in November's elections for a full two-year term. The district covers rural and suburban areas between Rochester and Buffalo.

Jacobs, 53, will serve the five and one-half months remaining in the term of former GOP Rep. Chris Collins.

Collins, the first sitting member of Congress to back Trump's candidacy in 2016, was in his fourth House term when he resigned last October. The day before, he pleaded guilty to conspiracy to commit securities fraud and making false statements.

He was sentenced in January to 26 months in prison and a $200,000 fine. He is scheduled to report to prison next month.

Democrats control the House 232-198, plus one independent and four vacancies.