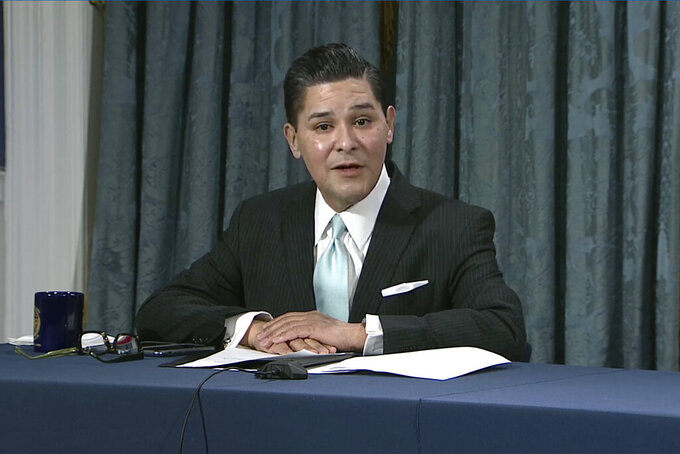 He will be replaced by Bronx Executive Superintendent Meisha Ross Porter, who will become the first Black woman to lead the nation's largest public school district.

Carranza, who has spent three years on the job, briefly choked back tears at a news conference as he announced his decision.

“I know the pandemic has not been easy for you or for any New Yorker," he said. "And make no mistake, I am a New Yorker — well not by birth, but by choice — a New Yorker who has lost 11 family and close childhood friends to this pandemic. And a New Yorker who, quite frankly, needs to take time to grieve.”

He said that he felt the city’s public school system, with around 1 million students, was stable enough to handle a leadership change.

Porter is set to take over March 15, ready to “hit the ground running and lead New York City schools to a full recovery,” she said.

“We’ll do everything to reopen schools, starting with high schools, we’re ready to go,” Porter said.

Tens of thousands of New York City middle school students returned to their school buildings on Thursday for the first time since city schools were closed in November amid a surge in coronavirus infections. Some elementary school students returned to in-person schooling in December, but upper-grade classrooms have remained closed except for those serving some special-needs students.

Parents of a majority of students in the school system opted to have their kids attend only remote classes this year.

“My job will be to remove the barriers to direct resources where they are needed most and communicate clearly around our shared goals and commitments, at every school in every neighborhood in every single part of borough,” Porter said as she prepared to take over a district challenged also by stubborn patterns of racial segregation and student homelessness.

Carranza came to the school system in 2018 with a top priority of addressing racial injustice. He shared that goal with Mayor Bill de Blasio, but the two sometimes disagreed on how to address the issue, debating whether to end gifted and talented programs said to disfavor Black and Hispanic students who compromise two-thirds of students in the district.

“Let me just say, when I came to New York City three years ago, it was because I believed that this mayor believes in equity and believes in tearing down systems that oppress anyone,” said Carranza, who formerly headed public school districts in San Francisco and Houston.

Just last month, de Blasio and Carranza together announced middle and high school admissions changes that represented one of the city’s most significant steps in years on school integration.

“Policy is never made in a perfect four-corner box where everybody automatically says ‘Yes, this is a piece of cake,' and I’m going to love it,” Carranza said. “What I have appreciated about this mayor is that he has allowed all of us at the table to have differing views and to argue those views and to advocate those views and come to a consensus.”

Advocates said an increasingly diverse Department of Education staff under Carranza's oversight has helped move the department toward racial justice.

“From day one, Carranza challenged white supremacy in education and called out the inequity, bias and segregation in New York City schools. Not only did he name the problem, but he took major steps to move the city schools in a more equitable direction,” Zakiyah Ansari of the Alliance for Quality Education said in a joint statement with the director of the NYC Coalition for Educational Justice, Natasha Capers.

“Too often he had to fight behind the scenes to keep the needs of students, staff and their families ahead of politics,” Mulgrew said. "We wish him well. He will be missed.”

School superintendents around the country have been departing in higher numbers than usual this year because of the stress related to the pandemic, said Dan Domenech, executive director of AASA, The School Superintendents Association. Each of the 14,000 school districts in the country has been navigating its own way through the crisis with little direction from state and national governments, he said.

“The pressure they are dealing with on opening schools, the pressure from parents, teachers, and school boards is significant and is taking a toll on them,” he said.

Turnover has held relatively steady in big city districts, where the average tenure of a school superintendent is around 3 1/2 years. But it has been notably higher in suburban and rural communities, where superintendents typically stay closer to six years, Domenech said.