NYT says it can 'ride out' virus as subscriber numbers boom 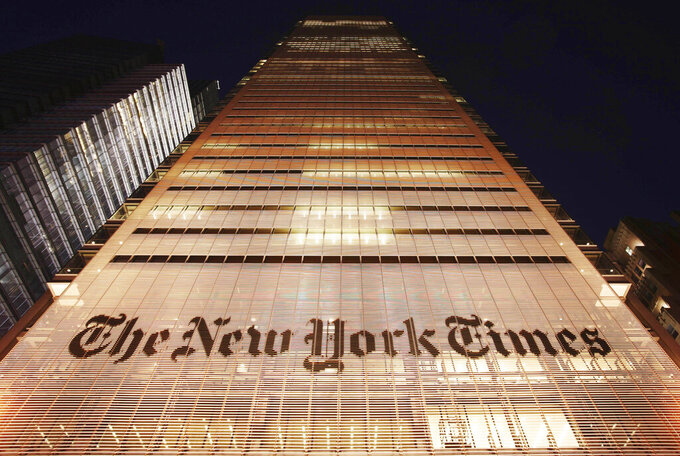 FILE - In this Oct. 21, 2009 file photo, The New York Times building is shown in New York. The New York Times Co. added new digital subscribers at a record rate in the first quarter of 2020, as the coronavirus spread, helping offset shrinking ad revenues. The newspaper publisher says it can ride out the effects of the pandemic because of its shift to relying more on digital reader revenue. (AP Photo/Mark Lennihan)

The newspaper publisher said it was “well positioned to ride out this storm and thrive in a post-pandemic world” because of its shift to relying more on subscriptions from readers than on advertising. While the Times and a few other national publishers like the Wall Street Journal have successfully built up digital subscription models, local news publishers are largely struggling to do so.

Many news organizations are cutting pay, jobs or even shutting down as advertising craters. On a conference call Wednesday morning, Times CEO Mark Thompson said the Times will also have to cut costs and a “comparatively small number” of jobs in the coming months, although he said the company would not cut newsroom positions.

For the Times, advertising sales fell 15.2% in the first quarter, to $106.1 million, despite a surge in traffic to its website that led to record online audience numbers. The company said that in March, more than half of U.S. adults visited its site. Readers viewed 2.5 billion pages, nearly double the normal statistics. More traffic would usually lead to more ad revenue, but advertisers are pulling or halting campaigns. The company expects a huge decline of 50% to 55% in ad revenues in the current quarter.

Shares rose 6.5% to $35.54 in morning trading. New York Times shares have climbed almost 4% since the beginning of the year.

Parts of this story were generated by Automated Insights (http://automatedinsights.com/ap) using data from Zacks Investment Research. Access a Zacks stock report on NYT at https://www.zacks.com/ap/NYT