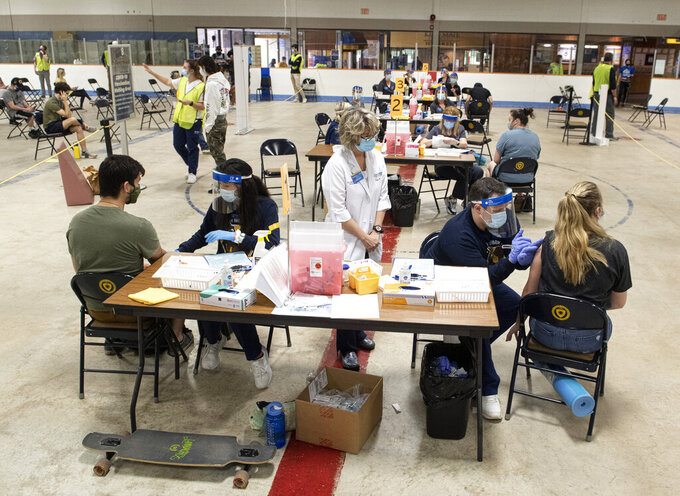 The state was mainly directing the single-dose J&J vaccine to mass vaccination clinics and to its 63 public and private four-year colleges and universities, most of which have already completed their student vaccinations, Republican Gov. Mike DeWine said during a briefing Tuesday.

But Ohio still has a ways to go and the pause dealt a major setback to the state's plan to vaccinate students before they head out for summer break in a few weeks.

“This was not a good way to start the day,” DeWine said. “But look, we still have the Pfizer, we have the Moderna and we need to get it out and we want people to feel confident about it.”

“It is what it is and it will get sorted out. We'll move on,” he added.

Earlier Tuesday, the Centers for Disease Control and Prevention and the Food and Drug Administration had recommended a pause while the agencies investigate blood clots in six women in the days after vaccination, in combination with reduced platelet counts that would make the usual treatment for the clots dangerous.

Johnson & Johnson said no clear causal link has been established between its vaccine and the clots.

In Ohio, more than 260,000 doses of the J&J vaccine have been administered, making it just around 6% of the number of vaccines the state has disseminated through providers and mass vaccination sites.

As of Tuesday, more than 4 million Ohioans, close to 36% of the population, had received at least one dose of a coronavirus vaccine.

Millions of doses of the J&J vaccine have been given around the country, the vast majority with no or mild side effects. The majority of vaccines administered in the U.S. have been from Pfizer and Moderna, which aren’t affected by the pause.

During DeWine's briefing, a handful of state medical officials attempted to appease public concern over the vaccine news by highlighting the small number of adverse cases and the transparency around the issue.

“The bottom line is that these cases appear to be extremely rare,” Dr. Bruce Vanderhoff, the state's chief medical officer, said. “And the fact that the CDC and the FDA have raised concerns and pushed the pause button on the basis of these six cases should give Ohioans great confidence in not only the priority that is being placed on vaccine safety but also the reliability and transparency of the CDC and FDA's safety monitoring systems.”

Officials at Cleveland State, Bowling Green State, Youngstown State and Miami University announced they were pausing their student vaccination center as a precaution, while Kent State postponed its J&J clinics until further notice. Other state universities and colleges as well as Cincinnati-based Kroger Co., the nation’s largest traditional supermarket chain, will switch to providing either Pfizer or Moderna doses.

In Toledo, where health providers are racing to vaccinate more people as cases surge in neighboring Michigan, the J&J pause will hinder efforts to get vaccines out faster, said Eric Zgodzinski, health commissioner for Lucas County.

Providers who began using the J&J vaccine last week in a coordinated campaign to reach those who are homebound have put those efforts on hold and now must figure out how to go forward, he said.

“It throws a monkey wrench into our planning,” he said.

A mass clinic quickly pivoted Tuesday from J&J to doses of Moderna without turning anyone away.

“We do have vaccine available for everybody who wants it this week and in the coming weeks,” Zgodzinski said.

This story has been corrected to show that around 6% of vaccinations administered in Ohio have been the Johnson & Johnson shot, not 0.06%.

Associated Press writers Dan Sewell in Cincinnati and John Seewer in Toledo contributed to this report.