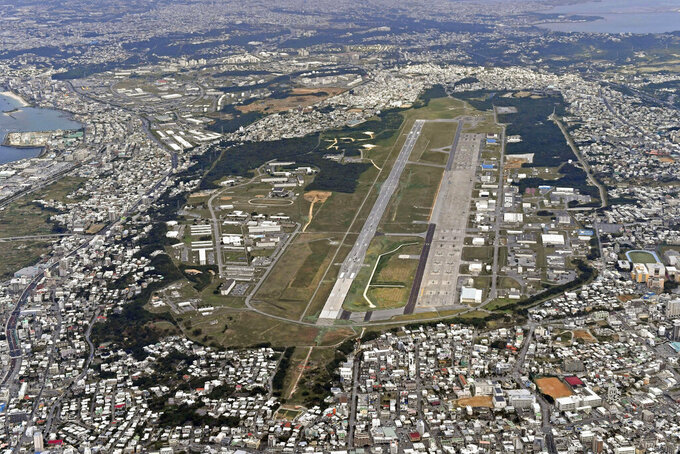 FILE - This Jan. 27, 2018, aerial file photo shows U.S. Marine Air Station Futenma in Ginowan, Okinawa, southern Japan. Okinawan officials said Saturday, July 11, 2020 that dozens of U.S. Marines have been confirmed to have infected with the coronavirus at two bases, Futenma and Camp Hansen, on the southern Japanese island in what is feared to be a massive outbreak, and demanded adequate explanation from the U.S. military officials. (Kyodo News via AP, File)

TOKYO (AP) — The governor of Japan's Okinawa island demanded a top U.S. military commander take tougher prevention measures and more transparency hours after officials were told that more than 60 Marines at two bases have been infected with the coronavirus over the past few days.

Okinawan officials on Sunday reported a total of 61 cases — 38 of them at Marine Corps Air Station Futenma, which is at the center of a relocation dispute, and another 23 at Camp Hansen — since July 7. They said that U.S. military officials told them the two bases have since been put in lockdown.

The disclosure of the exact figures came only after Okinawa's repeated requests to the U.S. military.

“Okinawans are shocked by what we were told (by the U.S. military),” Tamaki told a news conference Saturday. “It is extremely regrettable that the infections are rapidly spreading among U.S. personnel when we Okinawans are doing our utmost to contain the infections.”

“We now have strong doubts that the U.S. military has taken adequate disease prevention measures,” he added.

Tamaki said he wants more talks with the U.S. military. Okinawan officials also asked the Japanese government to pressure the U.S. side to provide details including the number of cases, seal off Futenma and Camp Hansen, and step up preventive measures.

Adding to their concern is quarantining of an unidentified number of American service members arriving from the mainland U.S. for ongoing staff rotations at an off-base hotel due to shortage of space on base, officials said.

The Marines said in a statement Friday that the troops were taking additional protective measures to limit the spread of the coronavirus and were restricting off-base activities. The statement said measures are “to protect our forces, our families, and the local community,” without providing details on the infections.

Okinawa is home to more than half of about 50,000 American troops based in Japan under a bilateral security pact, and the residents are sensitive to U.S. base-related problems. Many Okinawans have long complained about pollution, noise and crime.

Okinawans also oppose a planned relocation of Futenma Air Base from the current site in a densely populated area in the south to a less populated area on the east coast.

Okinawa has had about 150 cases of the coronavirus. In all, Japan has had about 21,000 cases and 1,000 deaths, with Tokyo reporting more than 200 new cases for a third straight day Saturday.