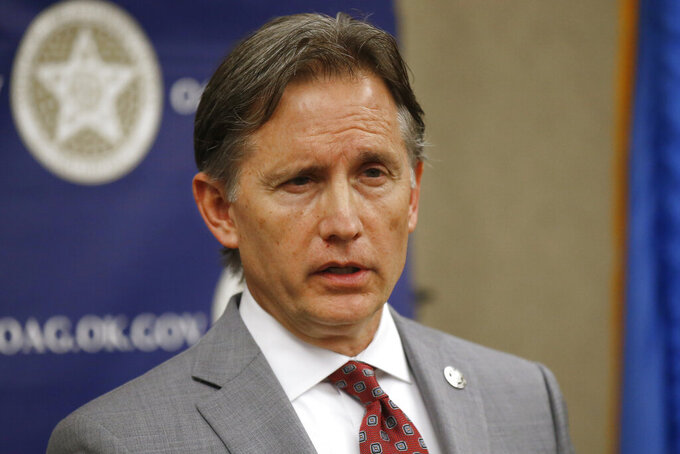 FILE - In this Aug. 3, 2020, file photo, Oklahoma Attorney Gen. Mike Hunter speaks during a news conference in Oklahoma City. Hunter has secured a $2.6 million refund for the purchase of a malaria drug once touted by President Donald Trump as an effective treatment for COVID-19. Hunter announced the agreement on Friday, May 7, 2021, with California-based FFF Enterprises. (AP Photo/Sue Ogrocki, File)

OKLAHOMA CITY (AP) — Oklahoma has secured a $2.6 million refund for the purchase of a malaria drug once touted by President Donald Trump as an effective treatment for COVID-19, a state official said Friday.

Attorney General Mike Hunter said the state the state will receive the refund under an agreement with FFF Enterprises, a California-based medical supply wholesaler.

“I commend the leadership at FFF Enterprises who worked with us to return the state’s supply of hydroxychloroquine while giving the state a refund,” Hunter said in a statement. “They recognized we were in competition with every other state in the nation to get whatever we could to protect Oklahomans. When it was determined the drug wasn’t effective in combatting the virus, they did the right thing by refunding our money."

Oklahoma alleged that the price paid for the drug may have been excessive under the state's Emergency Price Stabilization Act, which prohibits an increase of more than 10% for the price of goods and services after a declared emergency. Under the refund agreement, FFF Enterprises denies any accusations related to the pricing and delivery of the drug.

The Oklahoma State Department of Health purchased 1.2 million hydroxychloroquine pills in April 2020, at the start of the coronavirus outbreak.

Republican Gov. Kevin Stitt defended the purchase last year, saying the drug was showing some promise as a treatment in early March and that he didn’t want to miss an opportunity to acquire it.

“I was being proactive to try and protect Oklahomans,” Stitt said at the time.

Former President Trump repeatedly touted hydroxychloroquine during his regular coronavirus briefings last year, but the U.S. Food and Drug Administration as early as April 2020 warned doctors not to prescribe the drug for treating the coronavirus outside of hospitals or research settings because of reports of serious side effects, including dangerous irregular heart rhythms and even death.

The drug has since been shown to have little or no effect on severe cases of COVID-19. A former state health official chalked up Oklahoma’s purchase to something that happens in “the fog of war.”

While governments in at least 20 other states obtained more than 30 million doses of the drug through donations from the federal reserve or private companies, Oklahoma and Utah bought them from private pharmaceutical companies. Utah later managed to secure a refund on the $800,000 no-bid contract it signed with a local pharmacy company that had been promoting the drugs.