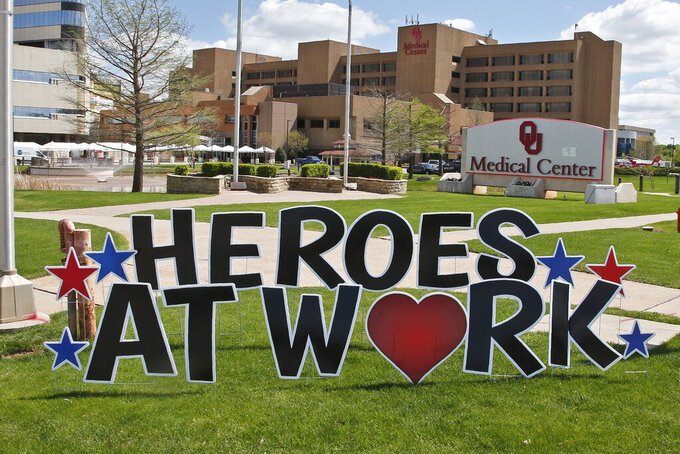 FILE - In this March 31, 2020, file photo, a sign applauding health care workers is displayed outside the University of Oklahoma Medical Center in Oklahoma City. The head of coronavirus response at the university medical center says an increase in the number of younger Oklahomans dying as a result of the illness caused by the virus has become a worry. Dr. Dale Bratzler said Friday, July 24, 2020, that even though most deaths remain in the 65 and older age group, the increase in deaths among those 36-49 years old shows it can kill younger people as well. (AP Photo/Sue Ogrocki, File)

OKLAHOMA CITY (AP) — The head of the coronavirus team at the University of Oklahoma Medical Center said Wednesday that he believes the coronavirus is being spread by a younger age group and likely leading to an increase in virus-related deaths of those 65 and older.

“As we've seen more and more cases in the 18-35 year-old age group, we've also seen the number of patients 65 and older who have also tested positive,” according to Dr. Dale Bratzler. “When you look at the deaths in Oklahoma, the vast majority are in patients that are 65 years of age and older and I suspect that many of those people in that age group who get infected have been exposed by younger people that are more social and mobile out in the community setting.”

Bratzler said the state has averaged 937 positive test results per day during the past seven days and despite the best efforts of health officials to trace those in contact with people who test positive, he is not sure that is enough to slow the spread of the disease that has infected more than 6,500 people in the state during the past week.

“Although we have more contact tracers now, I'm not sure they can keep up entirely with the volume of work that we're asking them to do,” Bratzler said. “I don't think that we can do enough yet to actually limit, contain, the spread of this virus with a thousand people a day testing positive.”

The federal Centers for Disease Control recommends that anyone exposed to COVID-19 quarantine themselves for 14 days.

The Oklahoma State Department of Health reports that most, nearly 36%, of the confirmed cases of the coronavirus are in the 18-35 age group, compared to just under 14% in the 65 and older group, but nearly 79% of the deaths, including nine of the 14 new deaths reported Wednesdasy due to COVID-19, the disease caused by the illness, were those 65 or older.

The department reported 34,623 confirmed cases of the virus, an increase of 848 reported cases Tuesday, and 523 deaths, up from 509 the day before.

The true number of cases in Oklahoma is likely higher because many people have not been tested, and studies suggest people can be infected and not feel sick.

The department also reported 663 people hospitalized Wednesday either with the illness or under investigation for infection, an increase of 67 hospitalizations from Tuesday.

A total of 27,386 people have recovered from the illness, according to the department.

For most people, the coronavirus causes mild or moderate symptoms that clear up within weeks. But for others, especially older adults and people with existing health problems, the highly contagious virus can cause severe symptoms and be fatal.