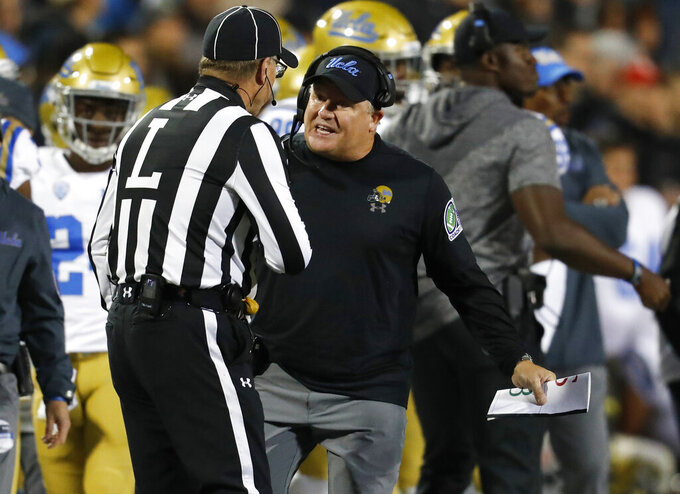 FILE - In this Sept. 28, 2018, file photo, UCLA coach Chip Kelly argues a call with official Tim Messuri during the second half of the team's NCAA college football game against Colorado in Boulder, Colo. UCLA plays at Colorado this week. (AP Photo/David Zalubowski, File)

In 2003, he began his UCLA head coaching career against Colorado at Folsom Field.

Only this time, he wouldn't mind being on the right side of the score given the Bruins lost that September day on a late drive.

“Seventeen years later, it’s flipped over and (coaching) the other way," Dorrell said.

Dorrell has deep ties with the Bruins. He was a standout receiver for UCLA from 1982-86 and took over the program in ’03. He guided the team to a 35-27 mark before being let go.

That was so many coaching stops ago. There's nothing but excitement emanating from Dorrell for his delayed debut in an abbreviated season due to the COVID-19 pandemic.

“I hardly mention anything about me and my experiences at UCLA,” said Dorrell, who was hired in February when Mel Tucker left for Michigan State after just one season. “It’s really more about our preparation for the first game. They know the circumstances. The approach is business as usual."

His anticipated emotions running into Folsom on Saturday?

“Pretty locked in,” Dorrell said. “Pretty focused on what I need to get done.”

The last time the Buffaloes played UCLA was a year ago at the Rose Bowl, when Bruins quarterback Dorian Thompson-Robinson threw for 226 yards and two TDs in a 31-14 win.

Thompson-Robinson leads a Bruins team picked during the preseason media poll to finish fourth in the Pac-12 South, just ahead of Colorado. The Bruins are an even more confident offense in Year 3 under coach Chip Kelly.

“Just knowing they know where they’re going to be and knowing where I’m going to put the ball at the right time, having that connect to me is where confidence comes from,” Thompson-Robinson said.

The Bruins are 11-4 all-time against Colorado, including 4-3 in Boulder. One of those losses was in Dorrell’s UCLA head coaching debut on Sept. 6, 2003, when then-Colorado quarterback Joel Klatt led a late drive in a 16-14 win.

On the other side now, Dorrell is looking to become Colorado’s third straight first-year head coach to win his inaugural game, joining Tucker and Mike MacIntyre.

This could work in his favor: UCLA doesn't know much about Dorrell and his schemes.

“You've just got to be prepared to make in-game adjustments for it," Kelly said.

The 56-year-old Dorrell will be leaning on a quarterback whom he re-recruited back to campus. Sam Noyer was converted to safety last season under Tucker and was all set to transfer elsewhere before being persuaded to return by the new coaching staff. Noyer beat out Tyler Lytle in fall camp.

“I know a lot of people don’t have high expectations for us, which is OK," Dorrell said. “But they’re eager to show they can compete and play well in this conference regardless of who we’re playing.”

To cut down on his turnovers, Thompson-Robinson worked on ball security with the running backs. He had seven fumbles lost last season to go with 12 interceptions.

“I don’t think I’ve fumbled or thrown a pick or anything this whole camp,” Thompson-Robinson said.

Colorado running back Alex Fontenot was recently injured and won’t play. He had 874 yards and five TDS in 2019.

Filling in will be redshirt sophomore Jarek Broussard, who suffered a season-ending knee injury in September 2019. He's put that knee injury out of his mind.

“If you play scared, you might end up getting hurt," Broussard said. “Whenever I step on the field, it's like I'm normal and never had no knee injury. Play fast.”

Colorado has captured four straight season openers — all against rival Colorado State in Denver. The Buffaloes are opening against someone other than the Rams for only the fifth time in the last 24 seasons.

This isn’t the latest start in Colorado football history. The team began on Nov. 16, 1918, due to the influenza pandemic. Colorado lost at home 9-0 to Colorado State Teachers College, which is now Northern Colorado.

On the UCLA side, this marks the latest start to a football season. The previous latest was Oct. 13, 1923.

Kelly is 7-17 at UCLA, but 7-11 in conference. The Bruins posted quality wins last year against Washington State and Arizona State, which were both ranked at the time.