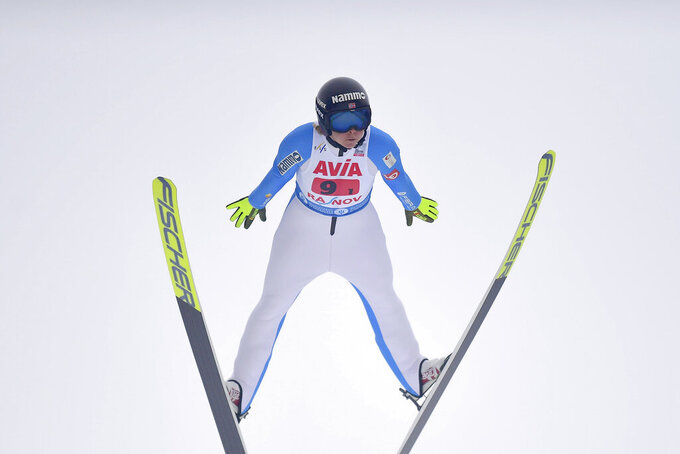 FILE - Norway's Maren Lundby competes in the mixed team ski jumping World Cup event in Rasnov, Romania, on Feb. 20, 2021. Lundby has emerged as an advocate for change in a sport that has historically had athletes develop eating disorders in a quest to be as light as possible to fly farther. (AP Photo/Raed Krishan, File)

Maren Lundby was the world's best female ski jumper for three years, starting in 2018 when she won Olympic gold in South Korea.

At the Beijing Games, the Norwegian had a chance to become the first two-time Olympic champion in her sport. Instead, she decided to skip the World Cup season and a trip to China for the Olympics in order to make her physical and mental health a priority.

“I decided to not compete because I gained some weight," Lundby said Tuesday in an interview with The Associated Press. “I feel like I can’t compete on the level I want to.”

Over the last few months, Lundby has emerged as an advocate for change in a sport that historically has had athletes develop eating disorders as teenagers, all in a quest to be as light as possible to squeeze a few more meters out of their flights through the air.

USA Nordic executive director Billy Demong, a five-time Olympian in Nordic combined, said ski jumping is “one of the most eating-disorder plagued sports” because of the desire to keep pounds off.

“Fat don’t fly, things like that. That’s not something I’m ever going to let a coach say, but the athletes talk to each other and they see it on TV,” Demong said earlier this season during training in Lake Placid, New York. “Some guys took it too far, back in the day, in my era from 2000 to 2005 is when it was really bad.

"We're talking 6-foot guys that were like 105 to 110 pounds. Wildly light. Some guys could do it and somebody else would starve themselves the wrong way and they would end up in the hospital."

The 27-year-old Lundby is the latest athlete to spark conversation about the intensity of high-level competition — and what's not working anymore for athletes concerned about their health, physical and otherwise.

U.S. star gymnast Simone Biles withdrew from some events at the Tokyo Olympics for the sake of her well-being following a similar move at the French Open by Naomi Osaka. U.S. skiing stars Mikaela Shiffrin and Jessie Diggins have talked about personal struggles; the latter also wrote a book about struggles female athletes face while dealing with unrealistic pressures to have a certain body type.

“Simone Biles, Mikaela Shiffrin, Jessie Diggins — the ones that have shared their stories with mental health — have been great," said U.S. ski jumper Casey Larson, who will compete in his second Olympics. “It definitely helped us raise the awareness for the athletes that are struggling out there. It’s a definitely a great story.

“But at the end of the day, ski jumpers got to be skinny if you want to go far,” Larson added.

The International Ski Federation has attempted to prod athletes to make wise choices when managing their weight.

If jumpers have a body mass index of 21 or more, they can have skis as long as 145% of their height. The more ski surface they have, the farther they fly. But FIS requires jumpers to use shorter skis if their BMI falls below 21, which is considered a relatively healthy number for men and women.

Chika Yoshida, the FIS race director for women’s ski jumping, said those rule changes that were made nearly 20 years ago were necessary and have been effective.

“We had a big problem because athletes were having problems with their eating behavior,” Yoshida said Thursday in a telephone interview. “At the moment, we are OK and there is no big issue. But after the season, we will also discuss this issue again.

“But aerodynamics is one of the biggest factors in our sport and the athletes must be fit, and they're like airplanes. If you're lighter, you have an advantage.”

One of the sport’s greats, Matti Nykanen of Finland, was listed at 5-foot-8 and 120 pounds for the 2010 Olympics; his BMI would be an “underweight” 18.5 with those numbers. Four years later, Sara Takanashi of Japan was all of 5 feet tall and barely 100 pounds but a “healthy” BMI of 19.

Lundby said she believes it is important to speak up about the issue of weight and added that it's "really good to tell all the young athletes to not make stupid decisions and to suffer.”

“The changes made it easier for everybody to have the the right weight, but for some, it’s still hard and quite challenging for your health in the long term," Lundby said. "I wish it was possible to jump at higher weights, but at the moment that’s not how it is. I wish there could be some changes in the rules that would makes it easier for every athlete to be a ski jumper."

Ski jumpers tend to be tall and slender, taking advantage of their height to have longer skis and lighter weight to help in the battle against gravity. They're not the only athletes that face pressure to watch their weight, joining gymnasts, wrestlers and jockeys to name just a few.

“It is true fat doesn’t usually end up flying very far,” Larson said. “But for the most part, USA Nordic has been great in the sense of getting us the help we need."

USA Nordic, which develops American ski jumpers and Nordic combined athletes, is trying to stop eating disorders before they start. The organization has partnered with NYU Langone Health in part to educate jumpers on the dangers of cutting weight.

“There will be consequences to not fueling your body how it should be fueled, maybe not right away, but over time,” said Nicole Lund, a NYU Langone Health clinical nutritionist who works with USA Nordic athletes. “They’re young and they may not understand that quite yet, but that is something to kind of keep in mind.”

Even though Lundby is taking a break from competing, she is staying connected to the sport. She's training in the hopes of making a comeback next winter while traveling around Europe as a ski jumping TV analyst.

“I really want to be there,” she said of the Games. “I’m an athlete and I want to win a gold medal. To not be there, it’s hard so I am looking forward to the closing ceremony.”

Lundby will have to wait another four years to have a chance to compete for Olympic gold, but some say it's time to celebrate the courage she has shown by sharing her story.

“She's a person that a lot of women, a lot of athletes, have looked up to," Demong said. “I respect her a lot for having that kind of foresight six months out from the Olympics that she was going to win, potentially."