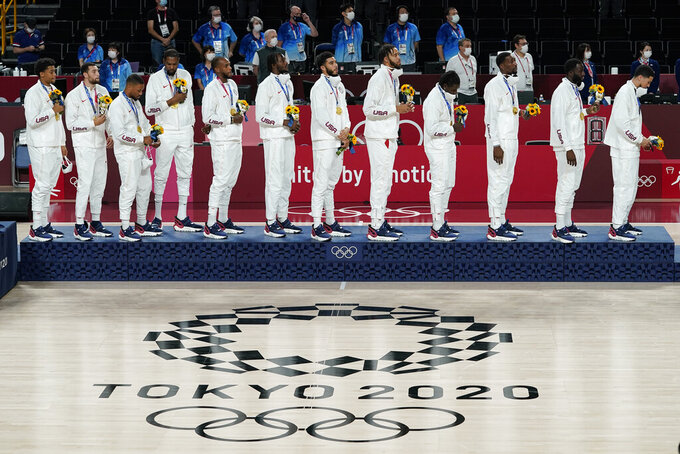 The U.S. men's basketball team stands on the podium during the national anthem after receiving their gold medals at the 2020 Summer Olympics, Saturday, Aug. 7, 2021, in Tokyo, Japan. (AP Photo/Charlie Neibergall)

TOKYO (AP) — The Tokyo Games were the Olympics staged a year later than planned because of a pandemic, where the athletes and organizers said it was a privilege just to play and uplift the world through sport.

If ever there was a Games where sportsmanship would rise above the national rivalries in the gym, on the track and in the pool, Tokyo was it.

Yet the medal count still counts. A lot.

The countries that typically dominate the numbers game have done so again when tallying gold, silver and bronze. But there have been some big surprises along the way, some of them delivered by smaller nations, older athletes and teenage newcomers. Sunday is the last day of competition in Tokyo.

As they did in Rio de Janeiro in 2016, the United States and China rank first and second in total medals. After Saturday, the U.S. led the total medal count with 108, including 36 gold.

China wanted a big medal count ahead of hosting the 2022 Beijing Winter Games in February. China had 87 total medals after Saturday, 38 of them gold, bolstered by strong results in diving, shooting, weightlifting and gymnastics.

The Russian flag was kept under wraps, but Russian athletes were climbing podiums everywhere.

Russian athletes are competing as ROC, for Russian Olympic Committee, in the latest round of sanctions from the years-long scandal of doping and the coverup. The ban on the national flag, anthem and team name applies also to the Beijing Winter Games.

Russia has surpassed the 63 medals won in 2016, ranks third overall and has 20 gold medals.

San Marino, the microstate of fewer than 40,000 people in north central Italy, sent five athletes to Tokyo and won three medals in shooting and wrestling. It had never won anything since its first Olympic Games in 1960.

Flora Duffy won the women’s triathlon and the first gold medal for Bermuda, an Atlantic island territory of fewer than 65,000 people. Bermuda's Olympic history dates to 1936.

And Man Asaad of Syria won a bronze medal in weightlifting, his country’s first medal since its civil war began a decade ago.

One of the biggest countries in the world — India, with a population of more than 1 billion — finally won its first gold medal in track and field when Neeraj Chopra won the men’s javelin.

The U.S. bolstered its medal count on the typical strength of its swim teams, women's track, wrestling and gymnastics. And it earned some new medals in new events. Nevin Harrison of Seattle won the first women's canoe sprint 200 meters at age 19.

But some normally reliable sports didn't measure up. The American men's track team earned just two gold medals: Ryan Crouser's shot put and the 4x400 relay in the final sprint race of the Games. American rowers went home without a medal for the first time since 1908, not counting the 1980 Moscow Games boycott.

Japanese athletes competed mostly in front of empty Tokyo arenas that should have been cheering them on. They still ranked fifth in total medals as of Saturday night, and the 27 gold medals ranked third behind the U.S. and China. Japanese teenagers dominated the gnarly new skateboarding events with five medals.

No nation celebrated more joyfully than the Italians on the track of Olympic Stadium. After winning no track and field medals in 2016, the Italians won five — all gold. None was more stunning than Marcell Jacobs winning the men’s 100 meters.

Britain considers rowing an integral part of its Olympic identity and the races at the Sea Forest Waterway were a nautical disaster. Britain won just two rowing medals, neither of them gold, and its fabled men's sweep four nearly crashed with the Italy boat and finished fourth.

Germany's Ronald Rauhe won gold in men's kayak at 39 as he medaled for the fifth consecutive Olympics.