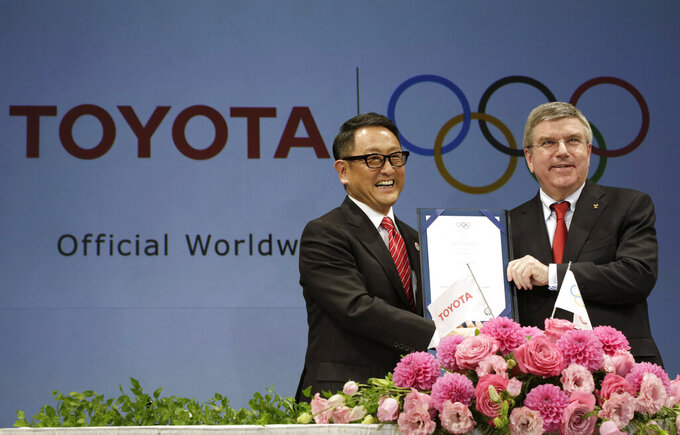 FILE - In this March 13, 2015 file photo, Toyota President and CEO Akio Toyoda, left, and IOC President Thomas Bach pose with a signed document during a press conference in Tokyo as Toyota signed on as a worldwide Olympic sponsor in a landmark deal, becoming the first car company to join the IOC's top-tier marketing program. Toyota won't be airing any Olympic-themed advertisements on Japanese TV during the Tokyo Games despite being one of the IOC's top corporate sponsors. The unusual decision by the country's top automaker underlines how polarizing the Games have become in Japan as COVID-19 infections rise ahead of the July 23, 2021, opening ceremony.(AP Photo/Eugene Hoshiko, File)

TOKYO (AP) — Toyota won’t be airing any Olympic-themed advertisements on Japanese television during the Tokyo Games despite being one of the IOC’s top corporate sponsors.

The extraordinary decision by the country’s top automaker underlines how polarizing the Games have become in Japan as COVID-19 infections rise ahead of Friday’s opening ceremony.

“There are many issues with these Games that are proving difficult to be understood,” Toyota Chief Communications Officer Jun Nagata told reporters Monday.

Chief Executive Akio Toyoda, the company founder’s grandson, will be skipping the opening ceremony. That’s despite about 200 athletes taking part in the Olympics and Paralympics who are affiliated with Toyota, including swimmer Takeshi Kawamoto and softball player Miu Goto.

Nagata said the company will continue to support its athletes.

Being a corporate sponsor for the Olympics is usually all about using the games as a platform to enhance the brand. But being linked with a pandemic-era Games may be viewed by some as a potential marketing problem.

Masa Takaya, a Tokyo 2020 spokesperson, said sponsors each make its own decisions on their messages.

“There is a mixed public sentiment towards the Games," Takaya said.

"I need to emphasize that those partners and companies have been very supportive to Tokyo 2020. They are passionate about making these Games happen.”

The company has no plans to adjust its Olympic marketing plans in the U.S.

“The media plan for Toyota’s Olympic and Paralympic global ad campaign is managed by individual countries and regions. In Japan, the local Toyota office previously decided not to air the campaign out of sensitivity to the COVID-19 situation in that country,” Toyota Motor North America said in a statement. “In the U.S., the campaign has already been shown nationally and will continue to be shown as planned with our media partners during the Olympic and Paralympic Games Tokyo 2020.”

Toyota Motor Corp. signed on as a worldwide Olympic sponsor in 2015, in an 8-year deal reportedly worth nearly $1 billion, becoming the first car company to join the IOC’s top-tier marketing program.

The sponsorship, which started globally in 2017, runs through the 2024 Olympics, covering three consecutive Olympics in Asia, including the Tokyo Games.

The Tokyo Olympics, already delayed by a year, are going ahead despite the Japanese capital being under a state of emergency.

It's already virtually a made-for-TV Olympics with most events, including the opening ceremony, going ahead without fans in the venues. Some dignitaries, such as IOC President Thomas Bach and Emperor Naruhito, are likely to attend.

Toyota is one of the most trusted brands in Japan. The maker of the Prius hybrid and Lexus luxury models prides itself on its quality controls, with its “just in time” super-efficient production methods praised and emulated around the world.

Public opinion surveys reflect widespread concern among Japanese people about having tens of thousands of Olympic participants enter the country during a pandemic. Some already have tested positive for COVID.

Motoyuki Niitsuma, a manufacturing plant worker who was banging on a bucket in a recent Tokyo protest against the Olympics, said he didn’t like the idea of cheering for the national team, and the pandemic has made that message clear.

“The time to compete is over. Now is the time to cooperate,” he said. “We should never have gotten the Games.”