Olympic work not over for top US beach team Ross, Klineman 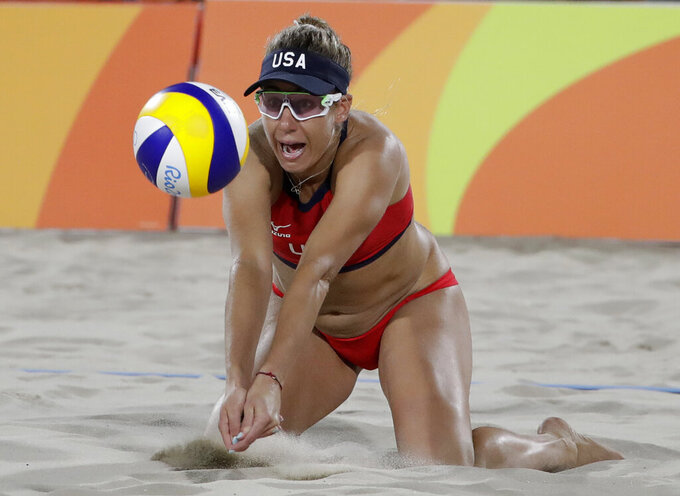 FILE - In this Wednesday, Aug. 17, 2016 file photo, The United States' April Ross passes a ball while playing against Brazil during the women's beach volleyball bronze medal match of the 2016 Summer Olympics in Rio de Janeiro, Brazil. Two-time Olympic beach volleyball medalist April Ross has a rare opportunity to relax with 100 days to go before the Tokyo Games. That doesn’t mean that she will. Ross and partner Alix Klineman are the No. 1 team in the Olympic qualification rankings and the only Americans who have already clinched one of four likely spots for U.S. beach teams in the pandemic-delayed 2020 Games. (AP Photo/Marcio Jose Sanchez, File)

Two-time Olympic beach volleyball medalist April Ross has a rare opportunity to relax with 100 days to go before the Tokyo Games.

That doesn’t mean she will.

Ross and partner Alix Klineman are the No. 1 team in the Olympic qualification rankings and the only Americans who have already clinched one of four likely spots for U.S. beach teams in the pandemic-delayed 2020 Games. While other twosomes are still fighting for spots in Tokyo — including Ross’ partner in Rio, three-time gold medalist Kerri Walsh — Ross and Klineman can work on other things without worrying about their spot in the standings.

But work they will.

“We have to hold onto it for a couple of months. We feel like we have a lot of work to do," Ross said in a conference call on Thursday. “It’s just a blessing to be qualified already."

Ross, 38, won a silver medal at the 2012 Games in London, losing in the championship to Walsh and fellow triple-champion Misty May Treanor. Four years later, Ross teamed up with Walsh to earn bronze in Rio.

Now Ross is headed back to the Summer Games with her third partner in as many tries. Klineman, 31, only moved from the indoor game to the sand in 2017, winning rookie of the year honors on the AVP domestic beach tour before teaming up with Ross the next year to make a run at Tokyo.

Having only played the outdoor sport for a few seasons, Klineman thinks the pandemic delay could pay off with an extra year of experience and bonding with Ross. Kleinman has also fought shoulder problems, and used the time to get healthy.

“Alix is pretty new to the beach, relatively speaking," Ross said. “She was given more time to work on her game.”

Most beach volleyball teams qualify for the Olympics by earning points on the world tour that was shut down for the past year because of the COVID-19 pandemic. A quota limits each country to a maximum of two men’s teams and two women’s.

Heading into a three-tournament mini-bubble in Cancun, Mexico, Ross and Klineman are too far ahead of either the other U.S. teams to be knocked out. Walsh and her new partner, Brooke Sweat, are fifth in the world rankings overall but 3,000 points behind the leaders; Sarah Sponcil and Kelly Claes, and Kelley Kolinske and Emily Stockman are also mathematically in the hunt.

Ross and Klineman were second in the rankings before the COVID-19 shutdown, then they won the first event back last month in Doha, Qatar, to move to No. 1 overall. Although their Tokyo berth is secure, the top ranking would earn them a No. 1 seed in the Olympic tournament, which could mean an easier path to the medal round.

“I know we are in a great place going into Tokyo, but I still feel like there’s a lot to learn,” Klineman said.

Still that's less important to them than remaining healthy and peaking at the right time.

“We have the ability to rest when we want to rest, and make sure that we are physically strong and ready,” Ross said. “Health is a priority, for sure. And there are some other things we want to integrate into our game that we’ve been working on that we haven’t been able to push because we’ve been going for that spot."