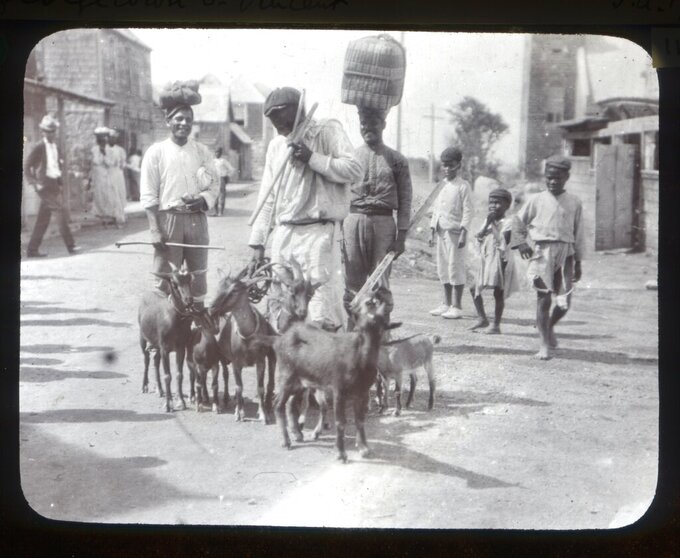 In this 1902 photo provided by York Museums Trust, residents stand alongside a herd of goats in Georgetown, St. Vincent, in the aftermath of explosive eruptions of La Soufrière volcano. In 1902, the warnings of the fish sellers who experienced the volcano up close , were at first dismissed. (Tempest Anderson/York Museums Trust via AP) 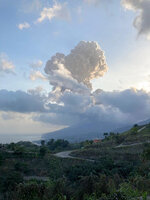 MEXICO CITY (AP) — A group of nervous fish sellers got very close to La Soufrière, the volcano on the Caribbean island of St. Vincent, on the morning of May 7, 1902.

“The top of the mountain was covered in mist, and the foremost of them followed the path up to the base of the summit cone," according to a written account of their experience. “Some went up to quite near the lip of the crater, or possibly even to the actual edge. What they saw there was enough to dismay the stoutest hearts.″

The volcano was about to erupt explosively, devastating swathes of the island. Last week, La Soufrière once again started spewing hot torrents of gas, ash and rock, forcing thousands to evacuate to government-run shelters and private homes.

Things look bleak, even if there are no reported casualties. Crops, fishing and other livelihoods are in peril. The pandemic was already battering the economy, including tourism. Still, regional aid is arriving, the United Nations plans to help, and the 1902 catastrophe is a reminder that St. Vincent recovered from massive eruptions in the past.

Recovery this time could take years, requiring sustained support from around the Caribbean and beyond, said Jenni Barclay, a volcanology professor at the University of East Anglia in Britain who co-authored a study on the impact, relief and response of the 1902-3 eruptions.

St. Vincent is the biggest of the islands forming St. Vincent and the Grenadines, which gained independence from Britain in 1979 and has a population of about 110,000. In 1902, the warnings of the fish sellers who experienced the volcano up close — the thick steam, the scorched vegetation, the sulfurous smell, the constant shaking — were at first dismissed.

″They were received with incredulity, and when they came to Georgetown they were scoffed at as fools and cowards,″ according to an account of the disaster commissioned by the Royal Society of London and published in 1903. The authors were Tempest Anderson, an ophthalmologist deeply interested in volcanoes, and geologist John Flett.

The names of the fish sellers are not included in the report about what happened on St. Vincent, where a white minority dominated a population that included the descendants of Indigenous inhabitants and enslaved Africans.

Clouds and a poor line of sight to the volcano top from the sugar cane plantations and places like Georgetown on the eastern side of St. Vincent contributed to uncertainty about what was happening. To the west, people had no doubt. They prepared to flee while watching an enormous column of vapor billow into a mushroom-shaped cloud, accompanied by showers of black, heavy material, and lightning and thunder.

(On April 8 of this year, the government ordered an evacuation of the 20,000 people living in the northern “red zone″ near La Soufrière following increasing volcanic and seismic activity. The explosive eruptions started the next day).

In the 1902 climax, a ″Great Black Cloud″ raced down the volcano’s slopes, swept over homes and farms and surged out to sea, raining scalding ash, stones and sulfurous fumes on boats of people rowing furiously away.

On the east of St. Vincent, plantation workers gazed in amazement as the implacable black curtain descended toward them, then rushed indoors or died in the open. At Orange Hill, dozens crammed into a rum cellar.

An estimated 1,600 people died, though that cataclysm was eclipsed by eruptions, the worst on May 8, at Mount Pelée on the nearby French-held island of Martinique. At least 29,000 people died there.

Most of St. Vincent's casualties were in the east, possibly and partly because workers on large plantations were less able to make an independent decision to flee, according to the study that Barclay co-authored.

La Soufrière’s continuing explosions hampered British-led recovery efforts for months, said the study, published in 2018. The eruptions accelerated the decline of the sugar industry, but other commodities recovered within a year or two, it said. New plants, including cacao, nutmeg and coffee, were introduced. Experimentation led to agricultural innovation.

The volcanic ash, which then and now spread as far as Barbados, about 110 miles (180 kilometers) away, nourished the soil. On Sunday, the Seismic Research Centre of the University of the West Indies posted a photo of St. Vincent coconut trees, fronds drooping under ash.

″The impact on vegetation is devastating in the short term but beneficial in the long term,″ the group said.

The British navy delivered aid in 1902. The USS Dixie also brought relief, along with scientists and newspaper correspondents. In an account of the eruption build-up, The Boston Globe reported ‘’a noise like the monster guns of the world's navy in perpetual action.''

In recent days, a navy ship from Venezuela, a nation long in the grip of shortages, delivered water and other supplies to St. Vincent. Caribbean island nations are sending aid.

The 1902 and 2021 eruptions are ‘’possibly on a par'' in power and intensity, but it's difficult to make a ‘’direct comparison'' because a deep crater lake existed at the time of the earlier one, Barclay said.

When flowing magma hit the lake, vaporization created ‘’a huge additional extra energy and it generated pyroclastic density currents that were very fast-moving and deadly, early on in the eruptive sequence,'' she said.

Daniel Defoe, author of ″Robinson Crusoe,″ is the purported writer of an account of an explosive eruption at La Soufrière in 1718, when Indigenous inhabitants effectively controlled the island. An 1812 eruption killed dozens, mostly enslaved Black people. Prior to this month, the last big eruption was during Easter 1979, causing mass evacuations but no deaths.

La Soufrière's history could inform St. Vincent’s residents as they recover. In the meantime, unlike their ancestors, they are getting continual updates and guidance.