Once full of hope, woeful Bengals now playing for pride 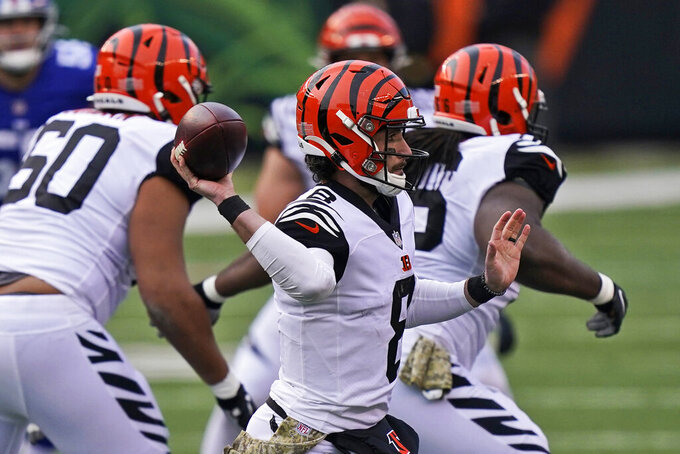 COLUMBUS, Ohio (AP) — Dealing with more than their fair share of 2020 bad luck, the Cincinnati Bengals have ranged from terrible to fairly good in stretches, sometimes in the same game.

The flicker of excitement that was growing because of the development of rookie quarterback Joe Burrow ended when the top overall draft pick went down with a season-ending injury Nov. 22.

Now with five games to go, the Bengals (2-8-1) are playing for pride — and a late win or two that might show the team has at least made some progress from the 2-14 finish last year.

“We're sick and tired of this feeling,” Taylor said.

Cincinnati lost its third straight game Sunday since a promising win over Tennessee on Nov. 1. The Bengals fell to the New York Giants 19-17 in yet another close game — five of the season's losses have been by five points or fewer — that came down to a Cincinnati blunder.

After being woeful offensively for most of the game, the Bengals scored a touchdown with 2 1/2 minutes left in the game to get within two points. After the Giants punted, Cincinnati got the ball back at midfield with 57 seconds left, needing only 15 to 20 yards to get in range for a game-winning field goal.

Next play, quarterback Brandon Allen is sacked, fumbles and the Giants recover. Game over.

“There's no excuses to be made,” Allen said.

“It does get frustrating, working hard throughout the week and get losses at the end of the week — and not getting that reward weighs on you,” said defensive end Sam Hubbard, who was home because all facilities around the NFL are closed Monday and Tuesday because of COVID-19.

"You’ve got one option and that option is to keep going and keep working, and that’s what I choose to do, keeping the faith that things are going to turn around.”

Not including Burrow, general team health. The offensive line is mostly healthy after having a string of starters out with injury or illness. Key defensive players who were hurt also are cycling back in. But the pandemic still makes the depth chart unpredictable week to week.

Allen had three previous NFL starts, last year at Denver after Joe Flacco was injured. He struggled Sunday, throwing for 136 yards and finishing with a QB rating of 67.6. The Bengals had only 155 yards, the running game was nearly non-existent, and there were three turnovers. No place to go but up.

Brandon Wilson provided the most exciting moment for the Bengals when he ran a first-quarter kickoff out of the end zone and all the way back for a score. The 103-yard touchdown was the longest in Bengals history.

There hasn't been much of a running game since Joe Mixon went out with a foot injury Oct. 18. Giovani Bernard, starting in Mixon's place, carried eight times for 32 yards Sunday. He hasn't been a threat as the featured back.

G Alex Redmond went out with a concussion in the second half Sunday. No word on when he could be ready again.

3.4 yards: Average gain by the offense against New York.