One Good Thing: Highlights of 9 months in tales of kindness 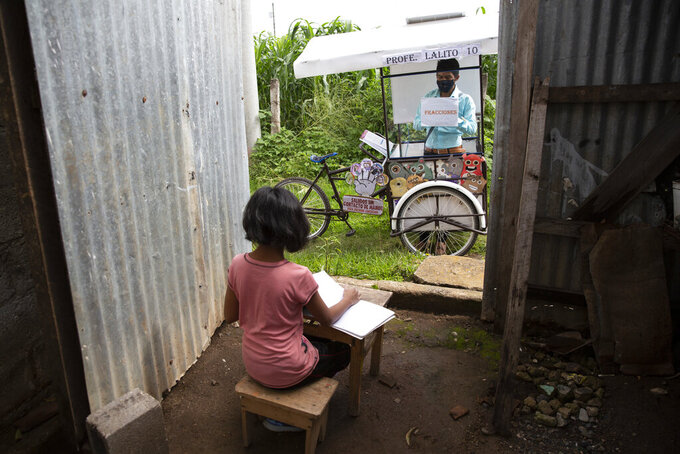 FILE - In this July 15, 2020 file photo, Gerardo Ixcoy teaches 12-year-old student Paola Ximena Conoz about fractions from his mobile classroom, parked just outside the door to her home in Santa Cruz del Quiche, Guatemala. Each day the 27-year-old sets out pedaling among the cornfields of Santa Cruz del Quiche to give individual instruction to his sixth-grade students. (AP Photo/Moises Castillo, File)

In mid-March, as the coronavirus was ravaging communities and economies around the world, The Associated Press launched its “ One Good Thing ” series to highlight individuals whose actions offer glimmers of light in dark times.

Nine months later we’ve hit every continent except Antarctica to publish more than 180 stories of kindness, good deeds and serendipity.

Here is a look back at 10 of our favorite stories of people finding ways to make a difference, no matter how small:

THE TUTU GIRLS: Four young cancer survivors who met, became fast friends and supported each other while in treatment at a hospital in Florida four years ago didn’t let the pandemic keep them from their annual reunion. Known as the “tutu girls” for their matching outfits, the 6- and 7-year-olds held their meetup on Zoom. One of the moms got the idea for the dance costumes to raise awareness about childhood cancer, and a tradition was born.

A BIRTHDAY PARADE: A fire truck blared its sirens, police flashed lights on cruisers and dozens of families in a car parade honked horns, raised signs and yelled: “Happy birthday, Jessiah!” None of them knew 6-year-old Jessiah Lee, but they all showed up for the surprise drive-by birthday party in Arlington, Virginia, organized on social media and inspired by similar celebrations that have brought joy to many children and adults during the quarantine.

CLASSROOM ON WHEELS: When Guatemala’s schools in closed mid-March, teacher Gerardo Ixcoy invested his savings in a secondhand tricycle that he and his brother converted into a mobile classroom. Each day the 27-year-old set out pedaling among the cornfields of Santa Cruz del Quiché to bring socially distanced lessons to his sixth-graders' homes and yards.

MAKING SWEET MUSIC: Members of the National Orchestra of France filmed themselves playing Ravel's “Bolero” alone at home during lockdown. Then, like building a musical jigsaw puzzle, a sound engineer stitched together their individual clips into a seamless and rousing whole. Posted online, the performance helped the musicians keep in touch with each other and with the audiences they sorely missed.

NEWLYWEDS GIVING BACK: Darshana Kumara Wijenarayana and Pawani Rasanga spent months planning a grand wedding only to see it derailed by the pandemic. Family and friends urged the Sri Lankan couple to postpone the party, but instead they chose to celebrate their love by marrying simply and then spending the day feeding the poor.

CHEERS FOR HEROES: In hard-hit European cities, residents took a moment each night to express gratitude to doctors, nurses and other health care workers. From Athens and Amsterdam to Rome and Madrid, people stood at windows or on balconies singing, cheering and applauding those on the front lines.

TRUMPETING ON HIGH: Rio de Janeiro firefighter Elielson Silva devised a novel approach to curing the coronavirus blues. Riding a fire truck’s retractable ladder as high as 200 feet, he played Brazilian tunes from that lofty perch as residents in isolation watch from their windows and applaud, flush with a restored sense of community.

TAKE MY LAND: The acreage that Kim Byung-rok bought on a quiet mountain in South Korea a few years ago was meant for farming and fresh air. But after the pandemic hit, he offered a big chunk of it to the local government, figuring it could be put to good use helping others.

TUTORING THE WORLD: A teacher at a public school in Lagos, Nigeria, helped students across the country and abroad learn math remotely during coronavirus lockdowns. Basirat Olamide Ajayi's free online classes became a lifeline for many children who were kept away from classrooms for months.