One Good Thing: Theft leads to community giving in Miami 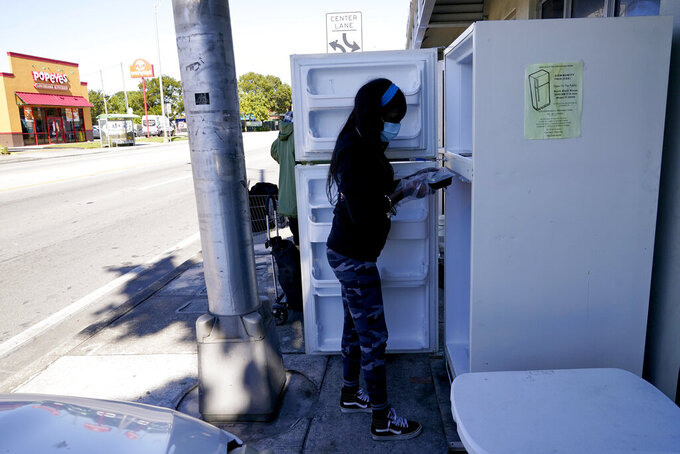 Sherina Jones restocks a community refrigerator, Wednesday, Dec. 9, 2020, in the Liberty City neighborhood of Miami. Jones offers free food for the community from a stocked community refrigerator called the Village Freedge. When one of the refrigerators was stolen just before Thanksgiving, the community and friends came together to help to purchase a new one. Jones also provides hot food and distributes numerous food pantry items. She has applied for non-profit status and is transitioning to become a food bank. (AP Photo/Lynne Sladky)

FORT LAUDERDALE, Fla. (AP) — Two days before Thanksgiving, on the eve of a turkey giveaway for dozens of jobless residents in an impoverished Miami neighborhood, Sherina Jones got word that one of the free community refrigerators she'd been stocking was stolen.

It could have been a holiday disaster. But it turned into a Christmas miracle.

Jones had been helping to feed the poor in Miami for months. Early on in the coronavirus pandemic, she was forced to shut down her beauty salon. By scrimping she managed to get by, but she knew that many in her mostly Black, low-income neighborhood were still hurting.

Worried that children were missing meals after COVID-19 closed schools, the 36-year-old cancer survivor used her meager savings to buy her first community refrigerator in August.

“Take what you need, donate what you don’t," the sign on the fridge read.

Jones gets up at 5:30 every morning to serve hot breakfasts to residents in need. One homeless man who was a frequent visitor later told her proudly that he'd gained 10 pounds (4.5 kilograms).

With an online fundraising effort she named Village Freedge, Jones expanded to three refrigerators, which she placed in different neighborhoods of Miami. About half of her clients are homeless; others are day laborers who take to-go lunches or single moms who can’t feed their kids.

When one of the refrigerators was stolen just before the Thanksgiving Day turkey giveaway, it was more than a theft. It felt like an act against a community in need.

“I cried for three days," Jones said. "I was devastated that someone would do something to hurt the community. You hurt the 80-something people I feed a day.”

Just when it seemed the Grinch-like act would ruin the holiday, something magical happened: Residents of a community where many can barely afford rent pulled together, each giving a little until they ended up collecting quite a lot.

Jones' former high-school classmate Tamesha Glegg hadn’t been in touch with Jones for years, but saw a post on social media and felt a tug on her heart. She and her husband decided to replace the fridge — and then some.

“I said, ‘Let’s just buy her two of them,'" said Glegg, an ICU nurse. “I just really love what she’s doing. I really feel like it’s our spiritual duty to do those things.”

The Rev. Michael Daily heard about the stolen refrigerator on the news. He works at a community agency that helps local churches and knew that many parishioners were counting on those meals.

He used agency funds to buy Jones a fancy double-door refrigerator and enlisted a construction worker to help build protective housing so it can’t be stolen. A group of artists designed T-shirts and donated the proceeds.

The Community Agency advertising firm scaled back on a fancy holiday party, donating huge boxes of food and about $3,500 for the refrigerator project.

All together, more than 330 people raised over $23,000 on a fundraising website.

Even after the pandemic upended her job, Joanne O’Brien still helped stock the refrigerator occasionally. But she wanted to do more. Jones introduced her to a single mom who feeds her kids breakfast from one of the community refrigerators. O'Brien bought the family a Christmas tree, as well as desks for online schooling and curtains and bedding for the home.

“The kids were jumping up and down when I was finished with the tree,” O'Brien said.

The 4-year-old told her with grave concern that this was going to be a bad Christmas with no presents, but O'Brien secretly purchased and collected toys, clothes and stockings with the children's names.

The community's response to a toy drive in December allowed Jones to give away dozens of bicycles, dolls and other presents to 400 families.

Jones still operates three free community refrigerators. She uses the extra ones to store food and donations. She has volunteers, but mostly runs the charity with her mom and aunt.

She has one leftover holiday wish: a van to transport food and warehouse space to store it in. She has applied for nonprofit status and is transitioning to become a food bank.

“People come by and stock the fridge during the evenings or buy a bulk of things and drop it off. I'm so appreciative," she said. “We’ve all come together to take care of each other."

“One Good Thing” is a series that highlights individuals whose actions provide glimmers of joy in hard times — stories of people who find a way to make a difference, no matter how small. Read the collection of stories at https://apnews.com/hub/one-good-thing.