One man lays wreaths in Normandy on this unusual D-Day 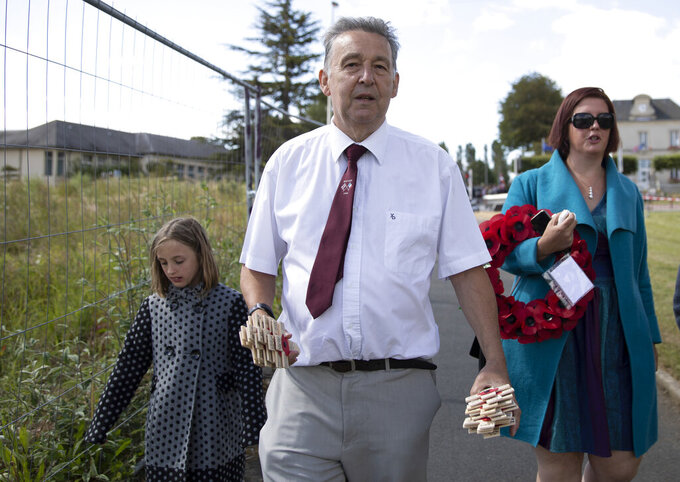 British expatriate Steven Oldrid, center, carries wooden crosses with names of WWII dead as he walks to the local war cemetery in Benouville, Normandy, France on Saturday, June 6, 2020. Due to coronavirus measures many relatives and veterans will not make this years 76th anniversary of D-Day. Oldrid will be bringing it to them virtually as he places wreaths and crosses for families and posts the moments on his facebook page. (AP Photo/Virginia Mayo)

BENOUVILLE, France (AP) — The essence of war remembrance is to make sure the fallen are never forgotten. All it takes is a wreath, a tiny wooden cross, a little token on a faraway grave to show that people still care about their fallen hero, parent or grandparent.

This year, though, the pandemic stepped in, barring all travel for families to visit the World War II graves in France's Normandy, where Saturday marks the 76th anniversary of the epic D-Day battle, when allied troops successfully stormed the beaches and turned the war against the Nazis.

So anguished families turned to the next best thing — an Englishman living on D-day territory, a pensioner with a big heart and a small hole in his agenda.

For years, Steven Oldrid, 66, had helping out with D-Day events around the beaches where British soldiers had landed — and often left their lives behind — be it organizing parking, getting pipers to show or getting sponsors for veterans' dinners.

Laying wreaths though, seemed something special, reserved for families and close friends only.

But in pandemic times, pandemic rules apply. Oldrid was first contacted in March.

“I was actually choked up when I got the first request," Oldrid said. “I'm always on the other side. Always in the background," he said.

Before he knew, it in this extraordinary year, he had become the extraordinary wreathlayer — proof that kindness cannot be counted in pounds, euros or dollars, but in time and effort to organize a day around the wishes of others.

As June 6 approached, the boxes of wreaths and grave markers piled up in his garage. And to soothe the nerves of families, he has also been filming live for Facebook several ceremonies and wreathlayings.

Among those struggling with not being able to go to Normandy this year was Jane Barkway-Harney of the British veteran Glider Pilot Regiment Society, whose father participated in the D-day landings.

“It makes me feel physically sick because you feel as though you’re letting everybody down,” she said. “I feel so strongly that it is our right and our duty to go.”

Still, whatever Oldrid is asked “I know he’ll say ‘yes' because he actually doesn’t know the word ‘no.' It is not in his vocabulary," said Barkway-Harney.

Through it all, he keeps a smile.

“It’s not ever, never will be a burden, he said “It’s a pleasure and an honor."

What does he get in return? On the internet it is “Thank you, Steve. A big hearts and thumbs up," he said.

And from his previous work helping out families and friends of veterans, he knows something else is coming too.

“They do actually bring me some English products like teabags and salad cream, baked beans and crisps for the kids.”