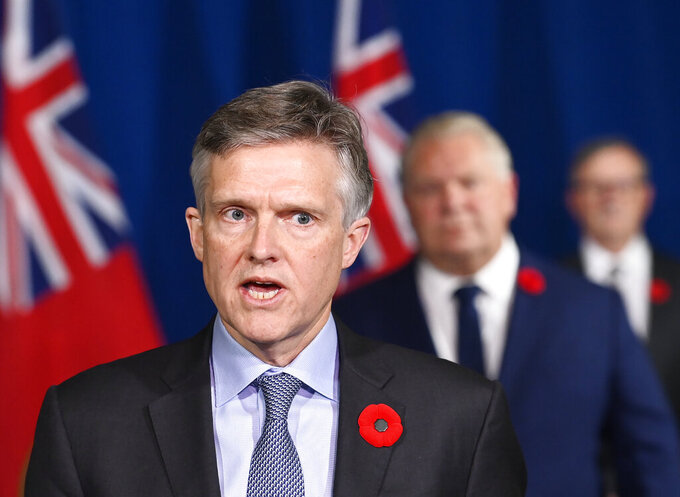 FILE - In this Nov. 3, 2020 file photo, Ontario Finance Minister Rod Phillips speaks at a press conference at Queen's Park during the COVID-19 pandemic in Toronto, Canada. Ontario Premier Doug Ford announced late Dec. 29, 2020, that he ordered Phillips to end a Caribbean vacation, saying he is "extremely disappointed" the official went abroad as the government urged people to avoid nonessential travel because of the pandemic. (Nathan Denette/The Canadian Press via AP, File)

TORONTO (AP) — The finance minister for Canada's most populous province resigned Thursday after going on a Caribbean vacation during the pandemic and seemingly trying to hide the fact by sending social media posts showing him in a sweater before a fireplace.

Ontario Premier Doug Ford said he had accepted Rod Phillips’s resignation as minister hours after Phillips returned home from a more than two-week stay on the island of St. Barts despite government guidelines urging people to avoid nonessential travel.

"Travelling over the holidays was the wrong decision, and I once again offer my unreserved apology,” Phillips said in a statement confirming his resignation.

In a video posted on Twitter on Christmas Eve, the sweater-wearing finance minister was shown drinking eggnog beside a fireplace with a gingerbread house and a little Christmas tree.

“I want to thank every one of you for what we are doing to protect our most vulnerable,” Phillips said about Ontarians hunkered down at home because of the pandemic over the Christmas holidays.

But Phillips himself had been enjoying a Caribbean vacation since Dec. 13 on St. Barts, a French island popular with the rich and famous, even as his Twitter account had suggested he was in snowbound Ontario.

Opposition parties and health officials had called for Phillips to be fired from Cabinet. One party released video of a Zoom call showing Phillips participating — also while wearing a sweater — with a picture of the legislature as his backdrop, but with sounds like waves heard in the background.

“I hope people appreciate that I disappointed no one more than myself,” said Phillips, who faces a mandatory 14-day quarantine for those returning from abroad.

The incident created a political problem for Ford, who acknowledged on Wednesday he knew Phillips was outside the country before it became public because Ford said he called Phillips “shortly after he arrived” in the Caribbean.

“I should have said get your backside back into Ontario and I didn’t do that,” Ford said.

Ontario began a province-wide lockdown on Saturday and Ford has been blaming travelers for bringing the new coronavirus to the province. Canada’s national government and the Ontario government have both repeatedly asked Canadians not to travel abroad during the pandemic.

“This is a devastating blow to the government and Ford personally because, as he has admitted, he knew that Phillips was in St. Bart’s and did not upbraid and order him back immediately," said Nelson Wiseman, a political science professor at the University of Toronto. “Ford only did so once the news of Phillips’s absence became public,.”

The Ford government already was being criticized for halting vaccination operations over the holidays and for delaying the provincewide lockdown until the day after Christmas.

Ontario set a new daily record for cases on Thursday with 3,238.

“Ford is also suffering from the slow rollout of the vaccine, the slowest in Canada,” Wiseman said.

Canada already requires those entering the country to self-isolate for 14 days and it has already banned all flights from the United Kingdom because of the new variant of COVID-19 spreading there.