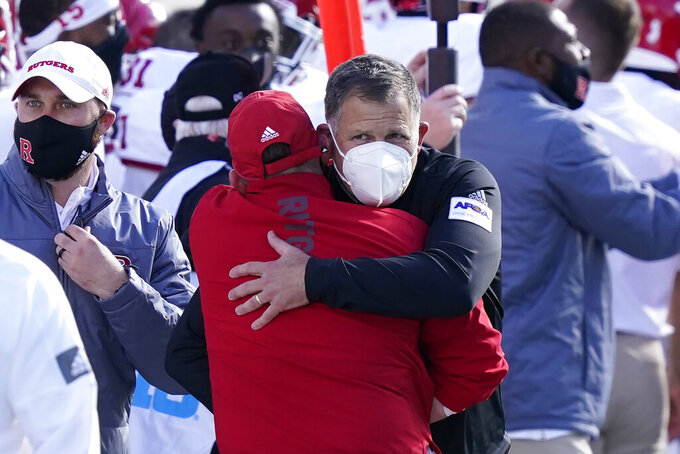 The first weekend of Big Ten football was full of surprises.

Indiana upset a top-10 foe for the first time in 33 years. Rutgers snapped a 21-game conference skid. Northwestern and Purdue moved to the top of the West Division while Penn State and Michigan State find themselves already facing must-win games to keep their title hopes alive.

Yes, it's only one game but the twists and turns are already reverberating in what could quickly become a topsy-turvy season.

“There’s hurt, everybody’s hurt. That’s understandable and that’s natural," coach James Franklin said after the Nittany Lions slid 10 spots to No. 18 following a 36-35 overtime loss to the Hoosiers. “I think you know, obviously, Ohio State’s going to be a tremendous challenge."

The mistake-prone Nittany Lions know they can't afford a repeat when they host No. 3 Ohio State and are scrambling for solutions.

Penn State had three red-zone possessions end without points, turned the ball over three times, missed three field goals and even had a gifted touchdown work against them, all of it fueling the Hoosiers' unlikely comeback.

As a result, Indiana reappeared in the Top 25 for just the second time since 1994 and now will be part of a surprisingly intriguing showdown at Rutgers to determine which team stays atop the East Division pack.

It was the first conference win for the Scarlet Knights since beating Maryland 31-24 in 2017 and now they have a chance to win back-to-back games for the first time in more than three years.

While those in Piscataway, New Jersey, was elated, the Michigan State campus was filled with dismay.

Next up is a huge risk-reward game at No. 13 Michigan, which has won the last two in the rivalry.

The West Division also has been turned upside down.

Two traditionally strong programs — Iowa and Nebraska — along with improving Minnesota all lost last weekend and will now try to chase down No. 9 Wisconsin, Northwestern and Purdue.

Last year, the Boilermakers and Wildcats won a total of seven games. With a Purdue win at Illinois, and a Northwestern win at Iowa, they'd match their combined conference victory total from 2019.

There are some similarities, too.

And with Brohm sidelined by COVID-19 and All-American receiver Rondale Moore out for undisclosed reasons, all O'Connell did was deliver his third fourth-quarter comeback in Purdue's last five games.

“He won some games for us at the end of last year," Brohm said, explaining the decision. “He's got good accuracy and he’s got good poise in the pocket. We had a little lull there at the end of the second quarter, third quarter, and Aidan found a way to kind of pick it up when he needed to. That's what he’s been good at."

Wildcats coach Pat Fitzgerald handed the reins to grad transfer Peyton Ramsey, who went 4-3 as a starter last season and led Indiana to its first bowl game in three years.

Ramsey didn't disappoint, going 21 of 30 for 212 yards with one touchdown and no interceptions against Maryland. He also ran seven times for 47 yards and another score in a 40-point victory — Northwestern's largest victory margin against a Big Ten opponent in 50 years.

“We were preaching on starting fast," Wildcats linebacker Paddy Fisher said. “We came together in the offseason and really attacked it and made that the forefront and the focus."

The Badgers canceled this week's game at Nebraska because of a COVID-19 outbreak. The Cornhusksers tried to schedule a replacement game but ended up with an unexpected bye week.

“Ultimately, the Big Ten Conference did not approve our request," Nebraska officials said. “We respect their decision.”