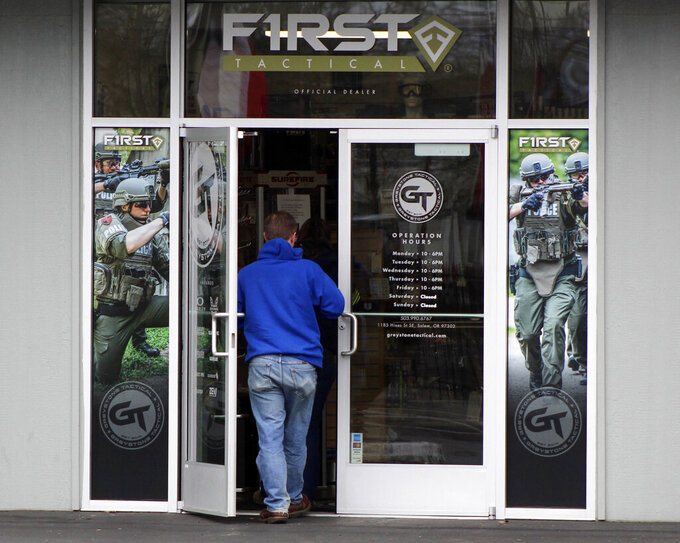 A man enters a gun shop in Salem, Oregon, on Friday, Feb. 19, 2021, in Salem, Ore. So many people are buying guns in Oregon these days that the state police are often unable to complete background checks in time, allowing the sales to proceed if the deadline isn't met. A handful of Democratic lawmakers have now put forward a bill in the Oregon Legislature that would close this loophole. (AP Photo/Andrew Selsky)

SALEM, Ore. (AP) — So many people are buying guns in Oregon these days that the state police are often unable to complete background checks in time, allowing the sales to proceed if the deadline isn't met.

A handful of Democratic lawmakers have now put forward a bill in the Oregon Legislature that would close this loophole. It's often called the Charleston loophole because Dylann Roof was able to buy a gun that way, and then murder nine Black people at the Emanuel African Methodist Episcopal Church in Charleston, South Carolina, in 2015.

“You have the power to prevent a similar act of violence here in Oregon,” Sharon Risher, whose mother and two cousins were killed in the church, said in virtual testimony Thursday before the Oregon House Judiciary Committee.

In Oregon, it's up to the state police to do a background check. And they are warning that they are overwhelmed.

“We saw exponential growth that we've never seen before,” Worthy told a committee of the Oregon Legislature on Thursday. "I can tell you that the unit is not staffed for that volume, and it would be impossible for us to stay current based on our current employees that we have.”

Nationwide, gun sales hit a historic high in January as violent riots hit the U.S. Capitol and a new president took over, continuing a record-setting surge that began as the coronavirus pandemic took hold in early 2020.

Under Oregon law, if state police fail to provide a gun dealer with an approval number or notify that the purchaser is disqualified from obtaining a firearm before the close of the gun dealer’s next business day, the dealer may deliver the firearm to the purchaser.

This bill amends that, saying plainly that the dealer may not transfer a firearm unless the dealer receives a unique approval number from the state police.

The bill generated almost 300 pieces of written testimony either praising or denouncing the measure.

Michael Smith, chairman of the Gun Owners Caucus of the Democratic Party of Oregon, said it "opens the door to a de facto ban on firearms purchases."

Witnesses also lined up to testify by video link.

Talia Wexler, a sophomore at Grant High School in Portland, named several schools, including several in Oregon, that have been bloodied in mass shootings.

“The last thing that people should be afraid of at school is a bullet,” Wexler said. "We do know that there are common-sense measure that the Oregon Legislature can take to prevent gun violence. Closing the Charleston loophole is one of them."

On the national level, Rep. Brad Schneider, D-Illinois, in December introduced legislation to close the loophole that allows some gun sales to be completed without the results of an FBI background check. Under current law, federal firearm licensees may automatically go forward with the sale of a firearm if an FBI background check is not completed after three business days.

In South Carolina, a bill in the statehouse would close the Charleston loophole by prohibiting a gun transfer until a background check has cleared. Similar bills have been filed ever since the 2015 church shooting, but have not advanced far in the GOP-leaning state.