Oregon looks at ban on using tear gas against crowds 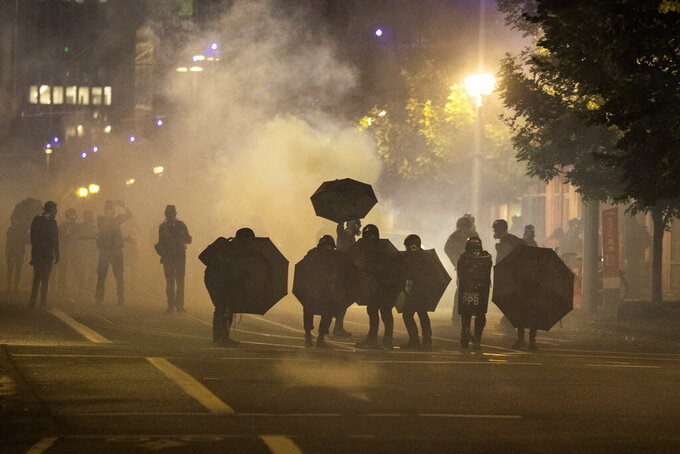 FILE - In this Sept. 18, 2020, file photo, tear gas fills the air during protests in Portland, Ore. An Oregon lawmaker is seeking to ban the use of tear gas and other agents against crowds of people in one of the most sweeping police measures in the country regarding crowd control devices. (AP Photo/Paula Bronstein, File)

SALEM, Ore. (AP) — Tear gas, pepper spray and impact munitions have been deployed by police for months against protesters in Portland, Oregon, enveloping neighborhoods and even a school yard in clouds of stinging, choking chemical agents.

Now, Oregon state Rep. Janelle Bynum, a Portland-area Democrat, is seeking to ban their use against crowds in one of the most sweeping measures in the country restricting tear gas and other riot-control munitions.

Bynum's legislative subcommittee on equitable policing heard a parade of witnesses this week via video link describe the harm caused by the substances. One woman said she almost died when tear gas was used on a crowd.

Such munitions have been regularly deployed as Portland police and federal agents have struggled to deal with some of the most persistent protesters in the country as they seek racial justice, an end to police brutality and immigration reform. Most demonstrators have been peaceful, but some have thrown objects at police and committed vandalism.

Under Bynum’s bill, local and state law enforcement could only use the munitions against an individual if physical force is justified.

Oregon State Police Superintendent Terri Davie testified that sometimes her troopers are compelled to indiscriminately use tear gas if some members of a crowd are committing crimes.

“We determine, in order to maintain or even regain the order, the entire crowd needs to be dispersed,” Davie said. Physically battling rioters to subdue and arrest them could result in injuries or death, she said.

Keeley Higgins, who has asthma, described being terrified after being gassed by Portland police while attending a protest for the first time. She and her partner tried to run to their car as the crowd was chased by riot police. Some protesters collapsed on lawns, vomiting or appearing to have seizures, she recalled, her voice choking with emotion.

“I began to have trouble breathing as I continued to stumble down a residential street,” Higgins said. “At one point I could no longer breathe. I looked into my partner’s eyes and I thought I was going to die.”

She said her partner saved her by using an emergency inhaler she had in her car.

“I don’t care if 5% or 90% of a crowd is deemed violent by the most violent police force in the U.S.," Higgins said. “Zero percent of people should ever be poisoned, let alone by their own city.”

The Cottonwood School of Civics and Science has been frequently blanketed by tear gas and smoke grenades deployed by federal agents battling protesters at the Immigration and Customs Enforcement building in Portland, across a street from the school.

“We regularly find pellets, pepper balls and munitions in our play yard,” school Executive Director Amanda McAdoo told the legislative panel, adding that soil samples have been sent to a lab for testing. McAdoo urged lawmakers to vote yes on the bill.

She said in a telephone interview that she is worried about chemical munitions residue affecting children who may return after spring break as the school looks at reopening. It has conducted distance learning while being closed for 10 months amid the coronavirus pandemic.

“We are concerned about being able to do so until we know that our yard is safe for them to be playing," McAdoo said.

The school was advised to circulate more outside air into the building because of the virus, but that raised concerns that surfaces and the air might be contaminated by the chemical agents.

McAdoo wrote to federal officials on Monday, asking that their personnel stop using these munitions in the neighborhood and disclose what chemicals have been released and the possible health impacts. She also requested help to assess contamination levels at the school and clean it up.

U.S. Sen. Ron Wyden, an Oregon Democrat, complained to Secretary of Homeland Security Alejandro Mayorkas on Tuesday about “the extensive use of tear gas and other chemical agents” in Portland, including near Cottonwood School.

He reiterated a request for details about the munitions being used by federal agents, saying the Trump administration had not adequately responded.

If Bynum’s bill becomes law, authorities in Oregon would have to inform federal agents about it and attempt to enforce it.

However, federal agents couldn’t be compelled to comply, said Jim Ferraris, the police chief in Woodburn who testified on behalf of associations of Oregon police chiefs and sheriffs.

Washington state and California are among other states looking at curbing the use of chemical agents.

Last year, Colorado lawmakers passed a law involving police accountability that bans officers from shooting rubber bullets indiscriminately into a crowd or targeting someone’s head, torso or back. Officers cannot use tear gas, pepper spray, or other chemical irritants without issuing a clear order to disperse and allowing time for people to do so.