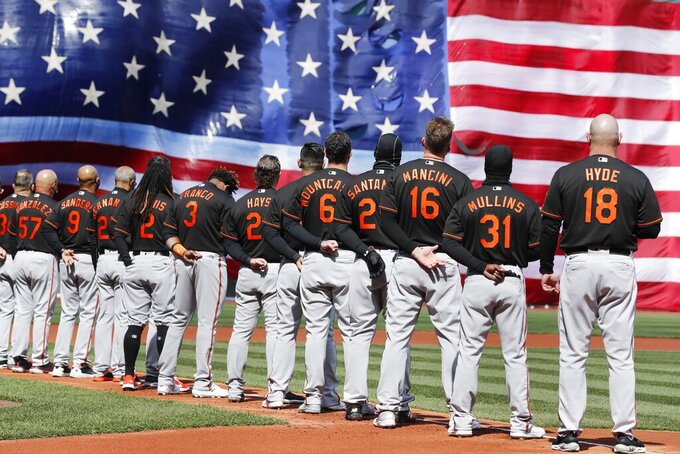 The Baltimore Orioles stand for the national anthem before an opening day baseball game against the Boston Red Sox, Friday, April 2, 2021, in Boston. (AP Photo/Michael Dwyer)

BOSTON (AP) — Orioles left-hander John Means was supposed to start the 2020 opener in Boston before a sore arm landed him on the injured list.

When he got his chance this year, he froze the Red Sox in a frigid Fenway Park.

Means pitched seven innings of one-hit ball, allowing a single to lead off the game and retiring the last 18 batters he faced on Friday to lead Baltimore to a 3-0 victory over Boston in their rain-delayed opener.

“It was a really cool experience. Something I’ll have, to tell my kids forever," Means said. “It was probably one of the best starts of my career.”

Means struck out five and allowed just two baserunners — the other on an error — earning the win when Ryan Mountcastle doubled in two runs in the sixth to break a scoreless tie. Anthony Santander added an RBI single in the eighth.

Means allowed a single to Boston leadoff hitter Kiké Hernández, then picked him off first. The only other Red Sox baserunner for him came when Xander Bogaerts reached on third baseman Maikel Franco's error to lead off the second; he was stranded there.

“Just a clinic, pitching wise,” Orioles manager Brandon Hyde said. “Gave up the leadoff single and then cruised from there.”

Tanner Scott pitched one hitless inning and César Valdez got the last three outs for the save in the combined two-hitter. The Red Sox were shut out in an opener for the first time since 1976, when Jim Palmer and the Orioles beat Ferguson Jenkins 1-0 in a matchup of Hall of Famers in Baltimore.

Cedric Mullins and Pedro Severino each had two hits for Baltimore, which finished fourth in the AL East last season, one game ahead of the last-place Red Sox.

“We knew that we were going to lose during the season, we got it out of the way I guess,” Red Sox manager Alex Cora said.

Cora, who guided Boston to the 2018 World Series championship, returned this season after serving a suspension last year for his role in the Astros cheating scandal. He received a big cheer when the teams were introduced before the game.

Boston put runners on first and second against Scott with two out in the eighth, but Bobby Dalbec struck out looking to end it. J.D. Martinez doubled and took third on a passed ball in the ninth before Valdez retired Bogaerts on a line drive to right.

Nathan Eovaldi scattered four hits and a walk over 5 1/3 innings for Boston. After Severino singled to lead off the sixth, Matt Andriese came in with one out and walked Trey Mancini.

Santander grounded a potential double-play ball to second base, but Hernández booted it, loading the bases. Mountcastle followed with a double off the Green Monster to make it 2-0.

A day after the season’s first game was postponed because of rain and cold, the Red Sox and Orioles tried again in better weather -- sunshine and puffy clouds but still a first-pitch temperature of 37 degrees.

The crowd of 4,452 -- 12% of capacity, as allowed by the state -- huddled under blankets and winter coats and had little for their gloved hands to clap for.

“It was definitely a nice feeling to have people in the seats, energy in the ballpark,” Hyde said. “Home or road, it’s so much different when there's people here. It was a nice change from last year.”

After hitting 35 homers in 2019, Mancini missed all of last season after having surgery for colon cancer. He got a hug from Red Sox catcher Christian Vázquez before his first at-bat, when he grounded into a double play, and other players .

“It means everything in the world to me,” Mancini said. “We all play against each other 19 times a year in this division. But we all have a really high respect for each other.”

After grounding into double plays in his first two at-bats, the 29-year-old first baseman walked before singling in his final at-bat. He said the game was “even more special than my major league debut.”

“When you hear you're diagnosed with cancer, baseball was the farthest thing from my mind," he said. "I made sure to soak it all in no matter what happened today, and just appreciate it.”

The socially distanced crowd was the first to take in a game at the 109-year-old ballpark since Sept. 29, 2019, when Rafael Devers singled off Orioles reliever Dillon Tate in the bottom of the ninth to score Mookie Betts in a 5-4, walk-off victory.

The pregame ceremony included a roll call of baseball greats like Hank Aaron and Tom Seaver who died in the past year. The Red Sox also remembered those who died of COVID-19: Former coach and Triple-A manager Ron Johnson was singled out before the team posted the number of pandemic deaths in Boston, Massachusetts, New England, the United States and the world.

The team also recognized those who worked through the pandemic, including doctors and nurses, vaccine researchers, other essential workers and the staff of the clinic at Fenway Park that administered more than 56,000 vaccines before team returned to the ballpark to start the season.

Hernández appeared to twist his ankle slipping off the bag in the first but he remained in the game. Boston LHP Eduardo Rodriguez pitched a simulated game at the team's alternate training site in Worcester.