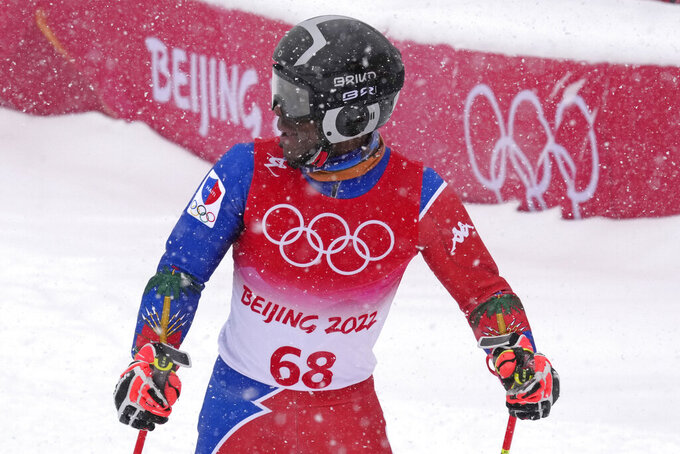 Richardson Viano, of Haiti looks back up the hill after finishing the first run of the men's giant slalom at the 2022 Winter Olympics, Sunday, Feb. 13, 2022, in the Yanqing district of Beijing. (AP Photo/Luca Bruno)

Long before he became Haiti’s first Winter Olympian, at the Beijing Games on Sunday, Richardson Viano was a scared orphan who'd just arrived in France from the poor Caribbean nation.

His new adoptive parents were driving him to their home in the French Alps. Their route that day in 2005 — from the airport where he had just disembarked, so nervous about his unfamiliar surroundings that he clung to his new dad’s leg — took them over a high Alpine pass.

It was resplendent with fresh snow and bathed in sunshine, so Andrea and Silvia Viano decided to stop to let 3-year-old Richardson take in the view.

“I said, ‘Look Richie, this is where you are going to live,'" his mother recalled. "'See the snow and everything?’”

He'd later coin his own phrase for it: “The magic powder.”

It magically lifted his mood that day, when a snowflake landed on his nose.

"It melted with the warmth,” his mother remembers. "He started laughing.”

And so was planted the first seed of what became a passion for skiing that, at the Yanqing Alpine Skiing Center in the mountains northwest of downtown Beijing, turned Viano into an Olympic history-maker for the island of his birth.

“It’s a great honor," the 19-year-old said. And, he hopes, an inspiration for others in Haiti.

"If other Haitians can ski, that would be incredible,” he said. “I want to give them a message of hope, of strength, no matter the sport. What’s important is to never give up, to fight. Anything can happen if you believe.”

With his mother on hand to watch him race, he tumbled a few gates into the men's giant slalom course that was hard to see in falling snow and fog. He was far from alone in being caught in treacherous conditions. Of 87 starters, 33 didn't complete the first of two runs — Viano among them.

“‘The magic powder’ was treacherous today,” his mother said. “It would have been nice if that snowflake could have brought him a bit more luck.”

Viano hopes to do better in the men’s slalom on Wednesday. And the big picture of his life so far is still impressive.

“It’s an amazing adventure when I think about it: leaving Haiti, arriving in the mountains, starting to ski a bit by chance. My dad was a mountain guide and he put me on skis as soon as I arrived, in 2005, and I’ve skied pretty much all the time ever since," he said.

“It really is a passion.”