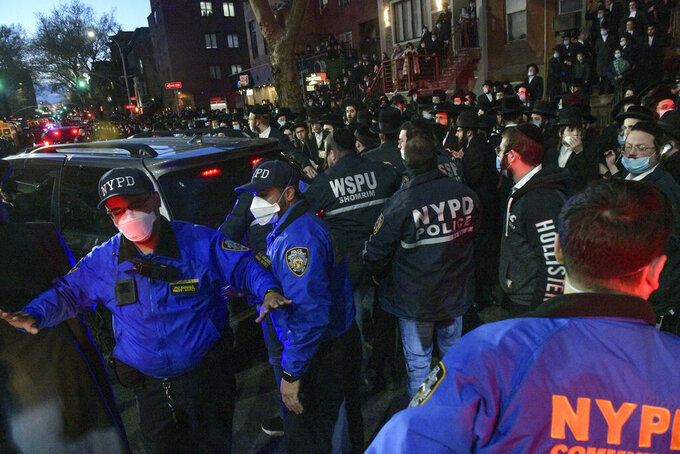 New York police officers and members of the Jewish Shorim neighborhood safety patrol instruct a crowd as hundreds of mourners gather in the Brooklyn borough of New York, Tuesday, April 28, 2020, to observe a funeral for Rabbi Chaim Mertz, a Hasidic Orthodox leader whose death was reportedly tied to the new coronavirus. The stress of the coronavirus' toll on the city's Orthodox Jews was brought to the fore Wednesday after Mayor Bill de Blasio chastised "the Jewish community" following the breakup of the large funeral that flouted public health orders. (Todd Maisel via AP)

NEW YORK (AP) — It started with a funeral that got out of hand. It ended Wednesday with some of New York City’s Jews at odds with the mayor over his criticisms of the Orthodox community as it struggles to deal with the coronavirus.

The funeral was for Rabbi Chaim Mertz, a revered Hasidic Orthodox leader whose death was reportedly linked to the coronavirus. The congregation that was hosting the gathering said Wednesday a funeral appropriate to the times was planned, with mourners wearing masks and saying their farewells from a distance.

Instead, thousands gathered Tuesday night at the Kahal Tolath Yakov synagogue in Brooklyn’s Williamsburg area. De Blasio personally joined in the dispersal of the crowd, and then tweeted that “my message to the Jewish community, and all communities, is this simple: the time for warnings has passed.”

He told reporters Wednesday that he was sorry “if in my passion and in my emotion” he had caused offense, but described “no regrets” about calling out the Hasidic funeral.

De Blasio’s comments sparked criticism from two Jewish city council members as well as Jewish groups and some of his fellow Democrats. Orthodox leaders who last month aligned in a rare show of unity against the virus were left in a painful spot, echoing other Jewish advocates in lamenting their public singling out by a mayor who has been an ally.

“This is a greater issue of how careful we need to be when we single out a specific group,” said Avi Greenstein, CEO of the Boro Park Jewish Community Council, suggesting “a level of caution toward pointing fingers.”

He was among some New York Jewish leaders who defended de Blasio as an ally of their faith who had stumbled in his handling of an already tense moment.

And the congregation that planned the funeral looked to calm tensions. A statement circulated on social media on Kahal Tolath Yakov’s letterhead described a plan to accommodate mourners safely that went awry, leading to the amassing of hundreds in the streets.

“We understand Mayor Bill de Blasio’s frustration and his speaking out against the gathering,” stated the letter, signed by congregation secretary Jacob Mertz.

Mertz added: “It also hurts that this led to singling out the Jewish community, and for that we apologize to all Jewish people.”

Orthodox Jewish communities in the New York metropolitan region were among the first to be walloped by the coronavirus, and members of a faith that’s grounded in communal prayer felt a sharp sting as they curtailed their traditional practices in response to the pandemic.

Orthodox Jewish groups united last month on a joint plea for their faithful to abide by social distancing rules during the pandemic amid concerns about large gatherings continuing in the New York area. That effort was a unique step among disparate groups to help shut down multiple daily group prayers and other traditional practices that are central to many Orthodox Jews’ daily lives.

Rabbi Motti Seligson, director of media relations for the Chabad-Lubavitch movement of Hasidism, said that “for the overwhelming majority” of Hasidic families who have abided by social distancing and stay-home edicts “to be repeatedly singled out for what they did not do, and altogether held to a standard different than the rest of society, is searingly painful.”

New York Police Department chief Dermot Shea told reporters Wednesday that most members of all faiths “have been overwhelmingly compliant” with pandemic-related restrictions, describing incidents such as Tuesday’s funeral as outliers.

The warning against singling out Jewish communities during the pandemic extended beyond members of the faith’s Orthodox branch.

“The origin of discrimination or bigotry comes when one universalizes onto a group the behaviors of one,” said Rabbi Jonah Pesner, director of the Religious Action Center of Reform Judaism.

Pesner called on members of his faith to unite against the “other-izing” of Jews.