Out of the box: Umps eject Nats GM Rizzo from luxury suite 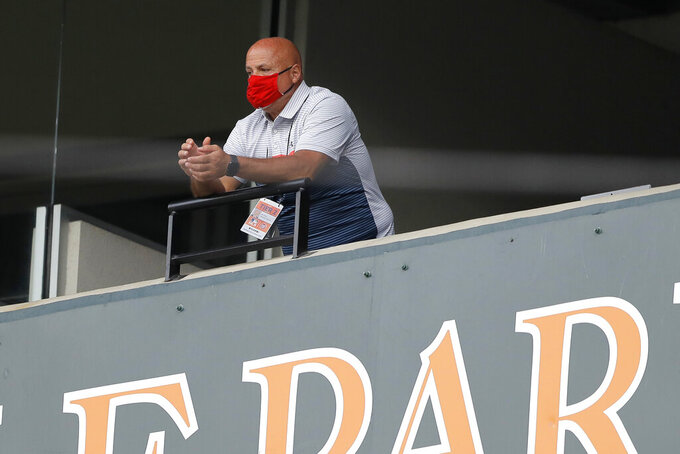 FILE - In this Aug. 14, 2020, file photo, Washington Nationals general manager Mike Rizzo looks on during the seventh inning in the continuation of a suspended baseball game between the Baltimore Orioles and the Nationals in Baltimore. The Nationals and Rizzo finalized a multiyear contract extension Saturday, Sept. 5, 2020. The 59-year-old Rizzo, who also holds the title of president of baseball operations, built the team that won the 2019 World Series championship. (AP Photo/Julio Cortez, File)

Now this was an out-of-the-box ejection.

Washington Nationals general manager Mike Rizzo was tossed for yelling at umpires from a luxury suite in Atlanta on Sunday, with longtime crew chief Joe West saying, “enough is enough.”

The 67-year-old West, on track to set the record for most games umpired in big league history next year, said the crew told the commissioner’s office Friday that Rizzo was hollering at umpires earlier in the Nationals-Braves series.

“We informed the office that if it continued we’d stop it,” West said. “And we did.”

This latest incident occurred with the last-place Nationals batting in the seventh inning, trailing NL East-leading Atlanta by six runs in a game the defending World Series champions eventually lost 10-3.

After Chris Martin threw a pitch to Eric Thames with two outs, umpire Hunter Wendelstedt stepped away from the plate, turned to face the stands and yelled “You’re out” while cocking his thumb.

Rizzo was standing outside the box, high above the plate at Truist Park, without a mask and was barking toward the field.

“He was saying, ‘you’re brutal’ and other things,” West said. “We’re in a pandemic situation, you can hear everything.”

With no crowd in the ballpark because of the coronavirus, someone on the field could be heard saying, “call security.” West then walked to the Braves dugout to use a telephone.

“I think I heard someone yelling a couple days ago, too,” Freeman said, adding, “There’s no fans in the stands so we’ve got to keep the yelling to ourselves.”

“I talked to Hunter briefly,” Martinez said. “He said we want to see what we can do about getting a certain guy out.”

Major League Baseball said it had started an inquiry.

“We have already been in communication with the Nationals regarding what transpired during today’s game, and we will speak with the umpiring crew today,” MLB said in a statement. “We will expect Joe West’s crew to provide a full account of their perspective, and we will follow up with them accordingly.”

The ejection came a day after the Nationals announced a multiyear contract extension for the 59-year-old Rizzo, who also is the team’s president of baseball operations.

Washington has struggled this season and is 14-25. World Seies MVP Stephen Strasburg recently was ejected for shouting at umpires from the stands while the Nationals played the Mets in New York.

Rizzo has gotten steamed at umpires in the past, most notably at Citi Field in 2016 after a loss to the Mets. Rizzo and ump Jim Joyce had to be separated as they argued in a hallway where the locker rooms for the teams and umpires are located.