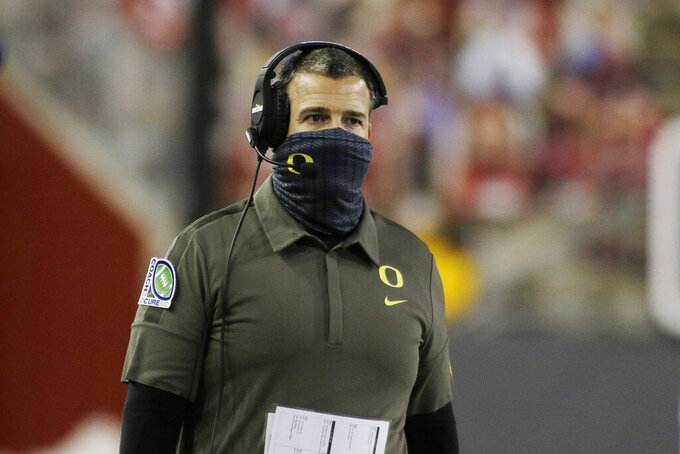 Oregon coach Mario Cristobal walks along the sideline during the first half of the team's NCAA college football game against Washington State in Pullman, Wash., Saturday, Nov. 14, 2020. (AP Photo/Young Kwak)

With so much uncertainty ahead, Pac-12 teams are doing everything they can to make sure they get enough games in to legitimately be considered for a bowl. Any bowl.

UCLA and California even got together and scheduled their own Sunday morning game at the Rose Bowl. But time is quickly running out as the league enters its third weekend with coronavirus cases spiking across the nation.

No Pac-12 team has had it worse than Utah. The Utes have seen their first two games of the shortened season canceled because of COVID-19 outbreaks, but on Saturday night they're set to host No. 20 USC (2-0).

Asked what Utah can accomplish this season with limited games, coach Kyle Whittingham said the Utes just want to play at this point.

“I think we're the only Power Five team that hasn't played yet, so that's first and foremost — just get on the field and getting an actual game, see what we've got with these new players,” he said.

Whittingham didn't rule out on-the-fly scheduling to get in games, similar to what the Bruins and Cal pulled off.

“As long as it's not a health and safety factor for our players, we're good to go,” he said. "But a caveat to that is making sure that if one team has been planning all along for the possibility of playing a certain team, and the other team was scheduled to play another team and then last minute had to switch gears, that isn't ideal.

“But this is a unique year, unique circumstances, and you've to to be ready to adapt and make changes like that.”

Four Pac-12 teams — Cal, Washington, Arizona and Arizona State — have played just once this season. Five games have been canceled, including Colorado's meeting with the Sun Devils that was set for next Saturday. An outbreak at Arizona State meant the team did not have the required players available.

Buffaloes coach Karl Dorrell said his team is closely watching how the week shakes out. Should another game be canceled, Colorado (2-0) could potentially play the unaffected team.

“We are on high alert for anything and everything that could happen in this given week,” said Dorrell, who is in his first season with the Buffaloes. “It’s kind of the nature of this year. It’s a year where everything can change day to day.”

The possibility remains that division games could be made up the final weekend of the season (Dec. 18-19) for the teams that are not in the Pac-12 championship game. The NCAA has already ruled teams do not have to finish at .500 to be eligible for bowl games.

The bowl prospects could shrink further, too. The Pac-12 initially had eight bowl partners, but is now down to six because the Redbox Bowl and the Holiday Bowl have been canceled for this season.

Under pressure to get games in, Cal and UCLA threw together their impromptu Sunday game in less than 48 hours. The Bruins emerged with a 34-10 victory.

UCLA coach Chip Kelly said he joked with Cal coach Justin Wilcox following the game that the Golden Bears should just stay in Los Angeles and play the Bruins if more games get canceled.

"I don’t know what the future holds, so every opportunity that you get to play football in a safe environment, and that is the one thing that we ask all the time, as long as it is going to be safe, then we’ll go play,” Kelly said. “I think our players understand that. They’re very appreciative of the fact they get an opportunity. We are lucky. We’ve got two games in so far and there are teams in our league — I feel for Kyle Whittingham and Utah. He’s missed two games. I feel for that group.”

So far, USC and No. 11 Oregon (2-0) appear to be in the best shape for a bowl bid, after what is likely to be a meeting between the two for the league championship.

Oregon, which hosts UCLA on Saturday, has perhaps the most to lose from canceled games. The Ducks need to win all seven games to be considered for a possible spot in the College Football Playoff. It doesn't help Oregon if the rest of the league struggles.

The San Jose Mercury News reported that Pac-12 Commissioner Larry Scott asked the College Football Playoff management committee to consider pushing back the playoffs, but the idea was nixed Wednesday. The semifinals are the Rose Bowl and the Sugar Bowl on Jan. 1, with the national championship game set for Jan. 11.

“I think everything has to be on the table, right? Since no one wrote a handbook for this thing,” Oregon coach Mario Cristobal said. “So I think as time goes on and scenarios pop up, everybody’s got to put their heads together to try to figure out what the best scenario is for the players, for the sake of the season and the guys that have actually opted in and gone all in and played."