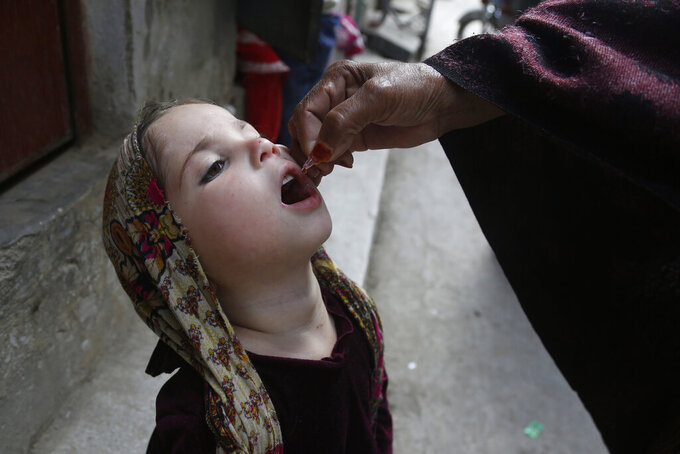 FILE - In this March 16, 2020 file photo, a health worker gives a polio vaccine to a child in Lahore, Pakistan. Pakistan’s army chief has told Microsoft co-founder and billionaire philanthropist Bill Gates that despite the challenge of COVID-19, Pakistan plans to restart polio vaccination campaigns across the country. The military said late Wednesday, June 10, that Gen. Qamer Javed Bajwa spoke by phone with Gates who has worked to try and eradicate polio worldwide. (AP Photo/K.M. Chaudary, File)

ISLAMABAD (AP) — Pakistan's army chief has told Microsoft co-founder and billionaire philanthropist Bill Gates that despite the challenge of COVID-19, Pakistan plans to restart polio vaccination campaigns across the country.

In a statement late Wednesday, the military said Gen. Qamer Javed Bajwa spoke with Gates by phone and assured him the campaign to eliminate polio in the impoverished Islamic nation would begin again soon. No start date was given.

Polio is a disabling and life-threatening disease caused by the poliovirus and Gates has worked to try and eradicate the disease worldwide.

Pakistan had hoped to eliminate the disease in 2018 when only 12 cases were reported, but there was a surge in new cases the following year. Pakistan halted its anti-polio campaign after the first coronavirus case was reported in February.

Bajwa told Gates that Pakistan's military had already been working with the government on preparations to restart campaigns against polio in the coming weeks. The nonprofit Bill and Melinda Gates Foundation has helped Pakistan to fight the disease.

Gates apparently called Bajwa because the military provides security for polio workers when the government sends them to administer vaccinations in former militant strongholds bordering Afghanistan.

Militants stepped up attacks on polio workers and security forces escorting them after it was revealed that a fake hepatitis vaccination campaign was used as a ruse by the CIA in the hunt for al-Qaida leader Osama bin Laden. Bin Laden was killed by U.S. commandos in 2011 in Pakistan.

Pakistan on Thursday reported 101 new COVID-19 deaths, bringing overall coronavirus-related fatalities to 2,356. It also reported the highest single-day number of infections with 5,834. That raised the total nationwide cases to around 119,500. Pakistan, Afghanistan and Nigeria are the only three countries in the world where polio is still endemic.