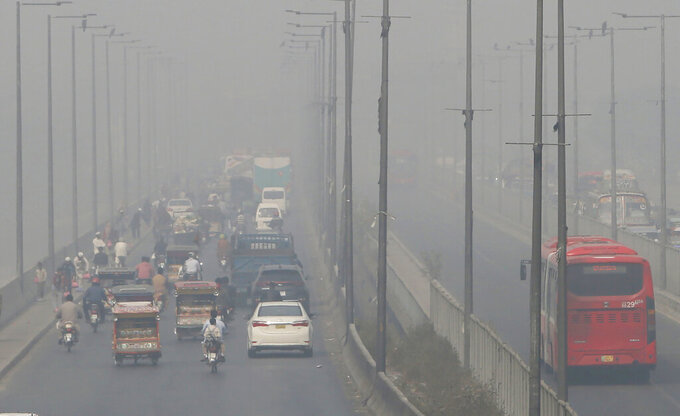 Vehicles drive on a highway as smog envelops the area of Lahore, Pakistan, Wednesday, Nov. 11, 2020. People in Pakistan’s cultural capital of Lahore were at risk of respiratory diseases and eye-related problems Wednesday after the air quality deteriorated to hazardous levels due to a quilt of smog over the city, prompting doctors to urge people to stay at home. (AP Photo/K.M. Chaudary)

LAHORE, Pakistan (AP) — A thick blanket of smog enveloped Pakistan's cultural capital of Lahore on Wednesday, prompting officials to warn that tens of thousands of the city's residents risk respiratory disease and eye-related problems while doctors urged people to stay at home.

The air quality in Lahore deteriorated to hazardous levels, putting an additional burden on the fragile healthcare system amid a surge in coronavirus deaths and new infections. The Air Quality Index at one point rose to 750 in the city's poorer areas — about 12 times the recommended level.

Earlier in the day, Switzerland-based air quality information platform IQair declared Lahore the second most polluted city, after New Delhi, India's capital. Pollution indexes peak dramatically in Pakistan in winter, when farmers burn off stubble in the fields. Winds worsen the pollution by further spreading smog across the region.

By mid-day the situation had improved, he said, as authorities took steps to keep smoke emitting vehicles off the roads and shut brick kilns across the province of Punjab, where Lahore is the provincial capital.

Lahore, once dubbed as the city of gardens, remained pollution-free for months after March, when the government imposed a lockdown to contain the spread of coronavirus. But the restriction was lifted in May, allowing a return to industrial activities and normal businesses. With cars back on the roads, the air quality gradually deteriorated, falling again to unhealthy levels.

Pollution is no stranger to Pakistan, a country of 220 million — or Lahore, with some 12 million people. Cars are the top pollutants in Lahore but the city also has other sources of pollution, including the stubble burning, steel manufacturing furnaces and the city's famous brick kilns.

“Coughing, throat infection and irritation in the eyes are common,” said Anza Farid, an environmental expert, warning that the situation could worsen in the coming weeks as more people burn garbage in the cities and farmers burn off the stubble in their fields.

Dr. Talha Ayub urged people to wear face masks for protection, both from pollution and the coronavirus. “People should try to stay at home if they can," he appealed.

Pakistan on Wednesday said it registered 21 new COVID-19 deaths and 1,708 new infections over the past 24 hours — despite a government-imposed partial lockdowns in 4,136 residential areas across the country. The government is turning to sealing off hotspots in a bid to contain rising fatalities and infections from coronavirus.

Authorities also banned large gathering, shut shrines, cinemas and theaters to contain the spread of the virus, which has infected more than 348,000 people in Pakistan and killed 7,021 since February.