Pandemic cited by Arizona in bid to avoid contempt fine 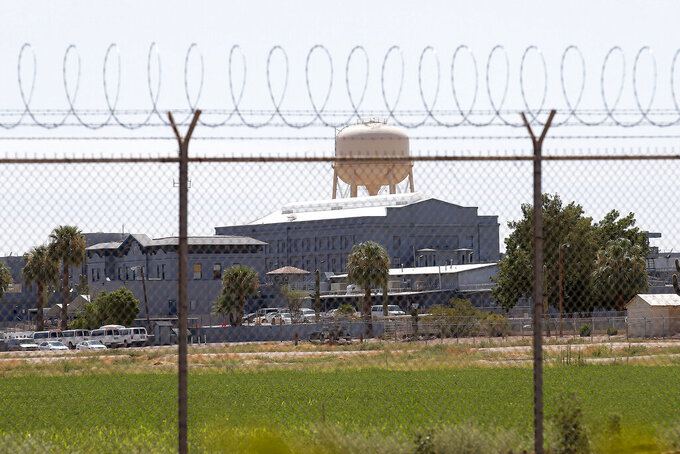 FILE - This July 23, 2014, file photo, shows a state prison in Florence, Arizona. Arizona corrections officials on Friday, March 26, 2021, cited the staffing and resource demands of the pandemic in trying to fend off a contempt of court fine against the state for failing to follow through on promises in a legal settlement to improve health care for inmates. Such a financial penalty would mark the third contempt fine the state has faced for noncompliance with the settlement. (AP Photo/File)

PHOENIX (AP) — Arizona corrections officials cited staffing and resource demands of the pandemic in trying to fend off a contempt of court fine against the state that could reach as high as $17 million for failing to follow through on promises in a legal settlement to improve health care for inmates.

Lawyers for corrections officials said in a court filing Friday that the pandemic forced people working in prisons to take on more duties, caused employees who were infected to miss work and resources to be spent on trying to guard against the coronavirus. They said the focus on protecting prisoners and staff members from the virus came at the expense of compliance with the 6-year-old settlement.

While acknowledging their clients’ noncompliance on many provisions of the settlement, the lawyers said corrections officials still made their best efforts to comply in a challenging situation. Compliance declined during periods when the state experienced spikes, when mass testing was done inside prisons and when providing care to inmates with the virus, the attorneys said.

“The pandemic diverted and dwindled precious, finite resources,” the attorneys wrote. “It required health care staff to prioritize and treat infected patients and focus their efforts on mitigating the virus’ spread.”

The state has already been the subject of two contempt fines totaling $2.5 million for noncompliance with the settlement.

U.S. District Judge Roslyn Silver, who had threatened the third round of fines, has warned the state against offering any of its past excuses for noncompliance.

In an order earlier this month, Silver wrote that coronavirus restrictions may provide a valid basis for noncompliance but emphasized that the virus can’t be used as a complete shield against noncompliance, noting health care didn’t cease during the pandemic and that the state was noncompliant on requirements within the settlement on which it was noncompliant before COVID-19.

The judge also has said the state couldn’t avoid the fine by blaming it on a problem in a given month that negatively affected compliance and instead must show that such a problem stemmed from conditions that officials didn’t or couldn’t have anticipated during the previous six years of the settlement.

In 2018, a magistrate judge imposed a $1.4 million contempt fine for noncompliance against the state, which paid the penalty but was later reimbursed for that amount by the company that at the time was providing health services inside prisons. In late February, Silver issued a $1.1 contempt fine.

Attorneys representing prisoners say the third fine could be as high as $17 million.

The settlement arose out of a lawsuit that alleged the state’s prisons didn’t meet the basic requirements for providing adequate medical and mental health care for prisoners. The lawsuit said some prisoners complained that their cancer went undetected or that they were told to pray to be cured after begging for treatment.