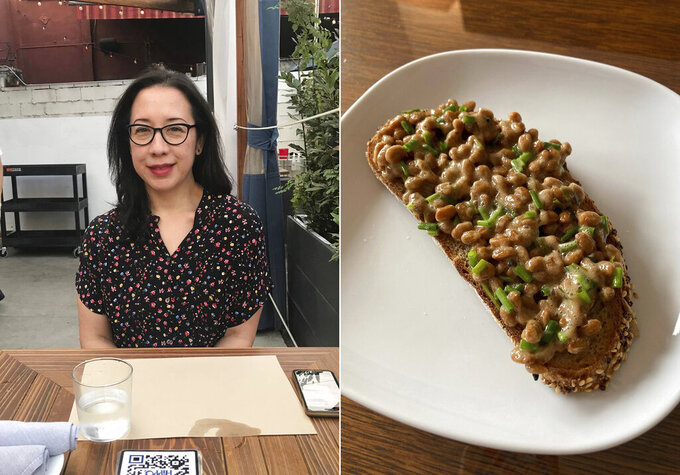 This combination of photos shows Anne Alderete at a restaurant on Aug. 12, 2020, left, and a dish of natto and chives on gluten free sourdough bread. Whether it’s kimchi, beets or broccoli, the pandemic has had a strange impact on food cravings. Alderete is enjoying something she never thought she would: natto. Made of fermented soy beans, natto is popular in Japan but considered too slimy and stinky for some. (J. Alderete, left, and A. Alderete via AP) 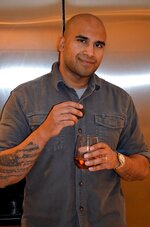 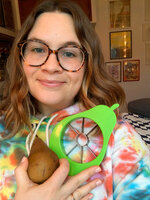 NEW YORK (AP) — Whether it's kimchi, beets or broccoli, the pandemic has had a strange impact on food cravings that goes beyond the joy of comfort eating.

Nearly a year into isolation, many people are embracing foods long forgotten or rejected for taste, texture or smell. Some have forced themselves to re-evaluate health-focused foods to help boost their immune systems. And with home cooking at a high, there's a new adventurousness in the kitchen.

For Maeri Ferguson, 31, in Brooklyn, it's all about pears.

After recovering from COVID-19, she spent months without normal taste and smell. So many foods she loved just didn't satisfy. Now, Ferguson can again sense sweetness, saltiness and spiciness, but most foods lack nuance in flavor.

“My whole life I always passed on pears. Not because I didn’t like them. They just intimidated me,” Ferguson said. “I didn’t understand the differences between varietals, how to determine ripeness. I knew what a bad, unripe pear tasted like but not a good one.”

During the pandemic, a friend gave her a handy slicer as a gift and she pushed herself to figure out how to spot a good pear. It was one of the first foods she could truly taste.

“I'm a full convert,” Ferguson said. “I’ll never forget biting into a juicy, red pear and finally tasting that sweet flavor and just the faintest tartness. It was a profound experience, and one that made me treasure a food I used to only tolerate.”

While Ferguson may not have pear sales soaring, a big pandemic winner is fermented foods.

“Health became the priority number one for many last year,” Sharova said. “Second, everyone got extra time at home, so it was finally possible to try out new things in the kitchen that require time. Third, food fermentation is perceived as a hobby on its own and it’s a great community activity, even if your community is on Zoom or just within your own family.”

Thirty-year-old Alicia Harper is now in the fermentation camp. The New York City nutritionist was well-versed in the health benefits but wasn't personally a fan before the pandemic.

“I found the fermented taste to be too strong for me and the fermented smell was off-putting. Since trying them again recently, my opinion has completely changed. I have now grown to love the taste and smell,” she said. “The pandemic really has made me appreciate my health more.”

Anne Alderete is enjoying something she never thought she would: natto. Made of fermented soy beans, natto is popular in Japan but considered too slimy and stinky for some.

“I’ve smelled it many times since I’m half Japanese and lived in Tokyo after college for seven years,” said the 47-year-old Alderete in Los Angeles. “I long wanted to understand the magic I was just not tasting. I was reminded of dirty old socks."

Now, she devours store-bought natto nearly every week. Among her favorite ways to eat it is spread on a thick slice of toast topped with cheese and melted in the broiler.

“I feel somewhat virtuous when I eat natto because the health benefits are many, but it’s also because it’s brought me closer to my roots,” Alderete said.

The long shelf life of many fermented foods is another draw.

While health concerns and comfort foods have played a role, one expert thinks that changes in the way we eat also come from having more time at home to digest an onslaught of news about nutrition and the food chain.

“The pandemic has allowed many of us to finally acknowledge some uncomfortable truths about the food system,” said Ryan Andrews, a registered dietician who wrote a book on plant-based eating.

“People have learned about the unsafe working conditions in meatpacking plants, the unfair wages of farm laborers, the chronic diseases we all face related to diet, the inhumane ways in which we raise factory-farmed animals and the immense ecological toll of industrialized agriculture,” said Ryan, an adviser for Precision Nutrition, which certifies nutrition coaches.

Suddenly, he said, “The organic lentil and mushroom soup that didn’t sound so appealing pre-pandemic became part of the weekly meal routine.”

At the same time, an analysis of Google searches by the market research firm Semrush on the weird and wonderful in changing food interests during the pandemic pointed to comfort. The company found a 17% increase in searches for “peanuts and coke” in December when compared to December 2019, and a 33% rise for “prosciutto and melon.” It found a 95% hike for “bacon and jam.”

At WoodSpoon, a New York-based app that connects home chefs with hungry customers, the comfort trend is more than a little evident. Before the pandemic, there was strong interest in healthy offerings and less processed foods. After, it was all about the babka, pasta and short rib.

“In challenging times like this, diners are looking for authentic, homemade food and want to support local chefs. The trend has been happening for some time, and the pandemic took it to the next level,” said Oren Saar, WoodSpoon’s co-founder and CEO.

Beets never got a chance from Caroline Hoffman, 25, until the pandemic arrived and she forgot to buy tomatoes for pizza sauce one day. She blended up some beets instead and away she went, overcoming her grossness factor.

“I'm now hooked. I’ve made beet hummus, beet pasta and just plain beet salads. I'm unsure why I hadn’t discovered this before but now I buy a weekly bag like it’s cereal,” said Hoffman, in Chicago.

Others are reconnecting with their childhood favorites, revisiting peanut butter and jelly sandwiches or whipping up grilled cheeses to eat with canned tomato soup. You can count raisins in as well.

Harry Overly, the “chief imagination wrangler,” president and CEO for Sun-Maid, said the raisin company saw a 1.4% increase in the last year in the number of U.S. households that started eating raisins.

“We absolutely see, especially in the past year, how consumers lean into nostalgia and reconnect with brands they remember from their childhood," he said.

It's not raisins Rex Chatterjee is after at home in the Hamptons beach town of Amagansett, New York. The treat of choice for Chatterjee, 34, and his wife is Oreos and rosé. He admits to dunking on occasion.

“The combination,” he said, "is wonderful and comes with our highest recommendation.”