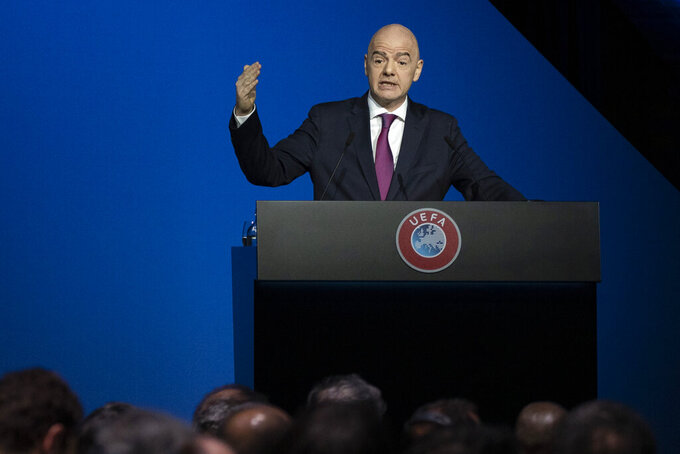 GENEVA (AP) — The coronavirus pandemic has forced one edition of FIFA's Club World Cup to be postponed, is pushing back another, and causing concern about delays to 2022 World Cup qualifying games.

FIFA President Gianni Infantino confirmed on Friday an inevitable rescheduling to the traditional seven-team tournament for continental club champions that was scheduled in Qatar in December.

South America's champion will not be known until January after the 2020 Copa Libertadores group stage resumed only this week after a six-month shutdown.

“We are discussing, we are monitoring, we are seeing if it can be hosted in Qatar maybe at the beginning of the year (in 2021)," Infantino said on Friday of the old-style Club World Cup.

A revamped, 24-team edition was to launch in June 2021 until FIFA put it on hold. That cleared space after the 2020 European Championship and 2020 Copa America were postponed for one year.

South America's 10-team qualifying group for the 2022 World Cup was unable to start in March as the pandemic spread.

A full 18-round program should begin on Oct. 8 and faces challenges to end by March 2022 ahead of FIFA's intercontinental playoffs in June 2022.

The games workload and demands to travel to South America — where COVID-19 infection rates are high and testing capacity is under pressure — are concerning the FIFPro group of player unions worldwide.

“I am concerned,” Infantino said of the congested World Cup qualifiers which Asia is skipping until next year. “This is obviously a real problem especially if the pandemic doesn’t stop or get weaker, or we don’t start playing in a normal way.”

FIFA already added extra dates for national team games in January 2022 to catch up, and "if need be, we must find other windows,” its president said.

Infantino also suggested playing qualifiers “in one venue instead of home and away” and squeezing three games instead of two into a 10-day international period.

European national teams will play three games in each of October and November to complete the Euro 2020 playoffs and Nations League groups this year. Its World Cup qualifying groups start in March.

The smaller Club World Cup — six continental champions plus the host nation's league winner — was being staged for a second year by Qatar to prepare for World Cup hosting.

“We certainly want to see if we can keep it," Infantino said.

The Asian Champions League also resumed this week and aims for a final in the second half of December.

Even if all FIFA competition games can be played as scheduled, the FIFPro union wants to let players opt out of their obligation to report for national team duty.

FIFA made concessions ahead of Europe's return to national team action in September if players were affected by travel limits or mandatory quarantine periods.

“There are good reasons why almost all governments around the world have strict travel restrictions which suggests it (South America) is still an unsafe environment,” Jonas Baer-Hofmann, FIFPro general secretary, said in an interview on Friday.

“The concept that (players) might be sanctioned for breaking a rule … to protect the health of themselves and their families can’t be serious,” he said.

Infantino said FIFA plans to publish a health protocol next week for games in South America.

“Health will be the top, top, top priority,” he said. “We’ll never put at risk the health of anyone."