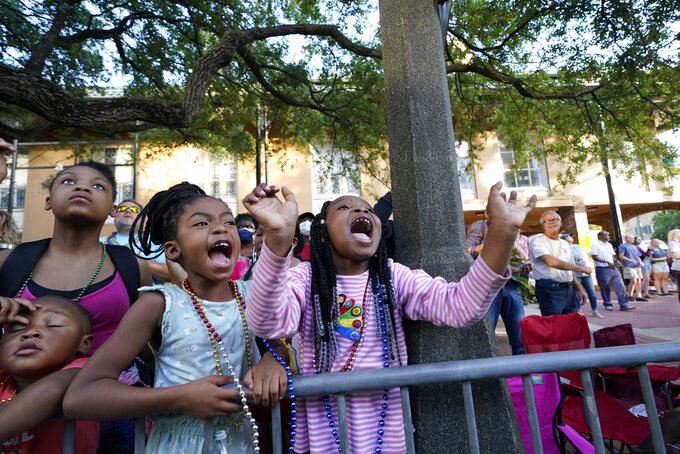 Children scream for throws during a parade dubbed "Tardy Gras," to compensate for a cancelled Mardi Gras due to the COVID-19 pandemic, in Mobile, Ala., Friday, May 21, 2021. (AP Photo/Gerald Herbert)

MOBILE, Ala. (AP) — Thousands of joyful revelers, many without masks, competed for plastic beads and trinkets tossed from floats as Alabama's port city threw a Mardi Gras-style parade Friday night, its first since Carnival celebrations were scrapped earlier this year by the COVID-19 pandemic.

Many lined up shoulder-to-shoulder and several deep along sidewalks, shouting and cheering as nearly 30 floats and several high school marching bands crossed a stretch of downtown Mobile. With both COVID-19 hospitalizations and vaccinations ebbing, many partied with abandon.

It was definitely not a Mardi Gras parade: Those can only be held during Mardi Gras, the period before Lent. But it felt a lot like one, which was a big part of the goal after months of lockdowns, illness, deaths and face masks.

James L. Hurst said he was jubilant to be out partying after a difficult year. Many had no face coverings amid an upbeat mood sweeping the crowd on a balmy spring night with clear skies. Some took part in small house parties near the parade staging point. Others on the route eagerly held up hands, aiming to catch cheap beaded necklaces tossed by riders atop the floats.

“We didn’t get a chance to celebrate our Mardi Gras last year because it was canceled because of the COVID-19,” Hurst told The Associated Press. “It feels great to be out! We have our vaccines and we are ready to go!”

He called it the start of a new era, adding, “My momma had the COVID and it was like three months before I got to see her before she got over it. She made all of us get our vaccines.”

Christopher Robinson, a longtime Mobile resident and a king of one of the parade groups — called krewes — said he was “raised on Mardi Gras” in this port city and was just glad to be able to celebrate again after such a year.

“Oh, we hate the pandemic,” Robinson said. “But you know what? It brung us back to a great season to be able to celebrate and come back even louder than before. Celebrations, friends, family, having a good time. This May 21st is bringing us back together as we would normally do it.”

Police officers on the parade route cheerfully picked up beads and trinkets from the streets and handed them to children in the crowd, which was kept back behind barricades. The booming high school marching bands, together with shouts from the crowd, provided a soundtrack for the party. The events of the day included a ship commissioning and nighttime fireworks.

“During the past 14 months to 16 months or so it’s been very difficult to make it all work, but this is a real blessing,” Stephen Toomey, who owns a Mardi Gras supply company, told WALA-TV.

Statewide hospitalizations from COVID-19, the illness caused by the new coronavirus, are at the lowest point since April 2020, although more than 11,000 have died in Alabama and more than 540,000 have been infected. With only about a quarter of the state's population fully vaccinated, the state's immunization rate has trailed the nation for months.

Vaccination rates in Mobile County roughly mirror those of the state, with about 25% of the area's more than 400,000 residents immunized. Some feared in advance that, despite the latest federal guidelines about face masks, large numbers of unvaccinated, unmasked people could clog the parade route.

“Like during a traditional Mardi Gras event, everyone needs to exercise personal safety and have a safe and wonderful event,” he said.

New Orleans, where Mardi Gras celebrations also were canceled this year to slow the spread of the coronavirus, has not attempted a similar event.

The original parade route was expanded because of the high level of interest, organizers said, and 21 Mardi Gras societies were participating with downtown hotels nearly sold out. Restaurants and bars were planning special events and deals.

While the parade's theme is “Celebrating Mardi Gras” and Mobile, it was actually meant to mark the commissioning of the Navy's new ship USS Mobile, a shallow-water combat vessel manufactured in Mobile. Aside from the parade, receptions, a breakfast and a commissioning ceremony were also part of the plans.