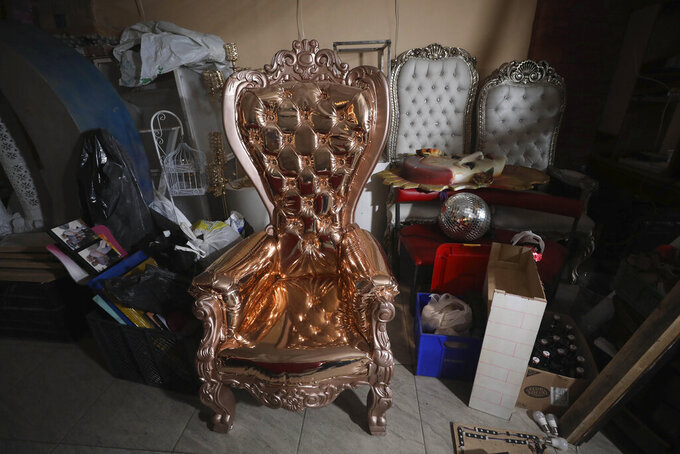 Chairs and decorations are stored in an events hall run by married couple Jamer Gonzalez and Angela Camargo in Bogota, Colombia, Tuesday, Oct. 13, 2020. Before the new coronavirus pandemic broke out they organized about nine weddings, birthday parties and company lunches each month at his hall in a working-class district of Bogota, making enough money to live comfortably and send his two eldest daughters to college. (AP Photo/Fernando Vergara)

BOGOTA, Colombia (AP) — Jamer Gonzalez used to organize about nine weddings, birthday parties or company lunches each month at his banquet hall in a working class district of Colombia's capital, earning enough to live comfortably and send his two eldest daughters to college.

Now, after months of pandemic restrictions, he is on the verge of bankruptcy and can't even afford rent for a family home. So his daughters have dropped out of university, and the family has moved into the Pegasus Events Hall, which once provided a living.

The family of five and their white cat sleep in rooms that were used to store tables, chairs and party props, including a giant throne used for quinceanera celebrations — the festive parties held by families when a daughter reaches her 15th birthday. A vintage Ford sedan Gonzalez provided for weddings is parked in the main hall, next to a desk that he brought from their old apartment.

“We are not asking for charity,” said Gonzalez, who hasn’t been able to host any parties since March because of lockdown rules. “All we ask the government is to let us work.”

Colombia has been gradually reopening the economy following six months of restrictions imposed for the pandemic. But some businesses, including movie theaters, bars and banquet halls, remain closed as officials try to limit indoor gather.

Representatives of these industries are urging the government to let them open -- with bio-security measures. They warn that thousands of family-owned businesses are about to disappear.

“Our sector has been hit extremely hard,” said Francy Salazar, president of the Colombian Association of Event Planners, a trade group with 1,700 members. Salazar said two event planners have committed suicide during the pandemic as they became overwhelmed with debt and uncertainty.

Others have moved in with relatives and struggle to make health insurance payments. Event planners were considered too well off before the pandemic to qualify for free government health care.

“The government says we need to reinvent ourselves,” Salazar said. “But we haven't had any kind of support."

Local officials have been reluctant to authorize indoor gatherings, fearing a second wave of coronavirus infections like the one currently hitting Western European countries.

In Bogota, where Gonzalez has his business, Mayor Claudia Lopez said last week that clubs, bars and banquet halls will not be allowed to open until next year.

“There will be lots of families getting together in December ... and that will increase contagion, its inevitable,” the mayor said.

To help businesses survive, President Ivan Duque's administration gave debtors a two-month moratorium on their loan payments at the beginning of the pandemic and promised to subsidize up to 40% of payrolls at small- and medium-size businesses.

Gonzalez said it has been impossible for him to tap into the subsidy because his business is entirely family run and does not have a steady payroll.

“When we do an event, my daughter takes photographs, my wife takes care of decoration and my other daughter does the videos,” he said. “We work collectively, but none of us are listed as employees.”

He said that before the pandemic hit, his banquet hall and events company was making a profit of around $4,500 a month on sales of $15,000. The family is getting by on about $250 each month that they make selling balloon and floral arrangements to people who hold parties at home.

Gonzalez said that in starting the business, he invested about $250,000, including construction of the banquet hall, permits, furniture and props.

He is several months behind on the $1,100 monthly mortgage payment for the hall and is being pressured by the bank to refinance the loan. The family fears the bank may try to repossess the hall, leaving them without their business and the place they now call home.

“Before the pandemic we used to be a normal family with dreams” said Gonzalez’s wife, Angela Camargo. “Now we can’t even afford to go out for a meal.”