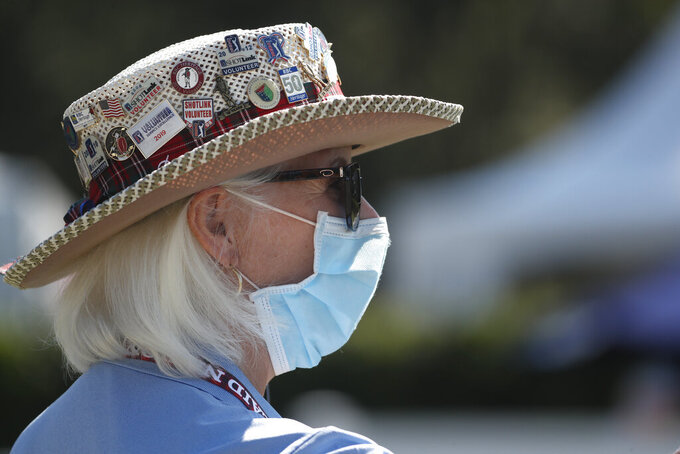 Cheryl Pearce, a volunteer working the first tee, wears a mask as a precaution against the coronavirus, at the start the third round of the RBC Heritage golf tournament, Saturday, June 20, 2020, in Hilton Head Island, S.C. (AP Photo/Gerry Broome) Cheryl Bearce

“This whole COVID thing has been really bad all around,” said Forest Casey, a fourth-generation fireworks salesman at his family-owned shop in Columbia. "For whatever reason it makes people really want to buy fireworks.”

South Carolina has some of the most liberal fireworks laws in the nation. Stands across the state sell pyrotechnic bricks that launch a dozen or more shells, setting off explosions that can rival a small town's. Meanwhile, municipal celebrations across the state have been canceled.

Fireworks injuries are unfortunately common, but this year it's the potential for crowds to gather that really concerns health officials in South Carolina, which trails Arizona and Florida in the 14-day average of newly diagnosed COVID-19 cases, when adjusted for population.

The current spike started several days after Memorial Day, when people tired of lockdowns flocked to beaches, lakes and private parties, often without wearing masks or staying distant from other people.

With Republican Gov. Henry McMaster refusing to impose a statewide mask rule, dozens of local governments have required face coverings, while some cities and counties instead resolved to urge people to wear masks, and other localities adopted no rules at all.

Along with surrounding Horry County, Myrtle Beach is one of the nation’s worst hot spots for COVID-19, and officials in several other states now blame their outbreaks on vacationers coming home from the resort city.

“I hate the perception that people have right now, as any city would,” Myrtle Beach Mayor Brenda Bethune said. “And we need to do everything we can. We are a great vacation destination for millions of people and we want our families to come back here.”

Myrtle Beach passed a mask requirement Thursday, now in effect, that requires people to cover their mouths and noses when indoors in stores, waiting for food in restaurants and most other public areas. But this rule doesn't apply to the beach, where vacationers hoping to leave their worries behind them haven't been wearing masks.

On Friday, Horry County officials voted to require that face coverings be worn in numerous businesses including grocery stores, retail shops, restaurants and hair and nail salons. The ordinance is effective immediately.

South Carolina's surging caseload also caused the governor to reverse his plan to allow some limited visitation of people inside nursing homes and assisted living facilities. Visitors have not been allowed to see residents, other than those on the brink of death, since March 13.

“This is a heartbreaking situation for loved ones, but the rising rate of COVID-19 infections and hospitalizations leaves us no choice,” McMaster said on Twitter.

The governor also posted several pictures of him in a mask with different slogans as part of a new “Wear It” campaign. One said “Lives depend on it” while another said “Jobs depend on it.”

At Casey's Fireworks Friday, customer and Columbia resident Rick Hiott said the pandemic isn't changing most of his family’s plans this year, with one exception. The annual “Celebration of Liberty” show put on by his church is going virtual. Hiott, who sings bass in the church choir, said they split into small groups and prerecorded patriotic songs for the show a couple of weeks ago.

Another shopper, Jamie Parrott, said he intends to stay at home with his grandchildren, setting off fireworks safely and eating hamburgers. A pediatric neurologist, he said these are really minor sacrifices, and worth it to keep older people safe.

Jeffrey Collins contributed to this report.