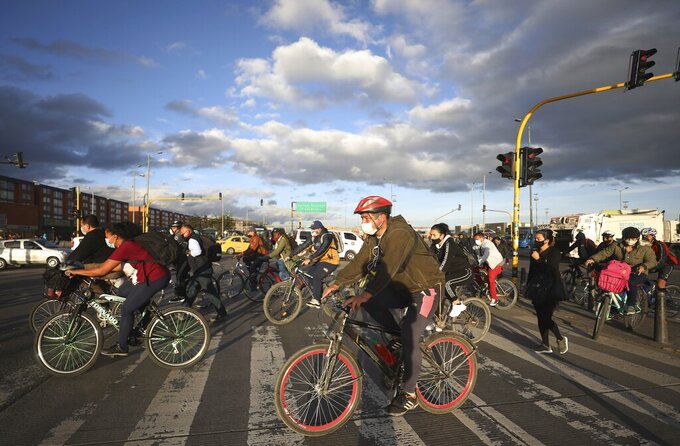 Commuters ride their bicycles, most of them to their jobs, in Bogota, Colombia, Friday, Aug. 28, 2020. The city has mandated that public parking lots expand spaces for bicycles by 20% and refurbished paths that run along busy roads next to cars. (AP Photo/Fernando Vergara)

BOGOTA, Colombia (AP) — Luis Fernando Muete used to go to work on his city’s crowded bus system. But he's been using his bicycle much more frequently since the pandemic began.

It saves the gardener long waits at a bus station in a poor neighborhood on the outskirts of the city. And it poses less of a risk to his health.

“With all that is happening, its better to avoid crowded places,” Muete said as he stopped at a traffic light on his way to the city center, wearing jeans and a checkered shirt. “Using a bike is fast and cheap.”

Cycling has long been a popular sport in Colombia, the home of defending Tour de France champion Egan Bernal. But the pandemic is now pushing more people to commute by bicycle in the South American country, where only one city has a subway system and most people still go to work on buses or cars.

In the capital of Bogota -- a city of 8 million, where more than 210,000 coronavirus infections have been reported -- the increased demand for new bicycles has left many shops struggling to import more stock.

Bike House, Colombia’s second largest bicycle importer, said that its sales increased by 150% in July. The company imported 16,400 bikes in the first semester of the year -- 4,000 more than last year -- but said it's already out of some models and it awaits new shipments from China.

Most bicycles worldwide are made in China, where factories have struggled to keep up with growing demand from Europe and the United States, also spurred by the pandemic.

“We are probably one of the last places on their list,” said Martha Cecilia Sanchez, the general manager of Distrito Bike, a Bogota shop that specializes in selling the Cannondale brand. “It used to take four months for orders to arrive. Now it takes eight months” she said.

The small shop said it's been selling around thirty bikes each weekend during the pandemic, while previously it sold 15 to 20. Sanchez said that recent sales have been “better than the Christmas season.”

Across the street, the Nissi bike store said it had experienced a similar boost. It sells road bikes, mountain bikes, hybrids and even state-of-the-art bikes for time trials that cost as much as a small car. It was selling about 15 bikes a day before the pandemic and now sells 25.

“People are buying them to go to work, but also for pleasure” said sales manager Juan Pablo Garces. “It’s an ecological form of transport and will help us to get cars off the streets.”

Local governments in Colombia are also encouraging bicycle use. Bogota Mayor Claudia Lopez turned traffic lanes over to bicycles as the pandemic broke out, adding 85 kilometers (53 miles) to the city’s network of bike paths.

Bogota was already a Latin American leader in bicycle use, registering about 880,000 trips each day before the pandemic.

In August, 13% of all journeys in the city were taken on bicycles according to municipal government data, up from 10% in February. It’s a modest increase, but officials expect the trend will pick up as restrictions on the economy are lifted and more people return to work in offices.

“Fifty-nine percent of people we have surveyed during the pandemic have said they would move around on bikes if it was safer and if infrastructure improved,” Bogota’s Mobility Secretary Nicolas Estupiñan said this week.

The city has mandated that public parking lots expand spaces for bicycles by 20% and refurbished paths that run along busy roads next to cars, but its growing crime rates discourage bicycle use.

Police say 1,022 bicycles were stolen in Bogota in July, almost twice as many as in the same month last year. Sometimes thieves knock riders off their bicycles when they slow down and attack victims with knives and guns.

To make biking safer, the city has boosted registration campaigns for bicycles, improved lighting in dangerous areas and increased police presence at spots where bicycle theft has occurred.

Cristian Gutierrez, a salesman at Class Bikes, said his customers are well aware of the security situation, with most seeking bicycles that sell from $150 to $250. “People don’t want to buy an expensive bike and have it stolen” Gutierrez said. “This city is still a bit dangerous.”