The pandemic's toll includes an airplane parts plant in Va. 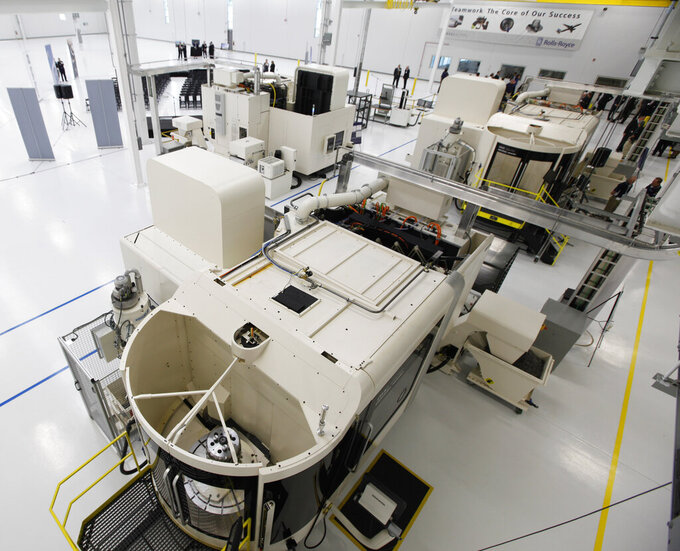 FILE - In this May 2, 2011, file photo, several computerized milling machines are set up at the Rolls-Royce Crosspointe manufacturing and research facility in Prince George, Va. The Rolls Royce plant in Virginia that builds turbine blades for jet engines laid off more than 100 workers earlier this year and plans to close the plant in June. (AP Photo/Steve Helber, File)

The day after graduating high school, she got a job making airplane engine parts at a Rolls Royce factory in Virginia for $18 an hour. By 22, she had an associate’s degree and planned to apply for higher-skilled positions paying up to $40 an hour.

O’Berry was laid off in July with more than 100 coworkers at the plant in Prince George, which is about 40 miles (about 64 kilometers) south of Richmond. In August, the Britain-based company said the facility would close permanently by the middle of 2021 after employing about 400 people at its peak.

The pandemic has disrupted so many different aspects of the American economy, from restaurants to movie theaters. The fate of this Rolls Royce plant is one example of the impact on jobs in the nation's hard-hit civil aerospace industry.

O’Berry’s job is one of tens of thousands that industry observers said have been lost this year. And they say they're not just any jobs: they're high-skilled positions that don't always require a college degree and often pay 50% more than other manufacturing trades.

O’Berry, who lives in Chesterfield, said options for similar positions in the area are limited and often pay less. She found another job with a manufacturer, whom she declined to name.

“But I did quickly see that Rolls Royce was the best thing around,” she said.

Before the pandemic, jobs in civilian airplane manufacturing were already disappearing. That's because Boeing's 737 Max planes had been grounded after two deadly crashes, impacting the supply chain.

For example, Spirit AeroSystems, which produced the Max's fuselage and other parts, said in January that it would eliminate 2,800 jobs in Wichita, Kansas.

The pandemic made the situation far worse. Boeing, for instance, said it will have 30,000 fewer workers by the end of next year through job cuts, retirements and other employee departures. The Chicago-based company has airplane assembly plants near Seattle and in South Carolina.

The Aerospace Industries Association warns that a total of 220,000 positions in the U.S. are at risk. The trade group is pushing for federal legislation that would create a public-private partnership to protect jobs.

“Air traffic is already ticking up, but it’s just happening very slowly,” said Eric Fanning, CEO of Aerospace Industries Association. “All of the projections are three to five years to get back to where it was.”

When the Rolls Royce plant opened in Prince George in 2011, then-Virginia Gov. Bob McDonnell said at a ceremony that Americans “need to build things again.”

Workers at the plant use computerized machines and various tools to produce blades for turbine engines. They also create rotative engine discs by carving out large pieces of titanium and other metals.

Rolls Royce builds some of its engines for widebody jets that cross oceans - and the pandemic has been particularly devastating to international travel, said Richard Aboulafia, an aircraft industry analyst at the Teal Group. He said that Rolls “is kind of at the epicenter of all this unpleasantness.”

Donald Campbell, a spokesman for Rolls Royce North America, said in a statement that the “historic collapse” of civil aviation forced the company “to make difficult, but necessary, decisions to protect the future of our business.”

The plant's current and former workers have been looking for jobs. And local officials hope to lure a new company into the soon-to-be shuttered plant.

Phillip Hladik, who inspects the quality of the metals used in the engine disks, hoped to work at the plant for several more years.

Hladik said he's leaving for a quality assurance job with a power distribution company. It pays $1 less an hour and requires a 70-minute commute each way. But there's room for growth.

“I'm one of the lucky ones where I didn't have to take a massive pay cut,” he said. “The aviation industry pays well. A lot of my friends have accepted $8 to $10 pay cuts to have the security.”

As for the future of the plant, it's only a decade old and could easily serve another industry, such as pharmaceuticals, said Keith Boswell, president and CEO of the area's economic development group, Virginia's Gateway Region.

“You have a campus of roughly 1,100 acres that's been used for best-in-class, advanced manufacturing,” Boswell said. “Somebody out there is going to be looking for what they have.”