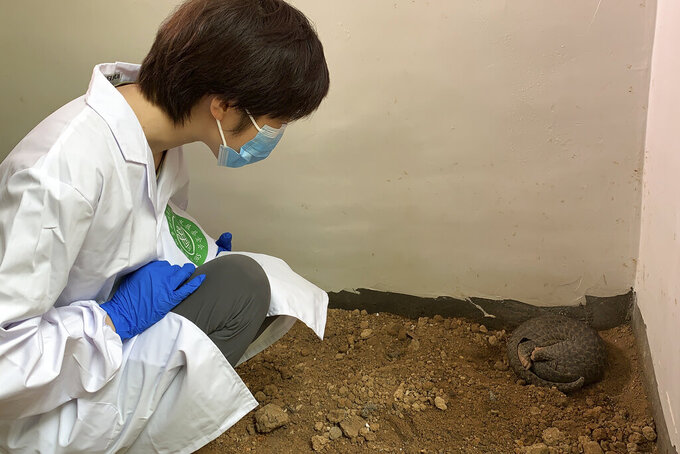 In this photo taken June 11, 2020 and released by CBCGDF, Sophia Zhang, a staffer from China Biodiversity Conservation and Green Development Foundation or CBCGDF, watch as the Pangolin named Lijin curls up for a rest at the Jinhua wild animal rescue center in eastern China's Zhejiang province. (CBCGDF via AP)

BEIJING (AP) — Activists in China have released a pangolin into the wild to celebrate new protections for the armadillo-like animal whose numbers in the country have dropped to near extinction levels.

Volunteers had rescued and rehabilitated the pangolin nicknamed Lijin after it was found by a fisherman in the eastern Chinese province of Zhejiang.

“This is a good start … but this is not good enough,” said Zhou Jinfeng, secretary-general of the China Biodiversity Conservation and Green Development Fund, the group behind the lone pangolin’s release on Thursday.

“We will release a lot more soon,” said Zhou, who has vowed to free all pangolins in captivity in China.

The U.S.-based group Save Pangolins said China’s granting of top-level protected status earlier this month was “a massive win for pangolins” after years of weak enforcement of existing restrictions. Pangolin scales are an ingredient in traditional Chinese medicine and its meat is considered a delicacy by some.

That has made pangolins “one of the most illegally traded mammals on the planet” with an estimated 1 million sold in the past 15 years, according to the Environmental Investigations Agency. Seizures have been recorded from Belgium to Singapore to Australia and the Philippines.

China’s increased protection forbids the raising of pangolins in captivity and the use of their scales in the nation’s mammoth traditional medicine industry.

Zhou said that efforts to halt the sale of pangolins in China were buoyed by a raise in global awareness of the wildlife animal trade linked to the outbreak of the coronavirus in the central Chinese city of Wuhan.

The June 5 order from the National Forestry and Grassland Administration did not explicitly mention the outbreak as a reason for the measure, but the timing appears to indicate it could be part of China’s nationwide crackdown on the wildlife trade following the pandemic.

Scientists say the coronavirus was most likely transmitted from bats to humans via an intermediary animal such as the pangolin.

Trade in wildlife including bats and pangolins has been linked to so-called zoonotic diseases that leap from animals to humans, and China quickly cracked down on the industry in a series of measures long-promoted by environmental groups.

Zhou said China's native pangolins have been all but wiped out. Over the past five years, Zhou and volunteers found only five where hundreds of thousands lived just three decades ago.

Zhou said the new protections give groups like his the right to sue businesses and individuals selling pangolin scales. However, he wants to go a step further by releasing into the wild all captive pangolins in China and burning all confiscated pangolin scales, similar to how Kenya incinerated seized elephant tusks in a bid to end the illegal trade that continues to this day.