Panthers face growing dilemma on whether to keep WR Samuel 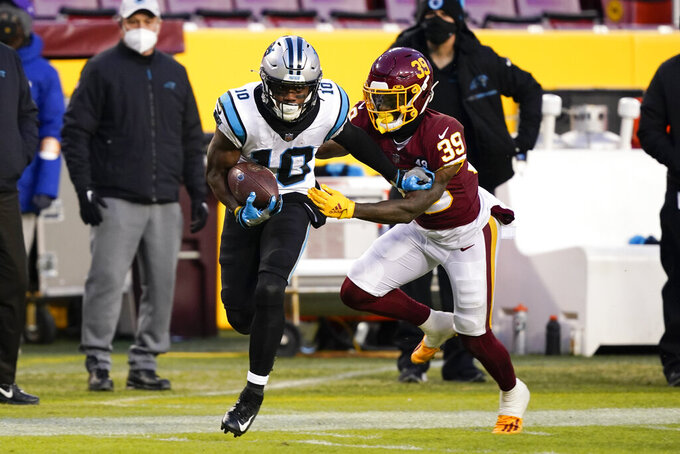 Carolina Panthers wide receiver Curtis Samuel (10) runs with the ball as he is chased by Washington Football Team defensive back Jeremy Reaves (39) during the first half of an NFL football game, Sunday, Dec. 27, 2020, in Landover, Md. (AP Photo/Susan Walsh) 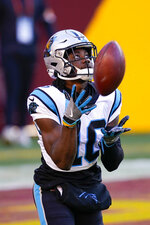 CHARLOTTE, N.C. (AP) — Panthers wide receiver Curtis Samuel continues to show just how valuable he is to the Panthers.

The big question as the offseason approaches is will Carolina have enough salary cap space to reward him with a big contract or allow him to leave in free agency?

Samuel caught all five passes thrown his way for 105 yards, including a 44-yarder that set up a score, and ran seven times for 52 yards in a 20-13 victory Sunday over Washington.

Given the season he’s had so far, the speedy Samuel’s stock has increased immensely after catching 70 passes for 733 yards and three touchdowns and rushing for 197 yards and two TDs, potentially making him a top-10 free agent prospect when the market opens on March 17.

Panthers coach Matt Rhule loves how Samuel plays and his knack for making big plays on third downs, but it's unclear if the team will have enough money under the salary cap to retain him. According to Spotrac.com, the Panthers only have $25.8 million to spend in free agency next offseason and most of that is earmarked for keeping offensive tackle Taylor Moton.

The Panthers have two 1,000-yard receivers in D.J. Moore and Robby Anderson, so it would be quite a lot of money to invest in player who doesn't regularly start for Carolina and is considered the No 3 receiver.

He only played 56% of Carolina's snaps on Sunday.

However, a decision on Samuel's future will largely be up to the team's next general manager, whomever that may be. The Panthers fired longtime GM Marty Hurney last week and are looking for a replacement.

Defensive coordinator Phil Snow has done what Rhule described as an “amazing job" this season, particularly considering how young Carolina's defense is — the Panthers drafted seven defensive players — and the lack of preparation time this offseason because of COVID-19.

“He’s adapted personnel,” Rhule said. “Like even this week, we had (Brian) Burns like in some pass rush situations, but we didn’t have him in the three‐down stuff, so we put three linebackers on the field. I think Phil just does a great job and his group does a great job of adapting and so we’ve changed some of the things that we’re doing.”

Panthers quarterback Teddy Bridgewater still has a habit of taking untimely sacks instead of getting rid of the ball. It happened again on Sunday in the first quarter when Bridgewater, facing a fourth-and-5, took a 9-yard sack instead of trying to make a play down the field or throwing the ball away and preventing the loss. Despite the win, there remain big questions about Bridgewater's future as the team's starting QB.

The Panthers played what Rhule described as winning December football against Washington, running the ball 35 times, playing solid defense and forcing three turnovers. “I think the biggest thing we did was impose our will," Bridgewater added. "We said we wanted to make it a physical game. It was a playoff atmosphere as far as we knew that those guys were playing for something big and we knew that coming in we wanted to be a physical team.”

With the win, the Panthers' projected 2021 draft pick fell from No. 4 to No. 9, although that doesn't bother Rhule. “I think teams that have historically tried to lose to improve their draft pick, hasn’t really worked out for many teams. Winning franchises win. They win at everything. It’s hard for me to even think that way because it’s just something my mind doesn’t work that way. We’re here to win," he said.

Panthers defensive end Brian Burns played through a shoulder injury and had his team-high ninth sack against Washington on Sunday. The 22-year-old Burns appeared to reinjure the shoulder during the game, but is hopeful he can play through the injury and finish out the season.

12 — Number of games missed this season because of injuries by Christian McCaffrey, who became the NFL's highest-paid running back last offseason when he signed a $64 million contract.

The Panthers will continue to play their starters on Sunday against the Saints even though they don't have anything to play for.