Panthers get goalie Sergei Bobrovsky back on the ice 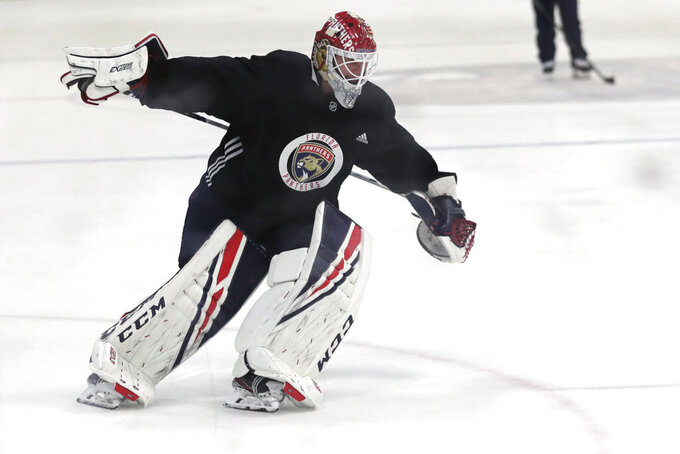 FILE - Florida Panthers goaltender Sergei Bobrovsky skates during NHL hockey practice in Coral Springs, Fla., in this July 17, 2020, file photo. The Florida Panthers got goaltender Sergei Bobrovsky back Wednesday, Jan. 13, 2021, the two-time Vezina Trophy winner joining the club on the ice for the first time since training camp started. He had been on the “unfit to play” list for the first nine days of camp. (AP Photo/Lynne Sladky, File)

SUNRISE, Fla. (AP) — The Florida Panthers got goaltender Sergei Bobrovsky back Wednesday, the two-time Vezina Trophy winner joining the club on the ice for the first time since training camp started.

Bobrovsky had been on the team’s “unfit to play” list since camp began Jan. 3. That term covers anyone who didn’t participate in camp for any reason, whether it was injury or something related to COVID-19 — either a positive test or potential exposure.

Whatever the reason, Bobrovsky is cleared now. He was on the ice well before the morning practice started, going through some drills and technique work, then remained with teammates for the full-squad session.

“It’s great to be back and I felt good,” Bobrovsky said. “Just a few more practices and I’ll be ready to go.”

Bobrovsky spent more than 90 minutes on the ice, and Panthers coach Joel Quenneville said he was surprised to see how much work his goalie was able to handle after the layoff.

“I was impressed that he was able to sustain it,” Quenneville said.

Florida was scheduled to begin the season at home Thursday against Dallas, a two-game set that was postponed because the Stars were dealing with a COVID-19 outbreak — 17 positive cases, forcing them to close their facility.

The Panthers’ opener has since been pushed back to Sunday against Chicago, so Bobrovsky has a few more days to get ready and a determination will be made in part after the team sees how well he feels Thursday. If he can’t go Sunday, Florida would likely have Chris Driedger or Sam Montembeault in net for the opener against the Blackhawks.

“I think he’s more than excited to get the season going and do what he has to do,” Quenneville said. “He’s approached it the right way.”

Bobrovsky struggled last season, his save percentage of .900 being the second worst of his career and his 3.23 goals-against average was three-quarters of a goal higher than his career rate entering the 2019-20 season. He allowed nearly as many goals in 50 games last season (151) as he did in 62 games with Columbus in the previous season (153).

But getting him back with the club was a lift Wednesday, Quenneville said, and Bobrovsky said he was relieved that his wait was finally over.

“It’s definitely not easy, knowing your teammates are working hard and hustling and getting ready and you are kind of out of action,” Bobrovsky said. “It’s not easy but I’m glad that it’s behind me. I’m very excited to be here and it was a great practice.”