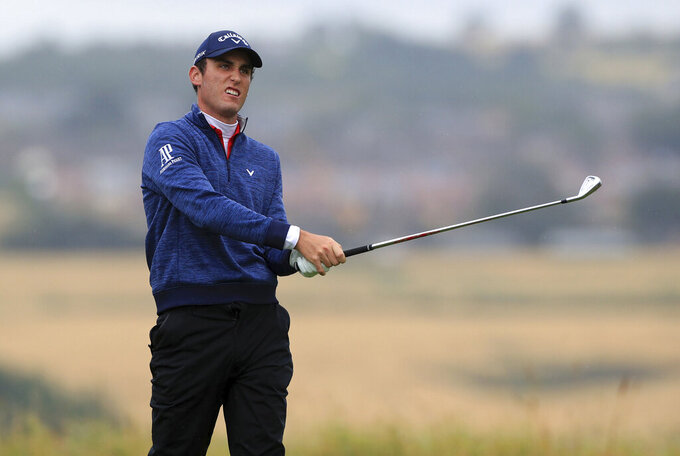 Italy's Renato Paratore watches the flight of his ball on the 4th during day two of the British Masters golf tournament at Close House Golf Club near Newcastle, England, Thursday July 23, 2020. The European Tour resumed after its pandemic-induced shutdown, with social distancing among the special measures for the British Masters. (Mike Egerton/PA via AP) 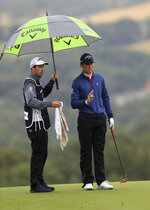 NEWCASTLE-UPON-TYNE, England (AP) — English golfer Dale Whitnell had an eagle and five birdies for a 7-under 64 in the second round of the British Masters to move second at Close House Golf Course on Thursday.

Whitnell is 10 under par at the halfway stage, a shot behind Italy’s Renato Paratore (66), on the European Tour’s full return to action.

The 31-year-old Whitnell played on the 2009 Walker Cup team alongside Tommy Fleetwood but struggled to establish himself in the professional ranks and was forced to take on a courier job for 10 months to make ends meet.

A victory on the Portugal Pro Golf Tour earned him five Challenge Tour invites in 2019 and he won the KPMG Trophy last September before claiming his European Tour card from the qualifying school.

“I’ve been working hard on my game and this course suits me because it’s a little bit fiddly in places,” said Whitnell, who had not earned anything from five events in 2020 before the circuit shut down due to the coronavirus pandemic.

“The peaks and troughs of the golf profession are very interesting. You’ve just got to try to deal with it the best you can," Whitnell said. “I love the game, I wouldn’t be here if I didn’t and my amateur career speaks for itself.”

South Africa’s Justin Harding fired a brilliant 63, the lowest round of the week so far, to sit alongside Whitnell on 10 under.

Tournament host and club member Lee Westwood was in danger of making an early exit after a double bogey on the first, but the 47-year-old fought back to shoot 71 and make the cut on the mark of 1 under.

The European Tour’s strict health protocols have been applauded, but did lead to the withdrawal of England’s Andrew Johnston after nine holes of his opening round.

Johnston, who opened up last year about the mental health issues that followed his rapid rise to fame after winning the 2016 Spanish Open, said: “Being here and being confined to the hotel and course and not being able to bring my family is ultimately not what I want at this moment.

“I’m struggling to get my head around it all. One minute I’m coming out of lockdown, going out for dinner, and then the next I’m back in lockdown in a hotel room.”

Sweden’s Marcus Kinhult, the 98th-ranked defending champion and one of only three players inside the world’s top 100 featuring this week along with No. 82-ranked Eddie Pepperell, shot another 2-under 69. Pepperell (69) is on 6 under for a share of 13th place.

Miguel Ángel Jiménez (71), making his 706th appearance on the European Tour to tie the record of Sam Torrance, is tied for 35th on 3 under.

Former US Open champion Michael Campbell (80) missed the cut after a first-round 68.

The tournament marks the start of the European Tour’s “U.K. Swing,” a series of six events played in England and Wales over the next six weeks devised primarily for ease of travel for players amid the coronavirus pandemic.

Most of Europe’s elite are in the United States ahead of a World Golf Championship in Tennessee, where the prize fund of $10.5 million is around 7½ times that of the British Masters, and then the PGA Championship in San Francisco starting on Aug. 6.