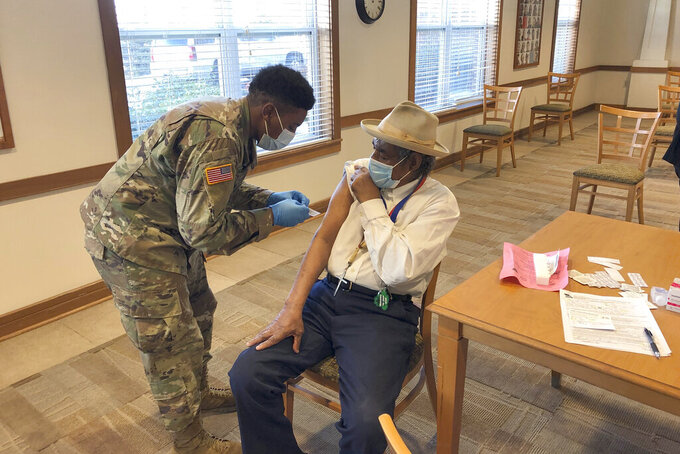 ST. LOUIS (AP) — Missouri Gov. Mike Parson visited a St. Louis vaccination site Thursday and sounded optimistic about getting shots as soon as possible to all residents, even as critics in urban areas have complained that rural parts of the state are getting more than their proportional share.

The Republican governor met with residents and members of the Missouri National Guard who were giving shots at a vaccination clinic set up at Cambridge Senior Living near downtown St. Louis.

“Things are getting better,” Parson said afterward. “We're getting more vaccine in the state all the way around.”

Parson told reporters at the Capitol later Thursday that he expects the state to get 50,000 of the single-dose Johnson & Johnson vaccines this week. Moving forward, he said 15% of vaccines will go to pharmacies throughout the state to help ramp up vaccinations.

Political and civic leaders in St. Louis and Kansas City have complained for weeks that their regions aren’t getting enough vaccine, citing cases of people driving hundreds of miles to rural towns to get shots. On Tuesday, Kansas City Mayor Quinton Lucas asked the Federal Emergency Management Agency to set up mass vaccination sites in his city, saying urban residents are being underserved by the state.

Parson has denied favoritism toward rural areas, maintaining that the rollout has been proportional to population across the state. He reiterated those claims in remarks to reporters after the St. Louis visit.

“Any time you look at a major populated area ... it's going to take longer to get through the process just simply because of the population,” Parson said. “We know that.”

Still, Parson later acknowledged to reporters at the Capitol that there tends to be higher interest in getting the vaccine to Missouri's urban areas.

Next week, the state will start moving more mass vaccination teams to the Kansas City and St. Louis areas to accommodate higher interest, with the goal of eventually having two teams in the Kansas City region and three in St. Louis, he said.

Targeted vaccination sites under Missouri’s plan provide vaccines to vulnerable populations in St. Louis and Kansas City. The inoculation goals at those events are far more modest than those at the mass vaccination sites run by the Missouri National Guard. While those sites can provide up to 2,500 daily doses, the targeted sites provide up to 160 inoculations per day, according to the governor’s website.

Among those getting a shot Thursday in St. Louis was the Rev. Oliver Savage, a 75-year-old resident of the center.

“I want to remember this day, the day I got the shot," Savage told Richard Waithira, the 19-year-old guardsman who administered it. Afterward, Savage said it stung a little, but was worth it.

The state on Thursday cited 467 newly confirmed cases of COVID-19, and two new deaths. All told, Missouri has reported 479,536 confirmed case and 8,150 deaths since the pandemic began.

New cases have been dropping since the virus peaked in the state in November, when they at times exceeded 6,000 per day.

Missouri health department director Dr. Randall Williams attributed the decline in part to mask-wearing, social distancing and other prevention efforts. He said that needs to continue, even as vaccines become more widely available and cases drop.

“This is not the time to relax,” Williams said.

The St. Louis Cardinals announced that they’ve received approval from the city to fill Busch Stadium at 32% capacity starting with the home opener on April 8 against the Milwaukee Brewers.

City health director Dr. Fredrick Echols said new COVID-19 infections have been declining and the positivity rate in St. Louis dipped below 5% for the first time since mid-September.

Season ticket holders will get the first crack at tickets for the first two homestands. The Cardinals said fans will be seated in pods of four or fewer with at least 6 feet of space between pods. Masks will be required except when eating or drinking.

The Kansas City Royals announced Thursday that they will also allow a limited number of fans into Kauffman Stadium this season.

The Royals said 10,000 fans per game will be allowed in a socially-distanced, pod-style seating arrangement. The capacity will be expanded monthly, as it is safe to do so.

Royals general manger Dayton Moore said he’s excited about getting fans back in the stands.

The Royals open the season at home against Texas on April 1.