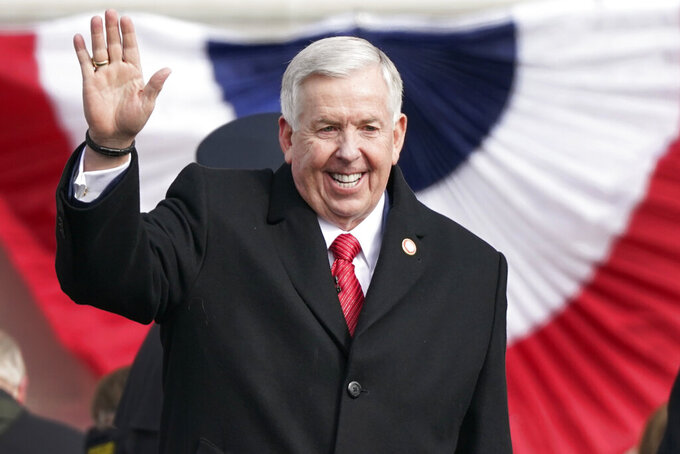 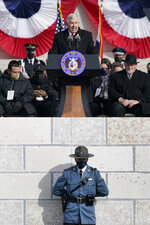 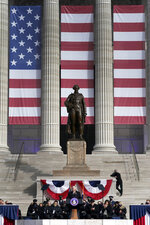 JEFFERSON CITY, Mo. (AP) — Missouri Gov. Mike Parson began a new term in office Monday with an inaugural ceremony marking the start of Missouri's bicentennial celebration, but without a traditional party because of coronavirus precautions.

The Republican governor took the oath of office on the grounds of the recently refurbished Capitol, with church bells ringing and artillery guns firing a salute — just as they have for past governors. He swore on a Bible given to him by his wife, Teresa, and a B-2 bomber flew low over the Capitol.

There was no inaugural parade, no hand-shaking reception line with the general public and no inaugural ball, where the governor and lawmakers typically don fancy apparel to dance in the cramped Capitol Rotunda. All of those festivities were canceled or postponed because of concerns about the coronavirus pandemic.

In his speech, Parson acknowledged the challenges facing many people while optimistically forecasting that “sunny days are ahead.”

“This is our time to preserve the American dream,” Parson said.

Parson said he would work to provide the tools needed for doctors and nurses, law enforcement officers, farmers and teachers. He said his job is to make life better for every Missourian.

“I will care for the unborn to the elderly, the rich to the poor, regardless of the color of your skin,” he said.

“At this critical juncture in our history, we need leaders who will unequivocally and vocally oppose domestic terrorism,” she said in a statement. "On the first day of his new term, Governor Parson failed to do so, and Missourians should demand to know why.”

While speaking to reporters later Monday, Parson repeated his criticism of lawbreakers who stormed the Capitol.

State officials hope that by this August enough people will have been vaccinated against the coronavirus to safely hold a more elaborate celebration. It would coincide with the 200th anniversary of Missouri's official admittance to the United States on Aug. 10, 1821. The state recently completed a five-year, $54 million renovation of the century-old Capitol and its monuments.

Parson, 65, won election to a full four-year term in November by easily defeating Democratic State Auditor Nicole Galloway, who attended his inauguration. Parson had been elected lieutenant governor in 2016 but ascended to the top spot on June 1, 2018, when Republican Gov. Eric Greitens resigned while facing potential impeachment over allegations of sexual and political misconduct.

More than 6,000 people had gathered at the Capitol for Greitens' inauguration.

The crowd for Parson's celebration appeared shy of the 2,000 who had told his inaugural committee they were coming. Many attendees sat spaced apart. Most wore masks, as had been encouraged because of the coronavirus.

The event still was bigger than some inaugural ceremonies elsewhere. Democratic North Carolina Gov. Roy Cooper's inauguration Saturday was accessible to the public only by television or online, and his inaugural speech was pre-recorded.

Parson's privately funded committee said it expects to spend about $200,000 on the inauguration, with donors to be disclosed later.

The ceremony also included the inauguration of other statewide executives who won election in the fall — Lt. Gov. Mike Kehoe, Secretary of State Jay Ashcroft, Treasurer Scott Fitzpatrick and Attorney General Eric Schmitt. All are Republicans.

In a nod to the bicentennial, the ceremony featured a speech by Gary Kremer, executive director of the State Historical Society of Missouri.

Kremer said Missouri has an opportunity this year to show how its diversity of race, religion, culture and geography is a source of strength, not division.

“Our diversity should not and must not divide us,” he said.

Parson's speech was about twice as long, though still relatively short by modern standards. He later told reporters that his policy goals this year include improving roads, early childhood education and access to telehealth, which connects people virtually to doctors.

Parson plans to lay out a more detailed agenda when he delivers his State of the State address on Jan. 27.

Parson was born in rural Wheatland, Missouri, where he graduated from high school in 1973. He served six years in the Army and was sheriff of Polk County from 1993-2005. He then spent a combined 12 years in the Missouri House and Senate before winning election as lieutenant governor.